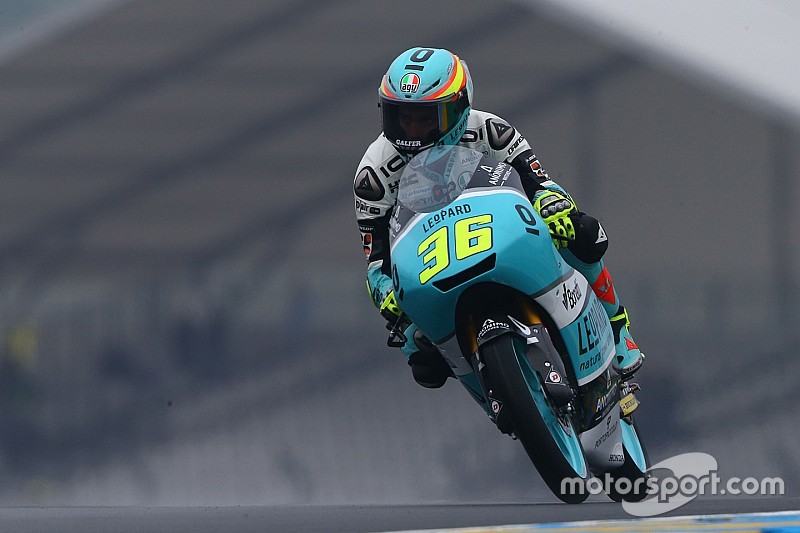 Moto3 points leader Joan Mir extended his lead at the top of the standings, winning a crash-filled Le Mans race that was suspended after an early pile-up.

An oil spill at Turn 6 led to a large number of riders hitting the deck on the second lap of the race, forcing a red flag period.

Poleman Jorge Martin had led off the line initially, but was passed by Romano Fenati into Turn 2, the pair leading the field during the opening lap.

Further back, however, a four-bike crash happened on exit of the chicane, with Tatsuki Suzuki tumbling and sending the bike of Adam Norrodin into Lorenzo Dalla Porta.

Dalla Porta fell right into the path of Jakub Kornfeil as a result, the front wheel of Kornfeil's Peugeot bike hitting against the Italian rider's head and back – although that did not stop Dalla Porta from immediately trying to remount his bike after the crash.

The rest of those involved also tried to carry on, with Norrodin's bike leaking fluid at Turn 6 – and, as the field went back around, the crashing started.

Third-placed Mir fell at the La Chapelle Turn 6 early in the corner, with Martin and then Fenati following suit further up the road.

A large number of riders then went down under braking in quick succession, their bikes released up the escape road and making contact with several of the riders recovering from their respective crashes, with Mir taking a hit and Niccolo Antonelli having to duck away from a fast-approaching bike.

Yet, despite several riders visiting the medical centre, all were declared fit for the initial restart – and the race was soon back underway after clean-up, with only Norrodin not featuring.

Martin again led the way initially, but Fenati was back into first soon enough. The poleman stuck with the Italian at first, before high-siding out of contention in his second Turn 6 shunt of the race.

That briefly left Fenati a clear leader, but Mir soon began to edge closer to the Italian, with the rest of the pack left behind. And when the gap between the two leaders was down to 0.6s, Fenati lost the front at Turn 7, leaving Mir with a handy three-second advantage to see out the race.

Mir obliged, gradually increasing his lead over the rest of the race and bringing it home 4.2s ahead – but while it was a comfortable final few laps from him, those right behind put on a show.

Darryn Binder and Aron Canet initially scrapped for runner-up but both slumped down the order, with Binder's teammate Marcos Ramirez and Fabio di Giannantonio emerging as the main contenders.

Binder and Canet were back in the fight on the final lap however, and while the South African crashed out at Turn 7, Canet came through for a second-place finish.

Di Giannantonio, who was the only rider in the lead pack not to crash during the initial oil spill, held on to third from Ramirez.

Juanfran Guevara took fifth, ahead of Enea Bastianini, who was in the thick of the podium fight before narrowly saving a likely high-side late on.