“Escaping” Marquez in race will be “difficult” - Yamaha 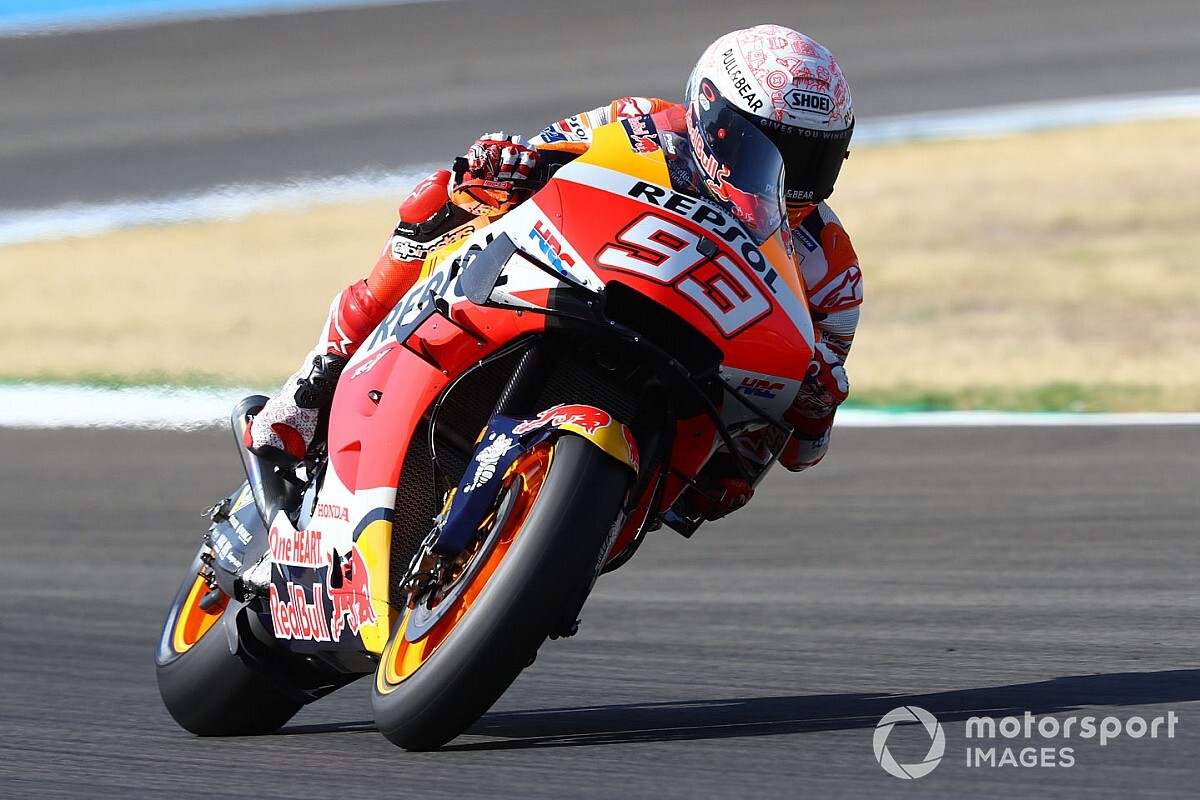 Poleman Fabio Quartararo admits it will be "so difficult" to "escape" Marc Marquez in Sunday's MotoGP Spanish Grand Prix because of the Honda's pace and the Yamaha's speed deficit.

Marquez put in a devastating race run in Saturday's FP4 session of high 1m37s and low 1m38s laps on used soft rubber, with no one showing the same consistency as the Honda rider.

Yamaha has shown to have good pace across the Jerez weekend, with Quartararo demolishing the lap record for pole, while Maverick Vinales put his works M1 into second ahead of Marquez.

But Friday revealed the M1 to be the slowest bike through the speed trap at Jerez, with Quartararo some 12km/h slower than the Ducati of Andrea Dovizioso.

As a result, Quartararo hopes to thin the heard in the opening stages of Sunday's race to avoid getting swallowed up in the pack and allowing Marquez to put his searing pace into practice.

"Well, looking at the pace of Marc it will be difficult to escape, because he's already faster than us," the Petronas SRT rider said after qualifying.

"I think the most important is to make a good start, good first laps, and then see how to manage the race.

"But to escape from Marc tomorrow will be so difficult because, on paper, he is faster.

"But it's difficult to plan because the top speed [of the Yamaha] is not the best.

"So, we will try to make the [lead] group as small as possible, and then we will see what happens in the race."

Vinales echoed his Yamaha stablemate's comments, and emphasized the need to keep the rear tyre from overheating – which was a common problem in recent years for Yamaha, though both Vinales and Quartararo at least appear to have made a step forward in this area.

"As Fabio said, the first laps are important for us, so we will try to be in front from the first corner, trying to put three, four laps really fast," Vinales added.

"And then it's going to be important to maintain the tyres in a good temperature because here with the tyres it's very easy to overheat the rear tyre.

"As he said, very difficult if we want to escape from Marc because Marc has a very good rhythm."

In last year's Malaysian GP, Quartararo slid back from pole to a distant sixth owing to front tyre pressure issues brought on by following other riders.

But, when asked by Motorsport.com if he was worried of a repeat, Quartararo says the nature of Jerez – despite track temperatures exceeding 50 degrees Celsius – should stop that from happening.

"Honestly, last year we struggled with overheating the front tyre, but was more in tracks like Mugello, Malaysia, with long straights where you have a lot of slipstreaming," he said.

"But in this kind of track, even if it's really hot, we don't have really the pressure and overheating in the front.

"So, honestly, in this track it's not a problem. At the moment, we have no struggles in this area."