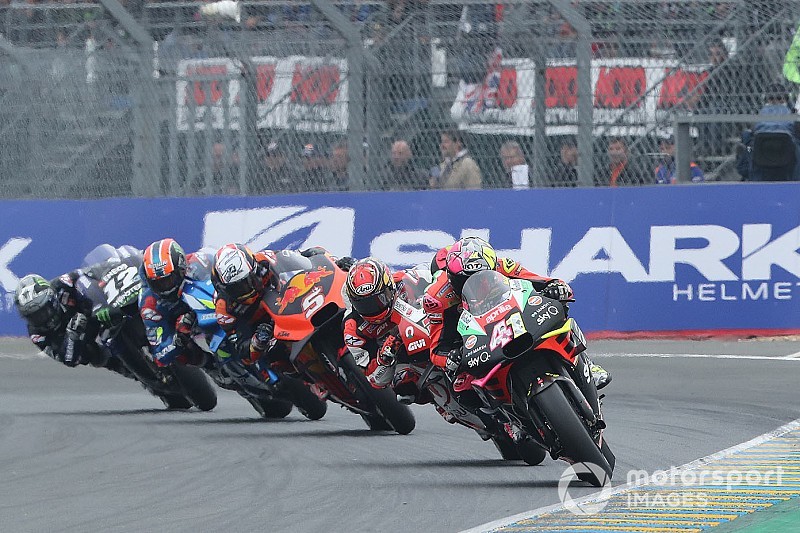 Aprilia MotoGP rider Aleix Espargaro said it was “really painful” to finish nearly half a minute behind race winner Marc Marquez in the French Grand Prix.

Espargaro brought the RS-GP home in 12th place in Le Mans, but this was despite a dramatic drop-off in pace towards the end of the race that left him classified 29.512s seconds behind Marquez and 14 seconds behind 11th-placed Jorge Lorenzo.

While the gap had been exacerbated by an off at Chemin aux Boeufs and a subsequent 1.4-second penalty for track limits, Espargaro conceded he had been “unbelievably slow” in the race.

“Very frustrated. I did my best, I tried everything since the beginning of the race,” Espargaro told Motorsport.com.

“Our problem is the rear grip. I had no grip all race, was no way for me to follow them [the riders ahead], as soon as I touch the throttle the bike slide, it's nothing more that I can do.

“I really give my 100 percent, but the gap to the top 10 guys - because everybody in front of me was very far - has been too big.”

Espargaro says being forced to run the soft front tyre due to the cold conditions hampered him – as it deteriorated just before halfway – but stressed this was not the main reason for the poor showing.

“In Moto3, Moto2 many many crashes, and with this also cold air was no way to use the medium tyre.

“I was praying for just four-five degrees more but 18 degrees [track temperature in Celsius], it's one of the coldest races I ever did in MotoGP, and the only option was the soft tyre, and didn't help me at all.

“But anyway was not our biggest problem. Our biggest problem is the rear grip, lack of grip is huge. And everybody race on the same [soft] rear tyre, so the 29 seconds [to Marquez], really painful.”

Teammate Andrea Iannone, who continues to nurse a left ankle injury after a big crash at Jerez, dropped out of the race after eight laps, having just surrendered 16th place to Hafizh Syahrin.

“We decide before the race, in case a complete difficult situation, it's better for us not continue and arrive in better condition in Mugello, because it's our home race."