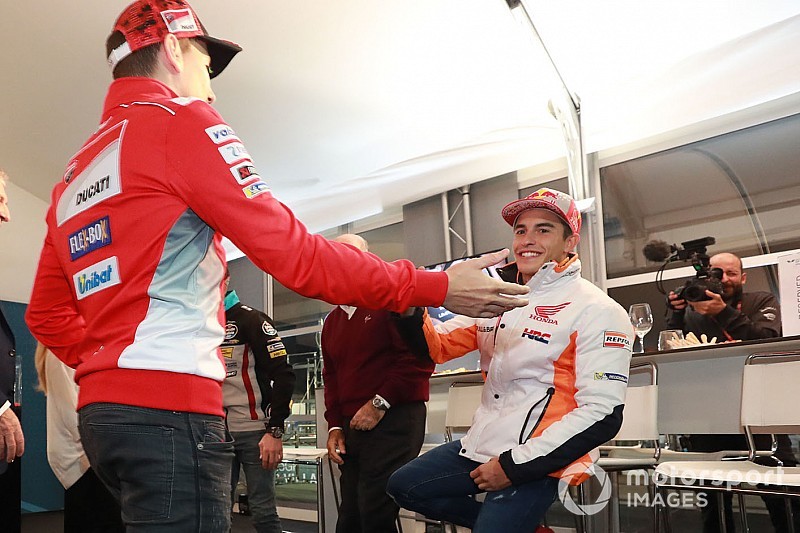 MotoGP champion Marc Marquez and his new Honda teammate Jorge Lorenzo have both confirmed they won't be fully fit in time for the Valencia post-season test.

Marquez crashed in both qualifying and race during the Valencia season finale, walking away from both accidents with pain in his left shoulder, which is set to be operated on in December.

Lorenzo, meanwhile, is still recovering from injuries sustained at Aragon and Thailand, which forced him to skip four races and meant he could only finish 12th on his return in the season finale.

The new Honda signing said his condition has improved a lot during the Valencia race weekend and while he will still not be at his best physical level, the two-day test on Tuesday and Wednesday will still be useful.

"The doctor that operates me [said] normally the injury to heal completely is about six or seven weeks, you have the cast for three weeks, I take out the cast after one week to speed up the recovery and to be able to try [to race in] Malaysia," Lorenzo explained.

"The last 10 days, the evolution of the injury has been very quick, as you could see in the dry condition [in qualifying] I could make a respectable laptime.

"Every day that we go through I feel bit improvement, I am a little bit better than yesterday, much better than Friday.

"[Monday] I will be better, for sure Tuesday I will be not 100 percent but I will be able to see some important things and be quite okay."

Marquez admitted that he can't allow more crashes in upcoming tests before his surgery in December.

The reigning world champion said that he will have limited involvement during the Valencia test, and will only try a few things.

"I'm one of the riders that, I like to ride during all the day, Valencia and Jerez are very important tests," Marquez said.

With Cal Crutchlow also out of action with injury and Marc VDS disappearing from the grid, LCR rider Takaaki Nakagami and tester Stefan Bradl are poised to be the only fully fit Honda riders in the test.