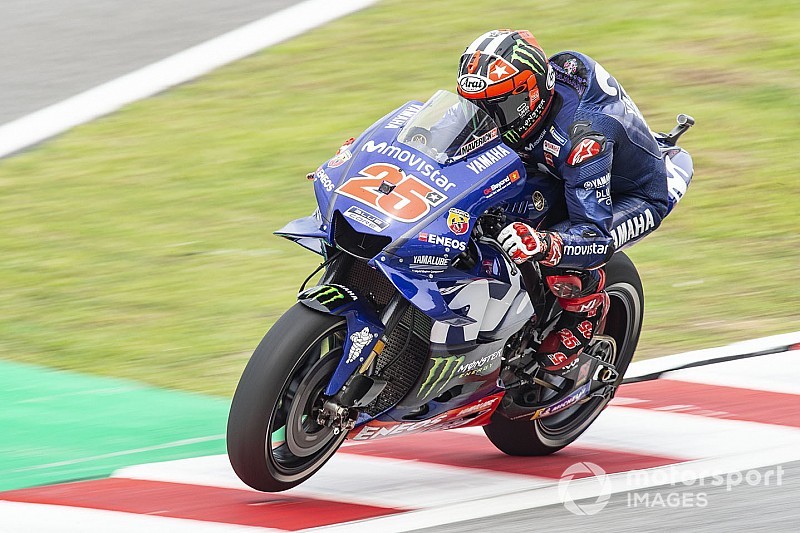 Vinales and Marquez traded times with 20 minutes to go after the Honda rider successfully managed to usurp Vinales’ previous chart-topping benchmark of 2m.00.640s.

However, Vinales immediately shot back, setting a time of 2m00.284s to reclaim the top spot. That lap would remain unbeaten until the final few minutes of the session, when times began to quickly tumble.

Vinales himself managed to break the two-minute barrier, but was immediately bettered by Jack Miller (Pramac), who took over the top of the timesheets with a 1m59.375s flyer.

Marquez threw in a flyer with his own late attempt, but Vinales managed to beat him with a 1m59.231s to end the session fastest of all. Marquez ended 0.026s behind in second, while Miller’s previous benchmark put him third in the timesheets.

Dani Pedrosa (Honda) earned himself a Q2 berth by ending fourth in both the session and the combined standings, his time of 1m59.599s ending up 0.224s behind Vinales’ best.

Tech3’s Johann Zarco was fifth ahead of Pramac rider Danilo Petrucci and the second factory Yamaha of Valentino Rossi, while Andrea Iannone was classified eighth for Suzuki.

Iannone held on to the final Q2 spot from Alvaro Bautista (Angel Nieto), who finished ninth in the session and 11th overall.

The top 10 was completed by Franco Morbidelli (Marc VDS).

Jorge Lorenzo’s replacement Michele Pirro ended up 16th fastest in the session after suffering a slide at the final corner.

Sepang MotoGP qualifying as it happened