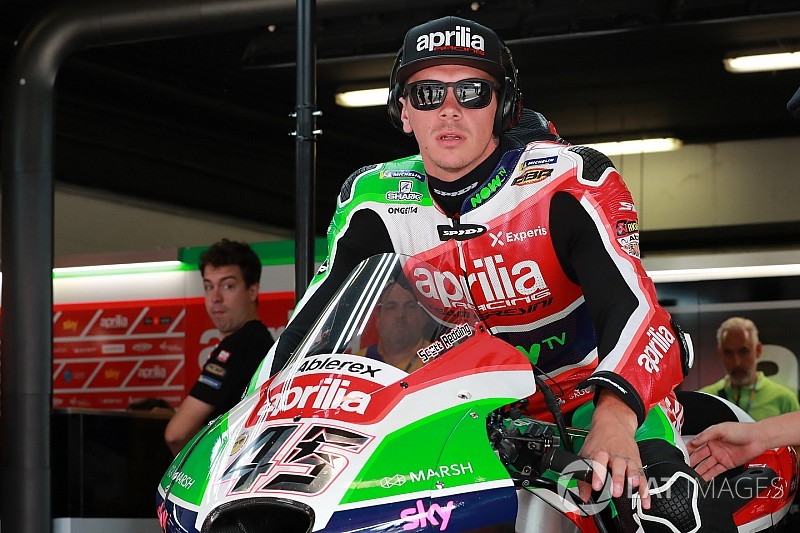 Aprilia rider Scott Redding admits he is concerned about his longer-term prospects in motorcycle racing, with the Brit expected to leave MotoGP and doubting he'll have a chance to return.

The 25-year-old will lose his Aprilia seat to Andrea Iannone next year, and has no obvious opportunities to continue a premier-class career that began back in 2014.

While compatriot Bradley Smith, who will be replaced at the KTM factory team by Johann Zarco, is open to calling time on his competitive career after 2018, Redding stressed that he conversely has no interest in retirement.

“I'm 25, I'm fucking dumb as dogshit, I haven't done anything at school, so I cannot even go to get a normal job even if I wanted that,” he said in Barcelona.

“I've no idea about most things in life, and that's the way it is. I know that, that's why I need to try and see what's the best from my future, that makes me happy, and makes me to secure a bit of a future, and still be racing.

“I've been born and bred racing, that's my problem, it's hard to walk away from.”

Redding says that, following Aprilia's Iannone announcement, his initial idea was a return to Moto2, where he was runner-up in 2013 – but he admits such a move comes with a complicated a longer-term perspective.

“I was really fixed a lot on going to Moto2. That was my mindset immediately when I found out I won't be here - because there's not really a ride going to be for me in MotoGP, and to be honest I don't enjoy to be in MotoGP, because I'm never going to get a bike that can really win races.

“Because no one is going to take me back in MotoGP because of my past. I've not really set it on fire. I've not had the material to really show, but there's already the doubt and they'll take a young guy coming up - like Suzuki signed [Joan] Mir, he didn't even do four races in the season on Moto2.

“So I need to maybe look at Superbikes. Again, it's difficult, because you need again a good bike.

“I was definitely fixed [on] Moto2, but the more I think about it, the more I will hinder myself. Short[-term] vision - good idea, go, try to take the title.

“But then if I look beyond there, I have not many options to do something. I should think about Superbikes and see what to do.”

Asked whether he'd consider a national-level category like MotoAmerica or British Superbikes, Redding revealed he'd actually had an offer from a team in the latter series – but reckoned it would “too far of a step back”.

“If I was going for a - not a hobby, but just doing it because I love to do it, okay. But if you still want to prove to a lot of people out there what you've got, cannot really do it. I haven't considered it at all.

“I had an offer actually from British Superbikes but I've said for me it's too far of a step to go back that way for the moment. But everything is open at the moment.”

Morbidelli could be "another Zarco" with Yamaha move