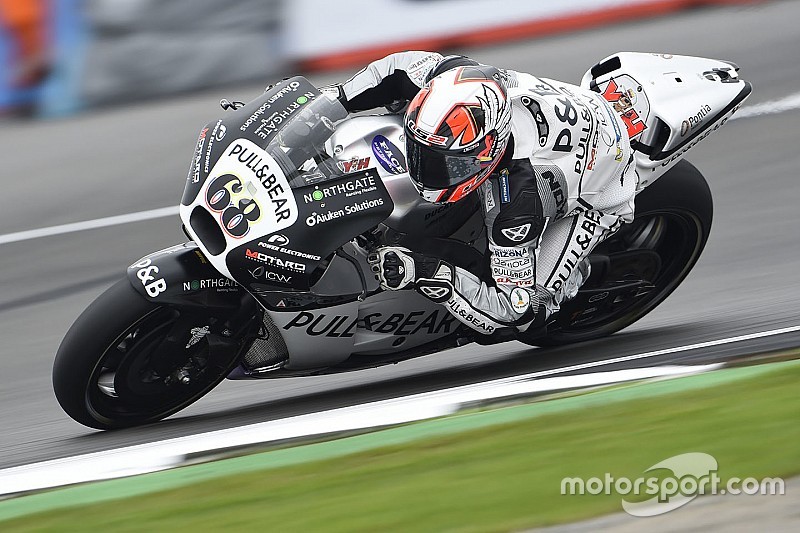 Aspar Ducati rider Yonny Hernandez led the way in Sunday morning's warm-up for the British Grand Prix, which was hit by rain showers.

The Colombian's best time of 2m15.285s came shortly before the arrival of rain, which effectively scuppered the hopes of those who had wanted to use the 20-minute session to hone their dry set-ups.

Loris Baz (Avintia Ducati) and Andrea Dovizioso on the best of the factory machines were the only others to set representative times before the rain arrived, the Frenchman going second fastest.

Dovizioso had been set for third, but was demoted by MotoGP debutant Alex Lowes on the British rider's final lap, which was only 0.797s off the pace despite the worsening weather.

That demoted Dovizioso to fourth, ahead of Jorge Lorenzo, who was 1.830s off the pace on the best of the Yamahas, and Scott Redding's Pramac Ducati.

The other works Ducati of Andrea Iannone was seventh quickest, the Italian dropping from fourth after a low-side crash at Copse.

Only 12 riders set laptimes, with poleman Cal Crutchlow, front row starter Maverick Vinales (Suzuki) and points leader (Marc Marquez) among those not to feature on the timesheets at all.

Valentino Rossi ventured out to set a time late in the session, but was only 11th quickest, 5.434s off the pace.