Repsol Honda rider Casey Stoner grabbed his 30th pole position of his MotoGP career in today's qualifying session for the GP Aperol di San Marino e della Riviera di Rimini at the Misano circuit where he set a blisteringly fast 1m 33.138s lap in front of his main rival in this year's championship, Jorge Lorenzo (1m 33.258s) on the Yamaha Factory Racing YZR-M1. Stoner and Lorenzo swapped top spot number of times during the session with the Australian's teammate Dani Pedrosa following close behind and eventually rounding out the front row (1m 33.318s).

"It will be a tough race," said Stoner, "Dani and Jorge are both running very well so I'll try to get a good start but there are a few more overtaking opportunities here at Misano, it's not a track with only one line. The weekend on a whole is going well, tomorrow we'll have to decide on tyres depending on what the weather is doing, hopefully it will cool down a little which would be nice!"

I think we can be competitive tomorrow and try to finish in front of Casey so that's our aim.

Lorenzo predicted a difficult race tomorrow as well, which the Spaniard hopes will help him get in front of Stoner, "I think we can be competitive tomorrow and try to finish in front of Casey so that's our aim. The weather conditions are being very tough this weekend, it might even rain tomorrow. The race will be very difficult in all aspects."

Pedrosa was satisfied with his performance and on achieving a front row start stating, "I'm happy with the qualifying session, I spent most of the time working on the tyres, swapping from the soft to the medium compound, trying to find the right one for tomorrow; normally before the qualifying session you have almost decided, but here it's been more difficult because of the weather and track conditions. We were working on that a lot this afternoon and in the last couple of laps I was pushing to be on the front row. We've made it, which is very important here because the first corners are very tight, and the times between the three of us are very close, so that's positive. For race pace, Casey and Jorge are still slightly faster than me, but we will look for something more on the settings tonight and try to be with them tomorrow for whole race."

The second row also holds the very familiar machines of 4th place Ben Spies (Yamaha Factory Racing) who set a best time of 1m 33.947s ahead of the first of the satellite bikes ridden by Marco Simoncelli on his San Carlo Honda Gresini RCV212V on 1m 33.990s lap. Claiming the final spot on the second row was the third of the Repsol Honda riders Andrea Dovizioso with his best time of 1m 34.026s. 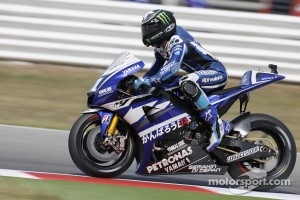 "I’m glad we got it done and got on the second row but I’m not happy about how many risks I had to take to get there," admitted Spies. "The bike’s there, we can see it, Jorge’s going fast and I feel good, we just have to get my setting comfortable. We’ve got all night to work on it and see what we can do for tomorrow."

Dovizioso has one goal for the race, "Tomorrow it will crucial to make a good start and try to stay with the front riders." The Italian rider then added, "We will continue working but the good point is that we are more competitive in the race pace than in using the soft compound for the qualifying. With these high temperatures and humidity the race will be really tough tomorrow. I hope that the Italian spectators will give me an extra boost.”

The first rider to announce his future MotoGP career, Colin Edwards, who is to ride a new CRT rules-based motorcycle in next year's championship, starts tomorrow's race in 7th place after registering a 1m 34.054s for the Monster Yamaha Tech 3 team. Meanwhile Spain's Alvaro Bautista (Rizla Suzuki) continues his resurgence and was sitting in 4th place at the midway point and eventually ending up in 8th place on a best time of 1m 34.360s. The best Ducati was once again that of satellite squad Mapfre Aspar's Hector Barbera on a lap of 1m 34.592s and final spot on the third row. 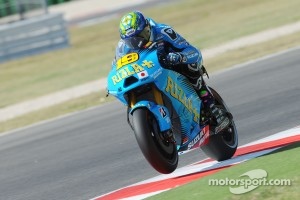 "At the end I couldn’t make a best lap because there was a bit of traffic and some slower riders that I couldn’t get past, so I lost the chance to make a good lap-time," said Bautista. "I think we have a good set-up for tomorrow and the grid position is even better than last week, so if I get a good start I think I can push right up there. I want to stay with the front guys for the maximum amount of time as possible and make a race and get a result like Indy – or even better!”

Hirsoshi Aoyama (San Carlo Honda Gresini) managed to grab the last place in the top ten setting a best time of 1m 34.637s to start the race tomorrow in front of Ducati Marlboro rider Valentino Rossi (1m 34.676s), who is racing this weekend at what is his home track with his hometown of Tavulia just a short distance away from the Misano circuit. Sitting just behind Rossi was another Ducati, that of Karel Abraham for the Cardion AB Motoracing team with his best lap of 1m 34.727s.

"I was a little unfortunate on what would have been my fast lap," explained Rossi, "because after three good sectors, I came upon De Puniet going slow in the final hairpin before the last two left-handers, and there alone I lost half a second. Otherwise I could have done a 1:34.0 and started from the third row, which is what we had set out to do. Anyway, I’m not too bad in terms of pace, so we’ll see what we can do in the race tomorrow.”

British rider Cal Crutchlow (Monster Yamaha tech 3) had a low side crash during the session but nevertheless will start in 13th place tomorrow with a best time of 1m 34.791s, ahead of Pramac Racing's Randy De Puniet (1m 34.870s) who also had a front end crash during qualifying but like Crutchlow, he walked away unhurt. Rossi's teammate Nicky Hayden sits in a lowly 15th place ahead of the race tomorrow with the American failing to get his Ducati suited to the Italian circuit (1m 34.955s). Loris Capirossi, who announced he would retire from racing at the end of the season, sits in 16th place after recording a best time of 1m 35.502s and ahead of last place man Toni Elias (LCR Honda) with a 1m 36.167s lap.