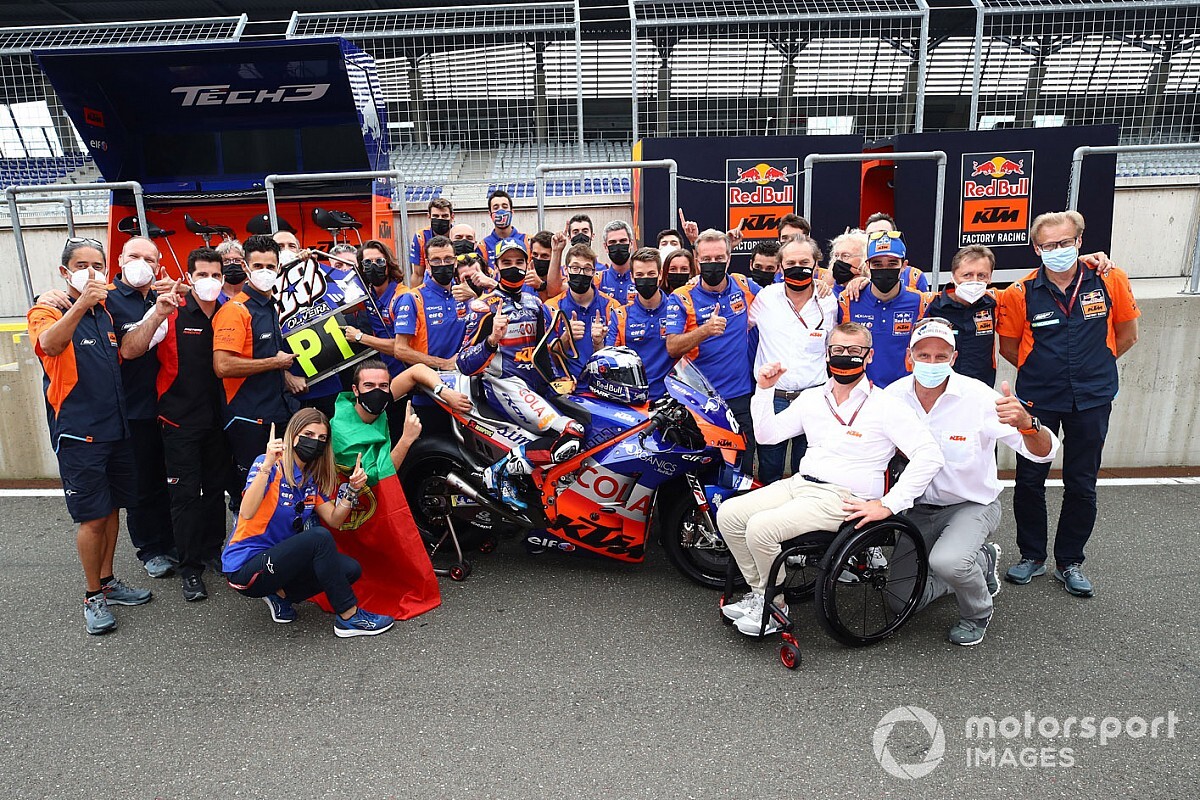 Tech 3 boss Herve Poncharal is "very happy" to have been able to give "underrated" Miguel Oliveira a chance to "show he's a MotoGP rider" with his Styrian Grand Prix win.

Oliveira snatched a maiden win for himself and the popular Tech 3 outfit at the last corner of a thrilling Styrian Grand Prix last Sunday, capitalising when Jack Miller pushed Pol Espargaro wide at the final corner.

The Tech 3 sophomore lost possible podium shots in the Andalusian and Austrian Grands Prix due to racing incidents with fellow KTM riders Brad Binder and Espargaro.

Poncharal says he felt Oliveira was "underrated" by those outside of Tech 3 and the "perception" of the Portuguese rider has been one of doubt over his credentials as frontrunning talent in MotoGP.

"I don't want to blame anyone," Poncharal told Motorsport.com in an exclusive interview. "He was a little bit underrated, because the results were not as good as the ones from Brad for example.

"But we knew why, because race two in Jerez we were fifth [on the grid] and he was out of the race after a Turn 1 incident, he couldn't show anything and I believe we would have been very close to a podium finish.

"Then we arrived in Czech Republic, he did a mistake in FP3 and then a very poor grid position [in qualifying] and then he did a fantastic race, but only ended up sixth.

"Austria race one, another racing incident, [this time] with Pol.

"So, this is why I was really happy because this guy I'm telling you has the speed. But also, he's a cool guy, he's a polite guy, he's a clever guy, he has a good education.

"And then the perception of Miguel as a person, maybe some people thought 'Ok, this guy's never going to be a MotoGP winner'.

"And we knew deep inside by sharing the data with all the other three KTM guys and by seeing how he was riding that it was a possibility, and therefore I'm very glad to have given Miguel the possibility to show he is a MotoGP rider and to do it with him before he's moving next year to the factory team makes me really, really happy."

Oliveira's maiden win came in the 900th premier class race and made him the first rider from Portugal to win in MotoGP.

The Tech 3 rider was the first to ascend KTM's ladder through to MotoGP, starting in Red Bull Rookies Cup before mounting title challenges in Moto3 (2016) and in Moto2 (2018) with the Austrian marque ahead of his premier class debut in 2019 with Tech 3.