Johann Zarco admits the "huge" changes he wants to see on his KTM MotoGP bike are unlikely to be ready in time for the first round of the 2019 season in Qatar.

After low-key showings in both post-season tests at Valencia and Jerez last year, Tech 3 Yamaha convert Zarco also had a muted first day of official pre-season running aboard the KTM at Sepang on Wednesday.

He concluded the day's running down in 20th, exactly 1.5 seconds slower than pacesetter Marc Marquez and 10 places lower down the timesheets than his teammate Pol Espargaro.

The Frenchman admitted that KTM had not had time over the winter to implement all the changes he wanted and that it is unlikely these will be in place before next month's opening race in Qatar.

"We are improving, [but] we are not doing big changes at the moment because it’s a lot of work to do and the changes we want to do are quite huge," admitted Zarco.

"The company needs time also, the winter was not enough. At the moment we just confirm where we want to go.

"I think I’m now controlling the bike better and even if we are not having big changes we can do small improvements. I would say we have to wait maybe a bit more than Qatar race.

"It’s part of the game and also the team, all the factory needs to analyse my comments. They can speak many times with Pol and we don’t solve the problem in the same way because we ride very differently."

Having found better confidence with the front end of the RC16 compared to last year's tests, Zarco says it's the middle of the corner where he is now losing the most ground to his rivals.

"I’m trusting the bike more and more," he said. The weak point for me was the front, and now I can try things, I can feel better the front, and I’m not crashing.

"Now we get a better feeling on the front and better control, we struggle with the turning, it’s to make turn the bike that’s difficult for me.

"The middle and the exit [of the corner was where] I was losing the most compared to the different bikes I could follow."

Espargaro's day was punctuated by a crash at Turn 11, something the Spanish rider admitted was simply a consequence of pushing too hard, but he ended the day only seven tenths off the pace.

"I was trying to push to improve the laptime, it was not in the last hour, it was one hour and 30 minutes before the end, so still the track was a little bit hot and I was coming fast, I think too fast, so I lose the front," said Espargaro.

"But anyway, I mean, we tried, for that is the test, to crash and to find the limit, and we found the limit.

"At the moment I am satisfied, most of the things we have tried we take good things and positive info. Even if the test is not going well about the laptimes, you just have to learn, and we are learning quite a lot, so I'm pretty happy." 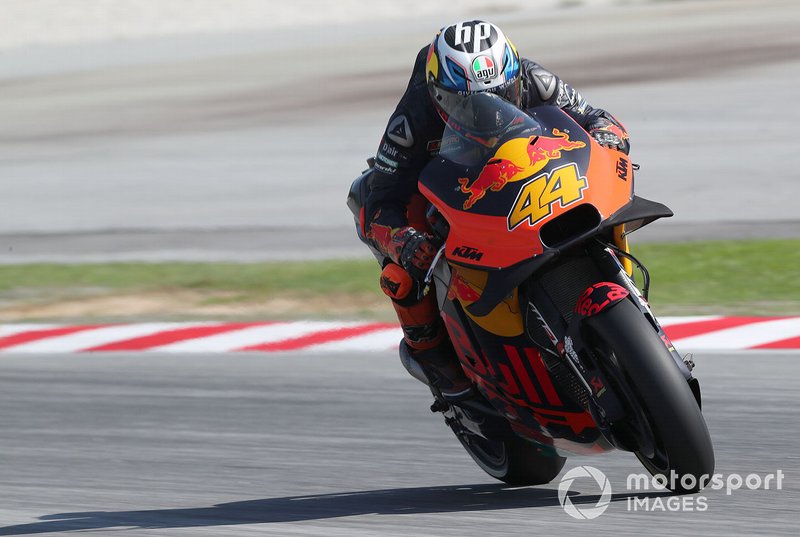