AJ Allmendinger, driver of the No. 43 Best Buy Ford Fusion, attended a media day function at Kentucky Speedway on Wednesday, where he gave his impressions of the facility and how it’s changed since his last visit.

I think just being able to be close to the race cars in general is a good thing.

WHAT ARE YOUR IMPRESSIONS OF KENTUCKY SPEEDWAY TODAY? “It’s cool. It’s been about three years since I’ve been here and just driving in and seeing the parking and what’s going on in the infield with all the updates is impressive. The grandstands, the new offices outside – just from what I remember three years ago to now is absolutely amazing, so I look forward to getting to this place in July when it’s all done and ready to go.”

PIT ROAD IS CLOSER TO THE FANS. WHAT WILL THAT MEAN AS FAR AS THEIR EXPERIENCE? “I think just being able to be close to the race cars in general is a good thing. On pit road, to see the work that actually goes on is great because TV doesn’t really do it justice. To be able to be close enough to see it in person and see what the pit crew does because they’re true athletes and, honestly a little crazy, especially to jump in front of me when I’m driving down pit road, so it’s gonna be really cool. It’s what NASCAR is all about. It’s fan-friendly, it’s exciting, and anything to get fans closer to the action and excited about is what we want.”

HOW HONORED ARE YOU TO DRIVE THE 43? “It’s amazing. For me, I feel very fortunate to wake up every day and be able to get in a race car, especially an Indy car guy. I came from open-wheel, so to think I’m in such a famous number, and, honestly, to have a true legend walk into your hauler every weekend to come and talk to you, whether he’s yelling at you or not, is amazing. I love the history of all sports, and the history of NASCAR especially, and to know I have the man that’s walking into the hauler, and I get to hear stories from him and Dale Inman that fans would die to hear. I get to hear them on a weekly basis, so that’s something that I feel very fortunate about.” 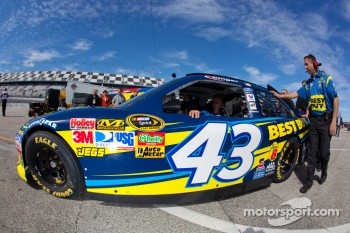 DO YOU FEEL FANS RELATE TO YOU BECAUSE OF WHO YOU DRIVE FOR? “Yeah, and I get fans all the time that come up and say, ‘I’m rooting for you. I’ve been with Richard Petty for 30 years, so I’m rooting for you.’ I’ll take all the fans I can get because I think I’m upwards of 20 or 30 fans right now (laughing), so the more we can get each time is a good thing. It’s something to be a part of Richard Petty Motorsports and have all the great sponsors that we do, but, more importantly, to have the King on your side and single-handedly pick you to drive the 43 is something that when he told me that, it meant the world to me. Now, the next step is we’ve just got to get this thing to Victory Lane so everybody can be happy.”

WHAT DO YOU AND YOUR FELLOW DRIVERS THINK ABOUT COMING TO KENTUCKY? “I can’t really speak on behalf of the other guys, but I know for me it’s cool to always get some new excitement in the series, and we have a lot of great race tracks that we go to, but you need a change and to have a new race like this – a race that I think is gonna be really exciting because the track is wide, there are a lot of grooves, and it’s gonna be three and four-wide racing. I watched the Nationwide race this year on TV and the fan base that showed up for that race was amazing, so I can’t even fathom what it’s gonna be like for the Sprint Cup race. It’s just cool to have some new blood and to have Ford be a part of the race track and re-up and be the official pace car. To be able to come here, it would be awesome for all those reasons to maybe win the first one.”