Almirola looks forward to racing under the lights at Bristol

CONCORD, N.C. (August 20, 2013) - Aric Almirola will head to Tennessee to compete in the famed-Bristol night race this weekend. With a new sponsor on the hood and the heightened excitement of night racing, the No. 43 Ford team looks to bring back speed and a little luck to the fast-action short-track. Almirola will work to keep the fenders of the Petty Blue RainEater Wiper Blades Ford clean and make a run for the win.

Almirola will make his ninth start at Bristol (Tenn.) Motor Speedway this weekend in the No. 43 RainEater Wiper Blades Ford. The driver posted his best finish of eighth at the .53-mile short track in 2008. In March, after driving up through the field, a flat tire ended the team's day early and relegated the team to a 37th-place finish.

Crew Chief Todd Parrott visited Victory Lane at the high-banked short track in 1997 with Dale Jarrett and collected 11 top-five and 15 top-10 finishes in his 32 starts as a crew chief. 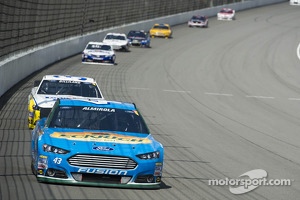 
"Bristol is way different at night than during the day. It is one of those tracks that every driver in this garage area gets excited about going to. There is just something special about Bristol under the lights that make it exciting. With the things we have learned over these last couple months here, I feel like we are going to be good here. I just have a gut feeling we are going to be really good at Bristol. I'm looking forward to going there.

"I'm thrilled to have RainEater Wiper Blades on the car this weekend. It's always cool to introduce a company to NASCAR. RainEater wipers help you in any element, and that really lines up with Bristol. You have to be ready for anything, and it's going to happen quickly. To have RainEater Wiper Blades give a dollar donation to Victory Junction for every wiper sold this season as part of their partnership is truly special. My wife, Janice, and I have been to the camp many times, and what the kids get while they are there is remarkable. I'm glad we can make a difference with this sponsorship. "

"Bristol is a challenging racetrack, on drivers and their equipment. It's important to keep the fenders on the car. In March, we had some damage that caused a flat tire and ruined our day. The biggest thing is to stay out of trouble and be in position at the end of the race. Five hundred laps is a lot at Bristol, and it is very important to keep focused as the turns jump up quickly. We'll work hard to give Aric a good car, so he can focus on keeping the fenders clean and be there at the end.

"Dale (Jarrett) and I won the night race at Bristol in 1997. There is something special about making it to Victory Lane for the Bristol night race. The race has a ton of excitement and is one that teams and fans have circled on their calendar. "

The No. 43 team has prepared chassis No. 850 for this weekend's night race. They last ran the chassis at Martinsville Speedway in April.

Bobby Labonte gets set for race under Bristol lights

Racing at Bristol is always exciting, especially at night