“It was just a never-give-up night”

Mooresville, NC (October 14, 2013) Brad Keselowski, driver of the No. 2 Miller Lite Ford for Penske Racing, captured his first win of the NASCAR Sprint Cup Season on Saturday night at Charlotte Motor Speedway. The only night race in the Chase for the Championship experienced long green flag runs until a caution was called for debris on lap 307. Keselowski’s crew gave him four fresh tires, allowing his Ford Fusion to pass Kasey Kahne for first place with just nine laps to go. 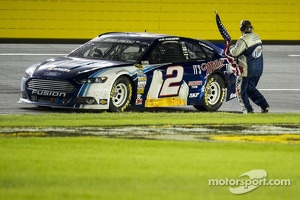 “It was just a never-give-up night,” said the reigning Sprint Cup Champion in Victory Lane. “I knew we had a good car. When Paul Wolfe made the call to take four tires and I saw we were that close to the front, I knew would could get them.”

Keselowski became the first non-Chase driver to win a Chase race since Kahne won at Phoenix in November of 2011. Saturday marked his first win at Charlotte Motor Speedway and the 10th Sprint Cup win of his career.

“It’s been a tough year and I appreciate everyone hanging in there,” said Paul Wolfe, crew chief for the No. 2 Ford Fusion. “Everybody on this team has been working hard. Hopefully, we’ve turned a corner here. Thank you.”

Keselowski’s Bank of America 500 victory is his first in a Roush Yates powered Ford and makes him the 79th different driver to win a NASCAR Sprint Cup Series race with Ford Racing. The win is Ford’s 618th all-time series victory and Penske Racing’s 29th victory. “Every driver in our stable now has won a race this year,” said Roger Penske, car owner. “AJ, Blaney, Sam, Joey, and the two guys on the Indy Car side, so I’d say this is a pretty good night for us. The Ford engine was really running strong tonight. You could really see it down the back straightaway that we had some speed. The car was really handling and we just had to get him up there.” Keselowski and the rest of the Roush Yates powered Ford drivers head to Talladega next weekend with five races left in the 2013 season.

Scott Bloomquist used his Roush Yates power to outduel a talented field of National Dirt Racing League (NDRL) Super Late Models and win the 25th Annual Pittsburgher 100 at Pittsburgh’s Pennsylvania Motor Speedway. Bloomquist passed Billy Moyer on lap 12 and never looked back to dominate the event for the fourth time in his career.

“We’ve been doing a lot of testing this year, and some things have worked and others haven’t,” said Bloomquist. “Tonight it worked. The car would just go wherever I needed it to be, and I felt really comfortable out there.”

Bloomquist ran his fastest lap of the race on the final circuit, finishing just over a second in front of Moyer.

“The hardest point of the race tonight was not knowing what was happening behind me,” noted Bloomquist. “I just had to assume I was in the best spot during those long green flag runs.”

Bloomquist and other notable late model drivers will be making their way to Charlotte for the World of Outlaw World Finals November 7– 9th. Make plans to stop by the Roush Yates trailer to get a firsthand look at Roush Yates’ newest technology.

Vickers to miss remainder of 2013 season

Points-leader Power on GP Indy: “It was a day to be smart”