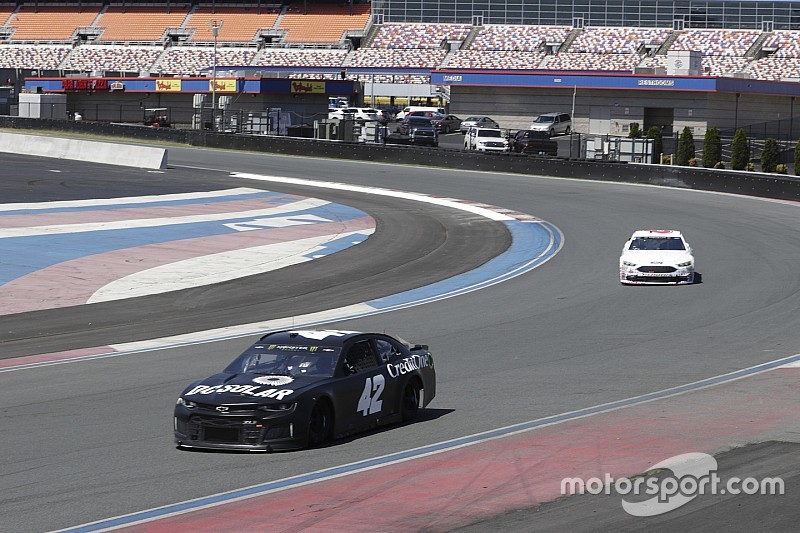 Charlotte Motor Speedway officially unveiled the lengths of its two NASCAR races which will compete on its “roval” course in September.

Motorsport.com first reported last Tuesday that the Monster Energy NASCAR Cup Series race will be 400 kilometers in length. CMS confirmed that in an announcement Monday at Bank of America in Charlotte, N.C., which is sponsoring the event.

“This is history in the making, and it marks the next chapter in our legacy of providing innovative, show-stopping entertainment that’s never been seen before,” said Marcus Smith, the president and CEO of Speedway Motorsports, Inc.

“Like NASCAR’s first 600-mile race and the first superspeedway race at night, the inaugural Bank of America Roval 400 is going to be a ‘can’t-miss’ event that fans will remember forever. We’re about to witness a dramatic, historic, unforgettable race weekend Sept. 28-30.”

Qualifying for both events will take place on Friday afternoon, Sept. 28.

“Following a number of test sessions in preparation for the much-anticipated playoff race at Charlotte, we felt that this race length made the most sense,” said Steve O’Donnell, NASCAR executive vice president and chief racing development officer.

“In the end, we believe the race length will accomplish the primary goal which is to showcase the best race for our passionate fans.”

Tuesday will be the first of two tests for Cup series teams on Roval. Sixteen teams are slated to take part Tuesday. The second test will take place one week later.

Testing will run from 9 a.m. to 5 p.m. ET both days with a one-hour lunch break at noon each day. The tests are free for race fans to attend. The track will also host a “Test Fest” both days, featuring food and drinks, live music, games and mechanical bull rides.

In addition, fans who have purchased Bank of America Roval 400 tickets will have the opportunity to drive their personal cars three laps around the innovative course from 4 p.m.-8 p.m. ET on Saturday, July 14.

Truex on Daytona wrecks: "A lot of guys just wing it, go for broke”