David Gilliland's opinion of Pocono Raceway has changed over the years. So has his approach to racing there. The driver of the No. 34 Taco Bell Ford previously didn't care for the 2.5-mile tri-oval in Long Pond, Pa., but now says he enjoys the venue, where he'll race in Sunday's 5-Hour ENERGY 500. He has also changed his focus on how to attack the low-banked track known as the "Tricky Triangle," concentrating on mastering Turn 3, which is the flattest of the three corners.

Gilliland has been fast in the past at Pocono, qualifying third for the Sprint Cup Series race in 2008. In his eight starts at the tri-oval, his best finish is 16th. 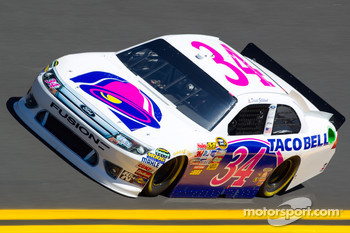 "I like Pocono now. I admit I didn't always feel that way. It's different, it's got three unique corners that all react differently with the racecar. The first couple times I went there, I attacked it like any other racetrack I went to. I started working on the car and getting it to turn in the first corner you come to, which is Turn 1. And I came to learn that that's the complete opposite of what you want to do in Pocono.

"We've learned a lot there. I think my best qualifying spot there was in the top-five. So, we've had good speed there, we just have to get our car working well in Turn 3, and that's going to be our primary focus. I feel like we've learned some things earlier in the year that we'll be able to take to Pocono.

"It's been a learning experience for our team with these new cars that we have. It's almost like we had to start over after everything we learned last year because we got a whole new fleet of cars for this year that are so different. But we've taken some really good strides lately and hopefully we'll be able to take some of that knowledge and apply it at Pocono.

"Last week at Kansas, we were terrible off the truck. But Peter (Sospenzo) and the guys made some good changes to the car and had our Taco Bell Ford Fusion running pretty well during the race. Obviously we would prefer to bring a good car to the track to begin with and get a better qualifying run out of it, but the fact that we can adapt and come up with something decent while we're there is still good progress. Sometimes you really don't have a track figured out with a particular car until you're there and running around it for a couple days.

"Pocono isn't just a cool track, but the whole area around the Poconos is a neat place. It's really quiet and peaceful. It kind of makes you slow down and relax and enjoy the surroundings, so it's always a cool place to visit."