Photographer Jay Alley talks about his trip to Talladega Superspeedway.

By:
Jay Alley
Listen to this article

My Talladega road trip last weekend to shoot ARCA and NASCAR for Associated Press went off without a hitch and now I am gearing up for Indycars at the Indianapolis Motor Speedway (IMS) the rest of this month.

Track action for the first ever road course race at IMS kicks off tomorrow and then the Verizon Indycar competitors begin Indy 500 practice on the big oval this Sunday, one day after the Grand Prix of Indianapolis is run. It's a quick turnaround for everyone and the big question will continue to be: will they get 33 cars for the traditional 11 rows of three for the 500? We shall see, and I will be shooting for motorsport.com and blogging throughout the month to share my impressions. You know I will have an opinion or ten to share! 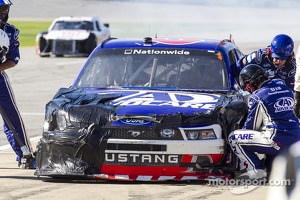 I had an excellent weekend at Dega, not quite as good as last October's NASCAR weekend, but I did get five pictures out on the AP wire from Saturday and Sunday's races. I didn't photograph any flipping race cars like last fall, but I did get to shoot some celebrities, some crashes and cars on fire, which is a pretty good setup for a freelance stringer like me. I really enjoyed the variety of shooting locations from which I worked this weekend, and the confidence my AP bosses have shown in me when I go to Dega.

Even if I don't sell any pictures, I am still highly motivated to do a great job for them every time I go down there. Saturday morning for the ARCA race, I was on top of the highest grandstand in the tri-oval. Then I got moved to the Turn 4 photo tower in the afternoon for the Nationwide race. I didn't have a hot pass so I didn't worry about shooting in the garage or pits, and then Sunday I got positioned at pit exit on the inside with a perfect view of the start-finish line and the flag stand. My job was to get the checkered flag shot Sunday and stay ready for anything else which might happen. I was hoping for a photo finish but the shot (above) that I got of Denny Hamlin taking the checkered and yellow flags was on the money so I was a happy camper.

One of the biggest thrills shooting for AP is to Google my name afterwards to see where my photos have been used. Their worldwide distribution is among the best in mass media and the first link I saw of my Denny Hamlin shot was from the Denver Post! Another great aspect about shooting for AP in other parts of the country is the chance to meet and work with people I wouldn't ordinarily encounter.

My experience has been that southern hospitality is a real thing, and when I got to the track Saturday morning, one of the first familiar voices I heard was a woman hollering "Hey babycakes!" and I knew it was an AP connection. Last fall at Dega, I had told the wife of an AP shooter about the nicknames my lady friend has given me (including The Energizer Bunny, Mr. Photographer and Babycakes) so it was cool that she remembered and greeted me that way. She was there to shoot and help out as our photo runner and her husband and I kept her busy on Saturday with repeated trips to our location in Turn 4 during the Nationwide race. The above shot of Kasey Kahne was from Saturday's race and for a photo stringer, the more spectacular the incident the better. 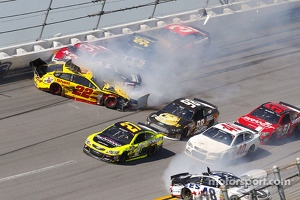 A two day race weekend can be exhausting but it's always worth it. Sometimes there's luck involved with photos that get put on the wire and sometimes it's just a matter of being in the right place at the right time and being ready. That happened Saturday morning as I went into the ARCA garage area to say hello to my ARCA series friends and was told that actress Pamela Anderson was there with ARCA driver Leilani Munter. Naturally I had to go make some pictures.

I forgot all about the shots until later that day when the AP folks were looking at my CF cards. As a result, they found two of Anderson that got transmitted. I assure you celebrity photos were the last thing I expected to get used this past weekend. Does it get any better that that? I keep asking myself the same question and the universe keeps on answering with a resounding "The best is yet to come" the more I shoot and network.

So tomorrow the Indianapolis Motor Speedway opens for the first Grand Prix of Indianapolis, I have the hot pass I need to shoot in the pits during the race and will be extremely busy covering the event from all angles for motorsport.com. Working for them is a whole different ballgame compared to AP as I have freedom to roam the track, shoot people, cars in action and "event" setting shots for uploading. My next three weekends are set for Indycar racing, my first motorsports love, and I get to do it at the most famous racetrack in the world. For now I will leave you with slideshows from all three races at Talladega this past weekend.

Your best bet is to find me on Twitter @alleygroup if you want to track me down. See you at Indy!

Kurt Busch getting ready for 'The Double'

A reflection on a year of NASCAR

Kimi Raikkonen says he feels better prepared for his NASCAR Cup Series debut with Trackhouse Racing at Watkins Glen next weekend following his maiden Next Gen test run on Thursday.

Bubba Wallace has signed a multi-year contract extension with 23XI Racing, and will remain the driver of its No. 23 Toyota Camry.