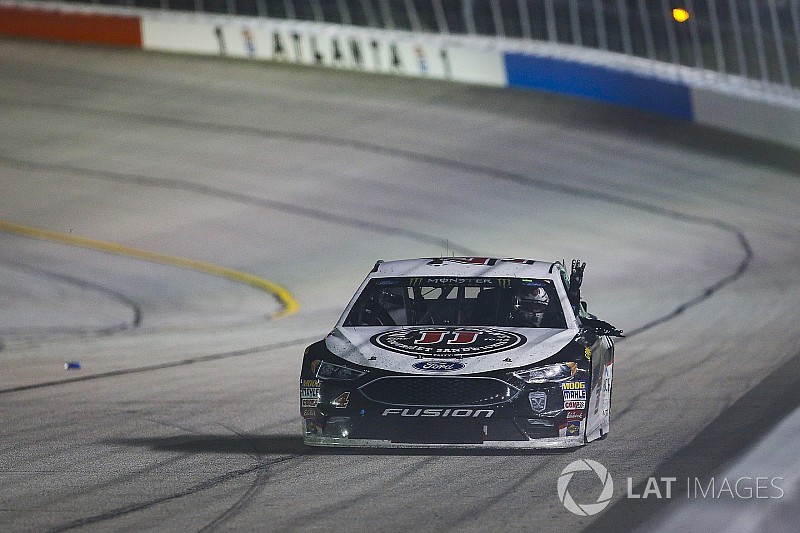 A lot has changed in NASCAR in the 17 years since Kevin Harvick won his first career Cup race in 2001 at Atlanta Motor Speedway.

The sport’s leadership has changed. There have been more generations of cars than manufacturers themselves. And what the fanbase truly cares the most about—the drivers—have all moved on to the next chapters of their lives, with the notable exceptions of Harvick and his Stewart-Haas Racing teammate and fellow champion Kurt Busch.

After the Richard Childress Racing torch was thrust into Harvick’s hands following the death of Dale Earnhardt, he did his best to accept that mantle. At 25, it wasn’t the easiest of tasks. But in his third Cup start, Harvick raced to the win in the newly numbered No. 29 Chevy in one of the most cathartic wins the sport has ever experienced.

On Sunday night at Atlanta, 609 races later, Harvick told his crew after the win, “It took 17-years to do what I’m about to do."

How it's meant to be

Harvick executed a masterful burnout. He then turned the No. 4 Jimmy John’s Ford around on the frontstretch, dropped his window net and proudly raised his hand in the air and displayed three fingers for the fans—just as he had after his very first Cup win.

“I think for me to be able to kind of do that celebration again, very similar to what we did in 2001, I've been waiting a long time, because 2001 was very confusing. It was my first win, and I don't feel like I remember really anything about it because it was just such a really confusing time in my life, and just on the racetrack and with Dale gone and getting in his car, not with my team that I had built over the last couple years at RCR, and I raced so much in 2001 that you didn't really see the repercussions of everything that had happened until 2002, and we were terrible in 2002.”

Harvick endured a sometimes-dysfunctional relationship with Richard Childress Racing. As the company grieved, there was no one to help the young driver navigate the demands of instant fame and fortune. While the driver never lacked for confidence externally, he quickly learned to be guarded with his actions.

“So there was just a lot of confusing things. So it felt good to pay tribute to that and park it in Victory Lane with a smile on my face and watch everybody smile with me.”

The RCR equipment was so competitive when he took over the ride that Harvick was able to finish ninth in the standings as a rookie despite missing the first race of the year. When performance waned, Harvick carried the team on his shoulders. He remained loyal to Childress for 13 seasons, likely sacrificing his own success in the process. That was never more apparent than when Harvick and crew chief Rodney Childers won their first championship together in 2014—his first season with Stewart-Haas Racing.

But after posting solid performances with the No. 4 SHR team at Atlanta in his last four attempts, Harvick was finally able to close the deal on Sunday.

“Today was very satisfying just for the fact that we were able to overcome so much,” Harvick said. “That in my mind is very rewarding for everybody on the team, to make a comeback of some mistakes and make the car better and then make a great pit call to get our track position back. Just a number of things happened with the last pit stop. Those guys nailed it, and the last restart. So those are the things that kind of put all those question marks out of your head, and you say, all right, that worked out pretty well.

A message to his younger self

So what would the 42-year-old Kevin Harvick tell the younger version of himself who won this race 17 years ago?

“Oh, sometimes you just need to keep your mouth shut,” Harvick said. “And everything is not a show. Running fast is enough merit and enough show. Man, I said and did a lot of dumb things. I guess you could call them building blocks and now we can laugh about them, but it was entertaining at the time.

“Got me a couple of vacations. Richard chewed me out a lot. Mike Helton—we need more of Mike Helton in today's NASCAR, just because he was the guy that could just look at you and you knew you were like—you were in big trouble when he would just give you that look and you'd sit there in awkward silence…

“He'd look at you and just not even say anything and just stare at you, and next thing just go, ‘Well, this isn't good.’ And it would just be the most thought‑out, well‑said thing that you've ever imagined, and you'd leave there like, ‘Oh, my God, I may never race again.’”

But the 2001 version of Kevin Harvick would certainly be proud of the man that he’s become.

NASCAR Mailbag: Send in your questions now to Motorsport.com