Keselowski has necessary speed to content for win at Michigan

This Week’s Charger… The No. 2 Miller Lite Dodge Charger team will race chassis PRS-826 during Sunday’s Pure Michigan 400 at Michigan International Speedway (MIS). Brad Keselowski last raced this chassis to a fifth-place finish at Charlotte Motor Speedway in May. It has been updated to the current Penske Racing specification. 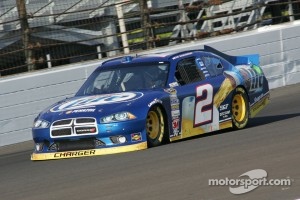 No. 2 Miller Lite Dodge Charger in 2012… After 22 points-paying events, Keselowski and the No. 2 Miller Lite Dodge Charger team are ranked fifth in the 2012 NASCAR Sprint Cup Series (NSCS) driver and owner point standings. Winners of three races already this season, the team is coming off a second-place finish in the Finger Lakes 355 at the Glen at Watkins Glen International last Sunday. Keselowski finished 13th in the June Cup Series race at MIS.

Peaking Again?... Since picking up his third win of the season at Kentucky Speedway in June, Keselowski has yet to finish outside the top 10, proving that the team’s hot streak during the 2011 season was no fluke and that the summer months are when he and the Miller Lite team turn up the heat.

Statistically Speaking… The Miller Lite Dodge has displayed impressive speed throughout the 2012 season, supported by the fact that Keselowski ranks at or near the top of the Cup Series in several key categories, including: Quality Passes (first), Fastest Speed in Traffic (fifth), Laps Led (sixth), Laps In The Top 15 (sixth) and Fastest Driver on Restarts (sixth).

Home Sweet Home… The featured tag line on the bumper of the “Blue Deuce” this weekend at Michigan will be “Home Sweet Home.” This is a nod to Keselowski’s ties to the state of Michigan. His family is from Rochester Hills, Mich., and his father, Bob, and uncle, Ron, both competed at MIS in NASCAR and ARCA competition.

Back to Where It All Started… Auto City Speedway in Clio, Mich., is where Keselowski first raced a full-bodied stock car. He will make an appearance at his old stomping ground on Thursday, August 16 at 6:00 pm, on behalf of MillerCoors. Keselowski will sign autographs, address the crowd, spend time with the competitors and wave the green flag to start the “Brad 100” CRA/Jegs All-Stars Tour race.

The Rest is History… Penske Racing has enjoyed considerable success at MIS, a track that used to be owned by Roger Penske. In 92 combined Cup Series starts at the venue, Penske Racing drivers have recorded six wins, three pole awards and 24 top-five finishes. The organization made its first start at the track in August of 1972 with Dave Marcis behind the wheel of the No. 2 entry.

Brad Keselowski on racing a new tire in this weekend’s race at Michigan International Speedway
“While you never like to change tires from race to race at any racetrack, I think this tire will prove to be a good call for the Miller Lite Dodge. It’s similar to the tire we raced on in June and our car was fast during the race. Our car just didn’t like the first tire and we weren’t great off the truck. But the guys on the team worked their tails off and we actually began to make progress, even before the tire change. I definitely think we were better than a 13th-place car. I’m confident that we will have the necessary speed to contend for the win this weekend. A Cup Series win at Michigan would be a big deal for me and my family.”

Crew chief Paul Wolfe on preparing a car for Michigan International Speedway
“It’s almost like this is the first race on the new Michigan surface instead of the second. We’re coming back with a different tire than what we raced on in June, which makes our notes obsolete. We did get a chance to test it a few weeks ago and it’s definitely more durable. We won’t have any concerns about it blistering. The key to the weekend is still going to be track position, though. Temps are looking like they will be cooler, meaning the speeds will be up. Increased speeds mean that the cars will become more aero-dependant with no tire falloff, which puts track position at a premium. We’ve worked hard over the last few weeks and we’ve begun to develop a lot of consistency. Another consistent run this weekend should put us there at the end of the race to battle for the win.”

Clint Bowyer heads to Michigan with points picture in mind

Dodge with Keselowski and Hornish seeks sixth win at Michigan