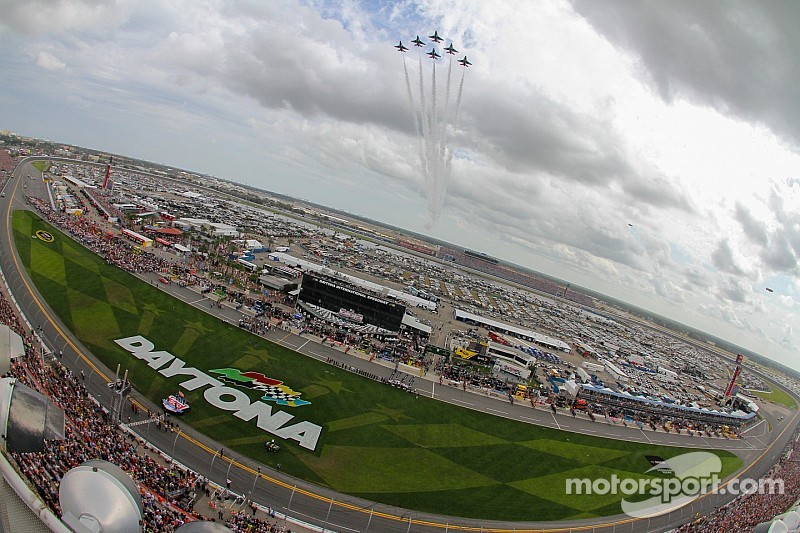 INDIANAPOLIS – With the 2015 NASCAR Sprint Cup schedule expected sometime in the next month or so, the debate continues as to whether there are too many events on the calendar.

And if there aren’t too many races, what can be done to spice up the current schedule?

Certainly, the novelty – and excitement - of the truck race at Eldora Speedway has a tendency for pundits to question what more can be done to revive a tired roster of tracks – particularly since the Cup tour has become so predictable?

NASCAR was on a cost containment kick a few years ago. But after signing a new 10-year TV contract with FOX and NBC, there hasn’t been much further discussion.

For the sake of the teams and the sponsors’ bottom lines, perhaps Daytona could take a page from the IndyCar book and double up on races. Is there really any reason to go to Pocono twice? Michigan? Dover? Is there any reason why two weeks of racing at Charlotte in May could not be consolidated into one?

A few adjustments and NASCAR could easily cut a month from a schedule that starts with testing in January and lingers way too long into December with the Champion’s banquet in Las Vegas.

Ryan Newman feels if the inspection process at restrictor plate tracks were streamlined, teams could save a travel day. He's also a proponent for realignment and mid-week races.

"Giving us the opportunity to be on TV and be our own special event on Wednesday night, especially in football season, would be good for our sport," Newman said.

While Kevin Harvick isn’t ready to advocate for Cup cars to race at Eldora as his boss Tony Stewart proposed following another successful MudSummer Classic, he would also be in favor of mid-week racing to condense the calendar.

“I think Nationwide and truck are definitely doable but I don’t know if I see the race track paying how many millions of dollars it is as a sanctioning fee then making it up with 20,000 people in the grandstands.”

Two weeks ago at New Hampshire, six-time Sprint Cup champ Jimmie Johnson discussed the possibility of “a 25-race schedule or something with more weekends off”. Johnson felt that six or seven free weekends “would be awesome”.

“Ultimately, you know, I buy into the philosophy that we have a bit of oversaturation with race distances and how often we compete,” Johnson said. “I think we could trim that stuff down. I don't know where I would go to first, but I think adopting a little bit of less is more would be beneficial.”

Ultimately, you know, I buy into the philosophy that we have a bit of oversaturation with race distances and how often we compete...I think adopting a little bit of less is more would be beneficial

Harvick disagrees with Johnson about shrinking the number of races on the schedule. However, the driver of the No. 4 Chevy feels that a few mid-week races to shorten the amount of time spent by teams on the road would allow the crews time to get “rejuvenated”.

“The guys are going to work,” Harvick said. “It doesn’t matter about me. I’m going to get home and spend way less time away from my family than my crew guys and team guys are just from the fact that my travel arrangements are much better. When they come home Sunday night or get home at one in the morning on Monday, they’re at the shop at 7:00.

“They’re going to be at the shop anyway. If we race four or five races and shorten the season up by a month – that month at home that they would have with their families by just having normal hours on the job - would mean more to the race teams and the people on the race teams then just shortening the schedule and by leaving it like it is and have the same amount of races and just race mid-week.”

And when it comes to putting a spark back in the Chase for the Sprint Cup, former champion Kurt Busch had a few suggestions - first, the final qualifier.

“Maybe we should take Talladega out of The Chase, put Richmond in The Chase and use Talladega as the cutoff to get into The Chase?  Why not?  Because we're all driving around, they're very tentative and trying not to get in a wreck at Talladega,” Busch said. “But why not make it the final race to get in and throw a huge wild card in to try to make it into The Chase.

Maybe we should take Talladega out of The Chase, put Richmond in The Chase and use Talladega as the cutoff to get into The Chase?

“By then you have 15 guys that are pretty much locked in. That means those top 15 guys are going to throw it on the line to try to win. They're not going to be riding in the back to protect their points. To change the schedule, I would change Richmond and Talladega, and it works because NASCAR owns both those tracks.”

Johnson believes the teams “could use an off weekend before The Chase starts”. The break would allow teams to regroup as well as give NASCAR a little leeway for a make-up in case an event is rained out earlier in the season.

“I know it's a pretty severe event if it would take place,” Johnson said. “And the last unfortunate situation that was created was 9/11, but I think that was good to give the teams a break and give everybody a break that deep in the season before the Chase starts.”

Currently, the last off weekend falls before Indianapolis, around the third Sunday in July. That’s followed by a seven week slam leading into the Chase and Chicagoland. No, Joliet is technically not Second City any more than Fontana is L.A. But both racetracks are just a short drive of two of the largest markets in the country. Either locale provides NASCAR with sufficient exposure to kick-off the final 10 races to determine a champion.

“Chicago is a great place to start it off,” Busch adds. “Those Chase races are valuable. And could we mix it up and change some of the races that are in The Chase and not in The Chase?

“There's so many opportunities...I think the final race should be bid on like a committee such as the Super Bowl. There's a committee that goes around and it gets filled in with who does the best job with their community to present themselves as the frontrunner to have the Super Bowl. Why not do that with our final stock car race?”

Sure, NASCAR moves dates on occasion. The Easter holiday has a tendency to shift the lineup as do track repaving and the rare request from an event promoter.

If the Chase was indeed developed to compete against the meat of the NFL schedule, shouldn’t NASCAR offer its best venues during those 10 races? There’s no doubt that road courses provide some of the most scintillating action for stock cars but there is not a single one in the Chase. That’s a void that NASCAR could fill with any number of circuits – Austin, Montreal , Road America.

Yes, Tony Stewart would love to see a Sprint Cup race at the Big E – and surely many fans and former dirt racers might agree - Johnson among them if only to relive his stadium truck days.

“There’s a couple of mile tracks that have the type of history that would make sense to go to,” Johnson said. “But from a short track standpoint, Eldora, that place is known nationwide regardless if you’re an asphalt or dirt guy.

“So I think it would be cool. With my background, there’s no complaints. I’m just going to start lobbying for a few jumps. If we start racing on dirt, then we need to add a couple of jumps to make things exciting.”

Kenseth encouraged after Sprint Cup practice for the Brickyard 400