Martin Truex Jr. hopes to make it a Michael Waltrip Racing sweep this weekend at NHMS

“We’ve overcome a lot during our season and it was quite an accomplishment to compete for a Chase spot." 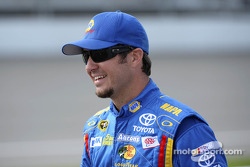 A Truex has crossed the finish line first five times at NHMS in NASCAR competition. Martin won the 2000 and 2003 K&N Pro Series East races and the 2005 Nationwide Series race. Martin Sr. won the 1994 East race and younger brother Ryan repeated that feat in 2010.

Martin Truex Jr. On Last Nine Races: “We’ve overcome a lot during our season and it was quite an accomplishment to compete for a Chase spot. Now that we are not in it, it doesn’t mean our season is over. We’ve just switched gears and simply changed how we are approaching these last nine races. We are no longer points racing. From here on out, we are going to get prepared for next year. We are going to try and figure out the tracks that we’ve struggled with this year which includes this weekend’s race at New Hampshire. Ultimately we are going to go out and try to win races. We can gamble more because points from here on out really don’t matter much. We are going to take more chances. We can gamble more on fuel mileage and things like that. I think we can also expect this No. 56 to do some experimenting and do some testing out on the track to prepare for next year. It’s important for us now to use this time to figure some things out that maybe we have put off because we were worried about points and racing conservatively. One thing is for sure, it’s all about continuing to do our best. We always have and always will. Hopefully we can end the season strong and have some things to be excited about heading into 2014.”

New Hampshire: “This weekend we’ve got New Hampshire and then Dover. Both tracks I consider to be home tracks. These next two weeks are going to be big for us. For some reason, New Hampshire has been tough on the NAPA team. We definitely need to figure some things out. It certainly hasn’t been because of a lack of effort. Chad has tried everything he can think of so we are going to take a bit of a different approach to it this weekend. It sure would be nice for it all to work out and pay off with a win. It would be a huge shot in the arm for the entire Michael Waltrip Racing organization. I know it would mean a lot for my 56 team.”