After Talladega, Smith Wouldn't Mind a Few Treats in Martinsville 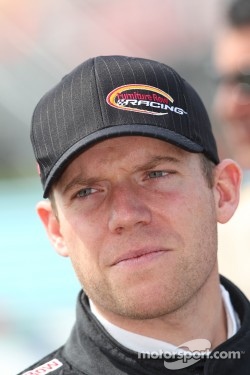 DENVER, Colo. (Oct. 26, 2011) -- Regan Smith has seen enough tricks in recent races, especially the pirouette his car took before slamming into the wall last week at Talladega (Ala.) Superspeedway. Though he escaped injuries -- except for soreness -- the Furniture Row Racing driver is looking to be on the receiving end of some treats on Halloween Eve.

"I am still a little disappointed about what happened in Talladega," stated Smith. "The Furniture Row Chevy was strong all day and to be taken out with eight laps remaining hurts as did the impact into the wall. That was a pretty good lick I took and I want to personally commend NASCAR for our safety equipment and the safety innovations made throughout the years."

Smith and his No. 78 Chevrolet will be at the half-mile Martinsville (Va.) Speedway Sunday (Oct. 30) for the running of the Tums Fast Relief 500 Sprint Cup race, the sixth and final short-track event of the season.

Smith's finishes in the first five short-track races included three top-20s and a 22nd. His worst finish of 31st, which came at the Martinsville spring race, should have been his best.

"I still think about the last Martinsville race," said Smith. "We were in perfect position to finish in the top-10 or better until the right-front brake rotor broke."

At the time of the breakage, Smith was running in 14th place with 35 laps remaining and did not need to pit for the remainder of the race. He would have gained a number of spots in track position once the cars ahead of him came down pit road for the final stop.

"That one hurt because we had it planned perfectly with our pit stop strategy," noted Smith. "We've accomplished a number of firsts this season, but we haven't nailed down a top-10 at a short track. I hope we can find ourselves in a similar position come Sunday, but not have any malfunctions, which would be the treat we're looking for."

Within a week's time, Smith and the 43-car field will come from competing on NASCAR's biggest track -- Talladega's high-banked 2.66-mile oval -- to its smallest track, the .526-mile flat oval of Martinsville Speedway.

"If you like variety we have it here in NASCAR," said Smith. "I enjoy the different-style of tracks, but the main workload is with the guys at the shop who make sure we have all the cars ready to go for the different venues. We have four races remaining. That top-10 short-track finish would really add to an already exciting season for our Furniture Row Racing team."