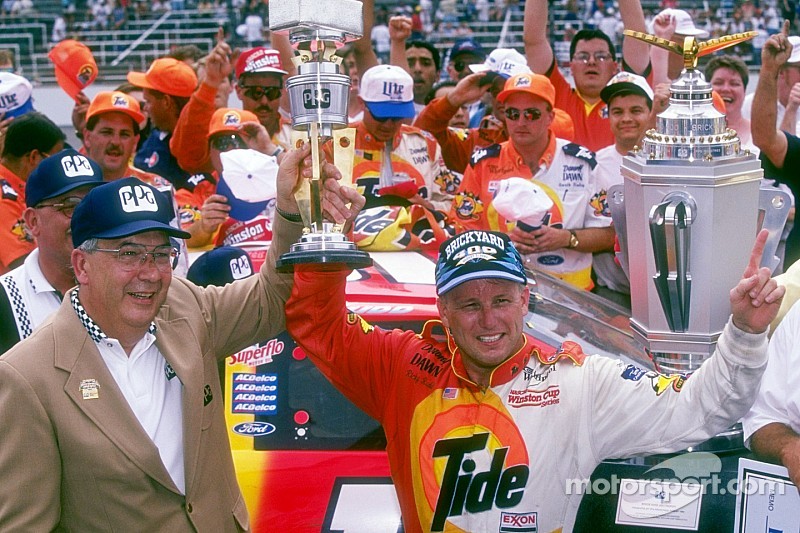 For Ricky Rudd, win at Indianapolis Motor Speedway stands above the rest.

Rudd, 57, grew up in an era when many aspiring race car drivers started in go-karts and dreamed of running in IndyCar one day.

You almost felt like you were just a guest, sort of under the microscope to make sure that we were worthy of being there.

Although the Chesapeake,Va.-native enjoyed an illustrious NASCAR career with 23 Cup wins, his hope of one day racing in the Indianapolis 500 was never realized.

But winning the Brickyard 400 was the next best thing.

The biggest win of his career

“For me it's definitely the biggest win of my career,” Rudd said. “I was never fortunate enough to be able to win at Daytona. I'd probably put them in that order, Daytona out front. Right in there would be Indy. If I wasn't able to win Daytona, at least I got Indy.

“It meant a lot to me. Just my original kind of the way I got started in go‑karting, I was originally looking to go IndyCar racing. It didn't work out at the time. Then to be able to have the fortune to be able to win there, that was a big day, a big day that I'll remember for probably the rest of my life.”

Affectionately known as “Rooster”, Rudd retired in 2007 after more than three decades on what is now known as the Sprint Cup tour.

But Rudd still remembers that first trip to 16th and Georgetown and the initial anxiety he felt coming to the Goodyear tire test at Indianapolis Motor Speedway several years before the NASCAR made its official debut in 1994.

Being at the motorsports mecca

Despite racing at tracks such as Daytona International Speedway and Talladega Superspeedway, which is actually larger than the 2.5-mile Indy oval, Rudd was blown away by the enormity of the motorsports mecca.

"You had the feeling it was something special the first time you were in there,” Rudd said. “It was kind of weird. You could feel it in the air the first time we showed up.  It didn't feel like going to a normal Cup race like Daytona. It felt special because I think all of us sort of felt like we were invited guests. It wasn't our place."

“We felt very comfortable being there, but we also had the feeling, at least I did, guys I talked to, you almost felt like you were just a guest, sort of under the microscope to make sure that we were worthy of being there.”

Rudd, like many of the NASCAR regulars, felt the unmistakable reverence accompanied with visiting Indy for the first time. Although he had tested with most of the top performers of his day several times prior to the inaugural Brickyard 400, Rudd and others were concerned.

“The cars we were going to race that day, they would race close enough, put on a good enough show,” Rudd said. “The ultimate measuring stick was the Indy 500. I think once everybody got over the fact you had the Indy 500, one set of rules, a different set of cars, not trying to compete one‑on‑one with the Indy 500, which we didn't do that. We just went in there and it was our stock car race, it wasn't the Indy 500, yet it was a big event to be there.

The pressure was considerable

The pressure started on Friday as 86 teams attempted to qualify for the 43 car field. Four-time Indy 500 winner and Daytona 500 winner A.J. Foyt came out of retirement to attempt to make the race – and did. Danny Sullivan, the 1985 Indy 500, also made the field.

Rudd, who was driving the No. 10 Ford for his own team at the time, qualified eighth.

“It had a lot of people concerned about making the race, people that would normally make the race,” Rudd said. “Obviously, at that time the provisional spots were laid out a little bit differently. There were quite a few Indy teams that put stock cars there for the first time. Never been in stock car races but fielded a car for the first Brickyard 400.

“It was a little intimidating knowing how much pressure was on qualifying. Definitely it wasn't just about a starting place. It was about making the race. A lot of guys were concerned.”

Three races later, Rudd would earn his coveted win. While Dale Jarrett, Jeff Gordon and Ernie Irvan had the dominant cars that day, Rudd had superior fuel mileage on the final 46-lap run while the top competitors were forced to pit.

“I remember how it finished,” Rudd said. “I remember the last 10 laps of that race, last 10 or 15 laps after the restart. I can almost run them in my head how that thing wound down, then coming down pit road. What's unusual about Indy is you come down pit road, you have fans on the inside, fans on the outside, then you have all the crew members coming out to greet you.

“It was just such a big day. I still have visions of that. I was fortunate enough to win a few more races along the way, but none of them seem to stand out in the detail that Indy has. It's almost like it was a dream but yet it came true. I just have very vivid recollections of how that thing unwound.”

One of only a dozen to win the Brickyard

While Rudd’s overall Indy record was not stellar, he had just one top five and three top 10 finishes, he’s one of the only 12 racers to hold the distinction as a winner of the Brickyard 400. Despite victories on 14 different NASCAR tracks, his Indy win is one Rudd will never forget.

After the race, everything was sort of winding down. To me, my wife Linda, they ride you around in that convertible. The crowd was still in the stands. It was a little bit after Victory Lane. It was just cool to top off the day to be able to make that final lap and ride around in that pace car sitting up on the back waving to the fans. A special way the race was ended, the victory in Victory Lane.”

Kahne hopes to get Sprint Cup season back on track