Shaking down the backups before The Duels 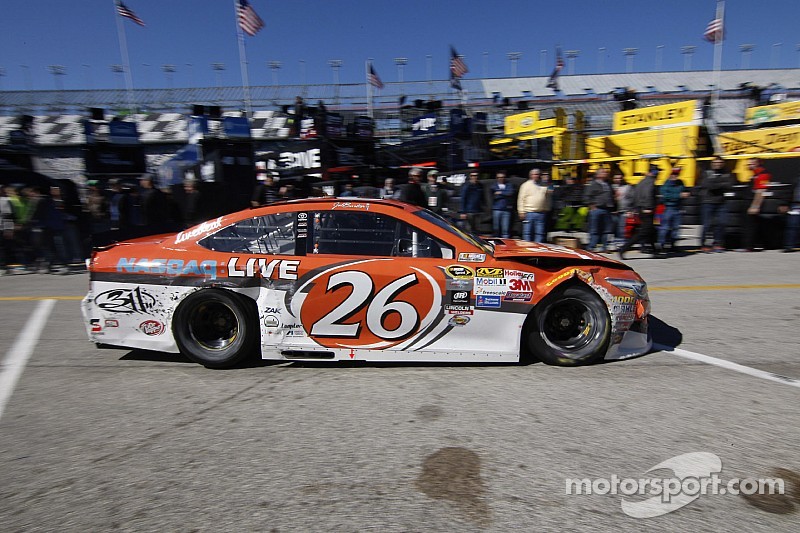 BK Racing scrambles to practice before the qualifiers.

DAYTONA BEACH, Fla. – As Daytona 500 practice was under way, the No. 26 BK Racing team prepared to push its Toyota into the room of doom – or final inspection with its backup car.

Rookie Jeb Burton was swept up in the Danica Patrick/Denny Hamlin melee during first practice on Wednesday. Over the last 24 hours, the second-generation racer helped his team set up the car in hopes of shaking it down in practice prior to his qualifying race on Thursday night. The team had to wrap the car and replace the engine before Burton could practice.

“It’ll be alright,” Burton said optimistically. “Just hoping to get back on the track.”

Burton made it on track with eight minutes to spare. Kyle Larson posted the fastest lap (192.699mph) of the five cars on the track. He completed 18 laps.

At first, the car felt “darty” to Burton The team made a quick adjustment and allowed Burton to make a trial run down pit road.

“Appreciate y’all’s hard work,” Burton said over the radio. “Sorry for my (mess) up yesterday. We’ll get ‘em tonight.”

Burton will start at the back of the field in the second Duel.

BKR was down two cars since Sunday. J.J. Yeley was collected in a wreck involving Clint Bowyer and Reed Sorenson with less than two minutes remaining in the first round of time trials on Sunday. Entering Daytona, BKR had just two backup cars in its stable. Before the Duels, the organization had nothing in reserve.

Yeley was just happy to practice the backup car.

“This car is actually a little faster than the one we had,” Yeley said. “I appreciate the guys working so hard. Being new to BK Racing…we just want to do the best that we possibly can.”

At the other end of the garage, team manager Doug Richert, crew chief for the No. 83 Dustless Blasting Toyota, contemplated strategies for his driver Johnny Sauter, who was 13th fastest in qualifying. His challenge?

“I don’t know how hard we should push it in the race,” Richert said. “Right now it’s about making the show.”

Not surprisingly, Sauter's car remained safely on the sidelines throughout the last three practices leading into the Duels.

RAB Racing's Daytona 500 dream: Justin Marks prepares for 'the race of his life' in Duels