SHR: Teamwork pays off at Daytona 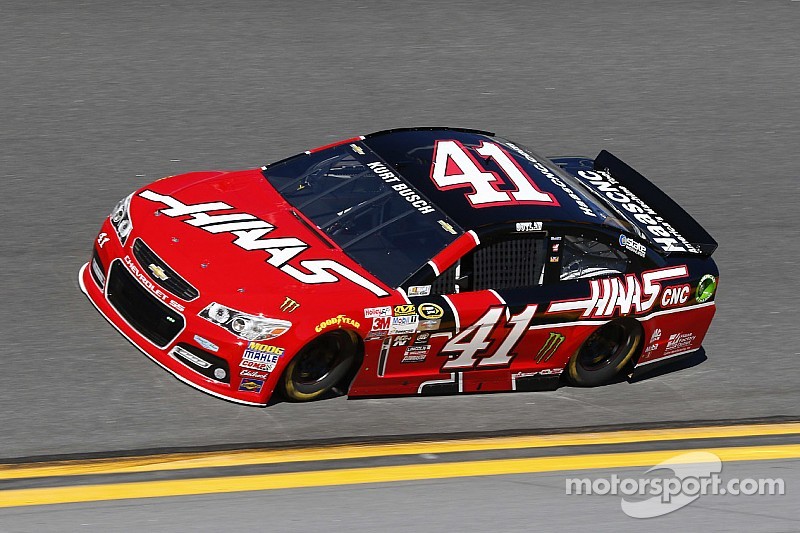 Kurt Busch, driver of the No. 41 Haas Automation Chevrolet SS for Stewart-Haas Racing (SHR), was in position to contend for the win in the second Budweiser Duel Thursday night at Daytona (Fla.) International Speedway until a pair of late-race incidents would change his priorities over the closing laps.

While running second, Busch was issued a late-race penalty for dropping below the double-yellow line to make a pass, which required him to make a pass-through down pit road. A handful of laps after he served his penalty, a multicar incident occurred that collected his SHR teammate Danica Patrick, who needed to race her way into Sunday’s 57th Daytona 500.

At that point, Busch’s focus changed from winning his second career Budweiser Duel to ensuring that Patrick’s No. 10 Chevrolet would be on the grid Sunday afternoon. When crew chief Tony Gibson called Busch to pit road to take on four fresh tires, the Las Vegas native kept an eye on the scoring pylon, in tune with the perilous position in which his teammate found herself.

We don’t have a single scratch or scrape on our racecar; we’ll protect it in the next few practices. We’ll put a new engine in it for the Daytona 500.

When green-flag racing resumed, Busch positioned himself to provide Patrick with the drafting help she needed to overcome the setback dealt when her racecar was damaged in the incident. The teammates were able to advance quickly, with Patrick vaulting to finish 10th and Busch 12th.

“What a great Haas Automation Chevrolet we have,” Busch said. “It’s been prepared to the specs of Tony Gibson and all the guys on this No. 41 team. They know how to restrictor-plate race. I’m very proud of the effort they’ve put forth. We don’t have a single scratch or scrape on our racecar; we’ll protect it in the next few practices. We’ll put a new engine in it for the Daytona 500.

“When we found ourselves out of contention to win the race, our focus changed to ensuring that Danica Patrick would be able to overcome what happened to her in the closing laps,” Busch said. “I was happy to be in a position to help our teammate make the Daytona 500.”

Tony Stewart led the way for SHR Thursday night by finishing fourth in his Budweiser Duel race, the first of twin qualifying races that set the 43-car field for the season-opening Daytona 500. Stewart’s fourth-place result slots him and his No. 14 Bass Pro Shops/Mobil 1 Chevrolet SS seventh for the 57th Daytona 500 on Sunday.

Kevin Harvick, driver of the No. 4 Budweiser Chevrolet SS for SHR, joined Stewart in the first Budweiser Duel race. Harvick finished sixth and will start 11th in the Daytona 500.

Patrick, who had to race her way into the Daytona 500 with a backup racecar, rebounded from a late-race incident that caused left-rear damage to her GoDaddy Chevrolet. Patrick restarted 18th with just three laps remaining, but with drafting help from teammate Busch, Patrick rallied to a 10th-place finish and a Daytona 500 starting spot.

With the Budweiser Duel now complete, the field for the Daytona 500 is set. On the pole is Jeff Gordon, and alongside him is Jimmie Johnson. By notching the two quickest times during qualifying on Sunday, both drivers were able to lock themselves into the front row for the Daytona 500.

The Daytona 500 gets underway at 1 p.m. EST Sunday, Feb. 22, with live coverage provided by FOX beginning with its prerace show at noon.

Ragan, Patrick, Sorenson and others beat the odds to make Daytona 500