The SAFER Barrier debate rages on in NASCAR

There has been a discussion surrounding the lack of safer barriers around certain parts of tracks in NASCAR for a long time now, and it's been reignited after Dale Earnhardt Jr. crashed into an unprotected wall at Texas this past weekend.

Not to beat a dead horse, but lets take a moment to talk about SAFER Barriers in NASCAR. They are a great innovation that have saved countless drivers from getting hurt or worse over the years. Every track has them somewhere, but few have them everywhere. Why is that? Part of it is probably cost-related. Also, the likelihood of a car hitting the walls that are unprotected at a speed that could cause serious injury is unlikely. Unlikely...not impossible.

Whenever someone wants to bring up the fact that tracks need more SAFER Barriers, they are labeled whiners or called paranoid. See the Twitter feed of USA Today's Jeff Gluck for a specific example. I never complain about the lack of soft walls because I see it as a futile argument that isn't going to get me anywhere - and not to mention that I get so immersed in the races, I tend to forget about the issue. 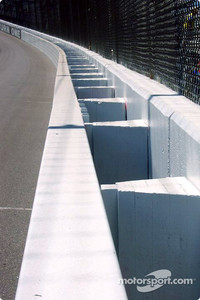 Every time a driver hits a concrete wall that is unprotected by SAFER Barriers, the same thing always happens. There is a sudden uproar, followed by some bickering, a couple stories are posted here and there, and then it dies off by the end of the week. The latest wreck to spark this repetitious chain of events is Dale Earnhardt Jr.'s misadventure in the early laps of the NASCAR race at Texas Motor Speedway.

After what seemed like a momentary lapse in judgement, the two-time Daytona 500 champion dipped his left side tires in the rain-soaked mud and the result was catastrophic. His front end was instantaneously obliterated and the No. 88 was sent careening towards the outside wall; the concrete wall. He hit just past where the SAFER Barrier ends and the car erupted into a fiery inferno before hitting a soft wall in turn one, and then another concrete wall on the inside of the same turn. Jr. walked away from the scary incident unscathed.

Now, I'm not one to over hype something so let me make this clear. I know for a fact that the chances of a NASCAR driver losing his or her life in a crash after hitting an unprotected wall is very, very low. The chances of even getting injured are low. But 'chance' is a dangerous term. Chance is the idea that something won't happen, but could.

Refusing to put a soft wall in a certain area because the likelihood of a major incident there isn't high is a very unwise ideology. In fact, it's just plain foolish. That's like putting your hand over a flame for an extended period of time just to see how long it will take to burn. It won't hurt at first, but you will eventually get singed.

What were the chances that Denny Hamlin would break his back in that last-lap crash at Auto Club Speedway last year? Or how about the likelihood that Mark Martin would spin wildly down pit road and get his car impaled on a wall at Michigan in 2012? And don't forget the infamous airborne incidents between Keselowski and Edwards at Talladega and Atlanta. Unpredictable things happen in NASCAR all the time, and nothing should be discounted just because of its improbability.

In a Nationwide race at Talladega in 2012, Eric McClure hit the backstretch wall at nearly full speed and almost head-on. He was severely injured and yet, that wall was fully protected by a safer barrier. I don't even want to think about how the result would have varied had Eric hit an unprotected wall instead. 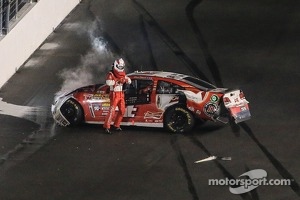 Kevin Harvick was furious when he crashed on the final lap of the 2014 Daytona 500 and found himself barreling towards a concrete wall. In fact, he was quoted as saying; "the tracks for the most part, don't listen to really anything unless it's profitable for their shareholders. When you see somebody spending $400 million dollars on their track and they don't have soft walls around the inside, maybe they could spend $403 million to go ahead and finish the inside of the superspeedway there at Daytona."

Cars have an uncanny way of always finding the worst places on a race track to hit. Situations such as David Reutimann at Watkins Glen in 2011, Elliott Sadler at Pocono in 2010, and Jeff Gordon at Las Vegas in 2008 are the epitome of that. I just don't understand why we are taking a gratuitous risk and dancing on the fringe of disaster when the proper safety equipment is already in existence & ready to be utilized.

So, what happens if the tracks continue to turn a blind eye and go on about their business without addressing the soft wall issue? To be honest, probably nothing. To be sincere, maybe something. All I know is that if that improbable and dark day actually comes...and I pray that it doesn't, we only have ourselves to blame.

Dillon and Larson earn their stripes early at Darlington