The unexpected, and rather sudden, departure of a full time primary sponsor has left NASCAR Camping World Truck Series driver Jeb Burton, and Turner-Scott Motorsports-(TSM), with a serious financial quandary.

The rumored situation was confirmed via a January 31st official team press release that said Arrowhead, a Virginia based manufacturer of electronic cigarettes, has defaulted on a scheduled sponsor payment. The fall out from this financial surprise has raised serious questions regarding whether TSM will be able to field their #4 Chevrolet Truck, to be driven by Burton, on a full time basis in 2014. 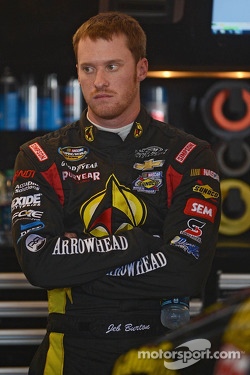 Making the situation even worse is the fact that TSM has been placed into a position of having to lay off some employees due to Arrowhead's failure to honor their sponsor contract. Those lay offs could be as high as 20% of TSM's total work force. With the start of the new season, beginning at Daytona, just a matter of weeks away, this situation could not have landed at a worst time.

Young Jeb Burton burst onto the NASCAR truck racing scene in a very big way last year. It was apparent that his driving skills was a case of that old saying: "the acorn didn't fall far from the tree." He is the son of former NASCAR Sprint Cup driver, and Daytona 500 winner, Ward Burton and the nephew of 21 time Sprint Cup winner Jeff Burton.

Burton is a solid member of a group of young drivers that NASCAR likes to refer to as "Generation Next". This is the next group of young superstars who will carry the sport to new heights in future years to come.

Burton more than earned the right to join this group during his rookie season, in NASCAR's truck series, last year. His 2013 stats included a series win at the Texas Motor Speedway along with five top five finishes and 11 top ten finishes. He also finished a very strong fifth in last year's series' points. His future with TSM and NASCAR seemed brighter than ever.

While Burton was launching his future racing career, Arrowhead was launching their future in the very popular electronic, smokeless, cigarette industry. According to an article from "The Gazette-Virginian", published in May of 2013, Arrowhead President Kathy Farley hosted a product launch party, in South Boston-Virginia, and in her address during the event commented on how a conversation with Ward Burton led to her company's entry into NASCAR sponsorship with TSM and Jeb Burton:

"One day Ward (Burton) and I were in the office talking about tobacco companies and the fact that we couldn't sponsor anything due to FDA regulations," Farley said. "At that time, Greg Nash walked in with an electronic cigarette, and it hit me like a ton of bricks that there are no regulations on electronic cigarettes and that we had a huge opportunity."

The newspaper article went on to state: "Farley said it was only weeks between their first discussion and the company sealing the deal with Turner Scott Motorsports, gaining approval from NASCAR and starting the process of getting the news out to their current customers and potential customers."

Arrowhead Electronic Cigarettes lies under the corporate umbrella of Cherokee Tobacco LLC. From that corporate structure comes a strong clue as to what may have happened with the sponsorship deal with TSM.

In August of 2013 agents representing the USDA Office Of The Inspector General and the Internal Revenue Service converged on Cherokee Tobacco's corporate headquarters with search warrants. The agents reportedly left with several boxes of official company business records. The nature of this action has yet to be revealed and, in all fairness, there is no official word that this investigation has any connection to Arrowhead. 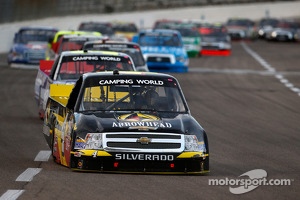 However, when your parent corporation is involved in a government investigation it becomes an extremely time consuming, and very costly, procedure to launch a proper defense. One can't help but think that there might have been an economic trickle down effect that, throughout Cherokee Tobacco, that great impacted Arrowhead to the point that it was no longer able to meet its sponsorship commitments with TSM.

With the start of a brand new racing season only weeks away, the race is on at TSM to find some form of sponsorship replacement so they can campaign their #4 truck even if it's on a part time basis. TSM Marketing, along with Jeb Burton and his family, have been reported to be burning up the telephone lines looking for that badly needed replacement.

Commenting on the situation, via the official TSM press release, Burton said: "Obviously, these are tough circumstances for everyone involved, not just for me, but also for my teammates who are affected. "I am working with Turner Scott Motorsports to identify any potential opportunities for me to get on the track this year."

"The breakout success of Jeb Burton and the entire #4 team in 2013 makes these decisions especially painful," said team co-owner Harry Scott Jr, also via the team press release. "However, we will do everything we can to put Jeb on the racetrack with our organization going forward. He is a great talent and has a great career ahead of him."

Regarding the sad news regarding employee lay offs, the TSM press release said: "The loss of the primary sponsor also means that the company must begin making staff reductions. It is anticipated that the reductions will affect up to 20-percent of the current TSM workforce. The company is moving as quickly as possible to give the affected employees the maximum opportunity to seek employment with other teams."

Scott admitted that it was the potential lay off of his employees that really hurts the most and said: "We are extremely proud of the talent of our workforce here at TSM, and it is very difficult for us to lose anyone within our organization. We understand the way that this affects the lives of everyone involved, and we will do our best to assist in placement elsewhere in the sport."

Said to be a safe alternative to the use of tobacco products, the electronic cigarette industry has become a very lucrative enity within a relatively short amount of time. If you examine retail establishments that sells tobacco products, you will also see large a display space of electronic cigarettes representing an ever growing list of manufacturers. How ironic would it be if one of these other corporations picked up where Arrowhead left off and sponsored Burton and TSM?

What this company would be buying into is a promotional partnership with a racing organization who has achieved some impressive success in a remarkably short amount of time. They would also be entering into a partnership with a young, talented, driver who truly deserves a full time opportunity in a NASCAR national touring series. A driver who is very capable of parking their company logo in victory lane on national television. Talk about sticking to your competition.