Christopher Bell: Eldora is "favorite race track in the world" 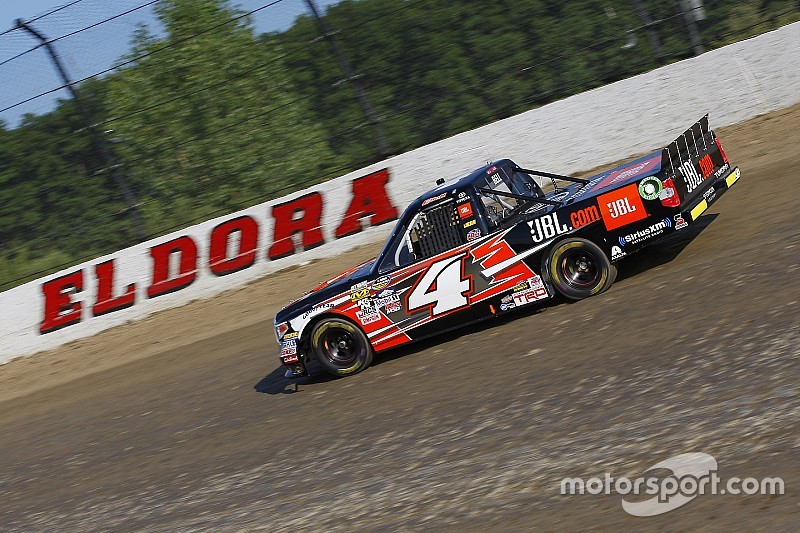 Christopher Bell is heading to his “favorite race track in the world” this week and if that doesn’t spell trouble for his fellow NASCAR Camping World Truck Series competitors, nothing does.

Bell already has three wins this season, including at the series’ most recent stop at Kentucky, and he is no stranger to Eldora Speedway, the half-mile dirt track hosting Wednesday night’s race.

In fact, he won the 2015 Truck race at Eldora when he was running a partial schedule for Kyle Busch Motorsports.

While Bell and his No. No. 4 KBM Toyota team are focused on a championship this season, another Eldora victory is still front-and-center for the 22-year-old Oklahoma native and dirt track star.

“I grew up running a lot of laps there. I think over my dirt career here, I’ve run more laps at Eldora than I have anywhere in the world,” Bell said. “To go back to Eldora riding the momentum from our Kentucky win in the Truck Series is going to be exciting.

“I think I’ve got as good a shot as anybody to win the race and it’s one of my favorite races of the year, so I’m really looking forward to it.”

Bell advanced to the Championship 4 at Homestead last season and finished third. While he is currently second in the series points standings, he leads the playoff standings right now thanks to his three victories.

“After we won a race, our team is focused on the playoff standings more so than the regular season,” Bell explained. “And I feel like we’ve been doing an excellent job of capitalizing on the playoff points by winning as many races as we can, as well as trying to win Stages.

“So, as far as the regular-season standings goes, I feel like this is a very good place for me to catch up on Johnny (Sauter, points leader) because Johnny is not a dirt guy and I am.

“Hopefully, we can close the gap a little bit and then add to our championship standings as well.”

While his NASCAR stock is on the rise, Bell continues to keep his racing portfolio diversified by competing in dirt races around the country when his schedule allows.

He got jump-start on the competition at Eldora this past weekend running three shows with the World of Outlaws Sprint Car Series at the half-mile oval. He was victorious in the “Knight Before the Kings Royal” on Friday night.

No wonder, then, he looks forward to this week’s race more than any other.

“For me, it's a good opportunity for me to add my fourth win of the season,” Bell said. “It's my favorite race track of the world, so I’m excited to go back.”