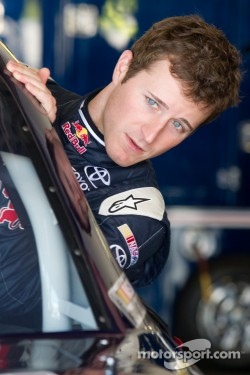 DARLINGTON, S.C. (March 13, 2011) - Kasey led the final 52 laps of the Too Tough to Tame 200 at Darlington Raceway Saturday en route to his third NASCAR Camping World Truck Series victory in four career starts. Kahne, who led a race-high 95 laps, held off a strong challenge from Todd Bodine on the final restart of the race before distancing himself from eventual second- place finisher Ron Hornaday. The win was the second straight for Kyle Busch Motorsports (KBM) and helped the defending owners' champions extend their lead in this year's standings to 11 points after three races.

"I came here this weekend wanting to win -- that was the plan," said Kahne, in victory lane. "This is a tough series. These guys do an awesome job. That restart there with Todd (Bodine) -- our truck was really good once I could get rolling. He tried to get me all the way up to the wall and I think he got himself loose by trying to squish me into the wall. We had a good run down the back and some good laps after that. It was a solid run. I have to thank Kyle Busch for letting me drive the No. 18 Toyota Tundra. It's a lot of fun driving for his team and working with Eric (Phillips), Rick Ren and the rest of the guys. I'd also like to thank Toyota, Flexco, ASE, M&M's, Triad, Camping World and all the fans. What a great crowd out here tonight! This is one of my favorite tracks and I'm really glad I came here."

From the time the trucks hit the track for practice on Friday morning, the No. 18 Toyota Tundra proved to be the truck to beat. Kahne paced first practice, touring the famed oval at a speed of 172.541 mph. The 30-year old driver took the track 23rd for qualifying and sat on the provisional pole until rookie driver Cole Whitt knocked the veteran out of the top spot late in the session with a new track record.

Kahne cleared Whitt heading into Turn 1 shortly after the green flag waved, but an accident in the middle of the pack brought out the first caution of the race. The field was reset with Whitt back on the point. In the early stages of the race Kahne, who ran second to Whitt for the first 27 laps, communicated to crew chief Eric Phillips that his No. 18 Toyota Tundra was a touch free in Turns 1 and 2 but very balanced in Turns 3 and 4.

A Brendan Gaughan spin on lap 25 brought out the third caution of the race. When pit road open, Kahne brought his Tundra down pit road where the KBM crew put on four fresh tires and filled his No. 18 with fuel. Two trucks, including the No. 2 of Elliott Sadler, elected to take just two tires enabling them to be at the front of the field for the restart.

When the race went back to green flag conditions on lap 31, Sadler paced the field with Kahne scored in third with four fresh tires. The Enumclaw, Wash. native had made his way back in the second spot when the fourth caution of the race occurred on lap 36.

Sadler chose the top line, placing Kahne on the inside when the race restarted on lap 40. The three-time Cup Series pole award winner at Darlington Raceway made his way around Sadler and led for the first time when the field crossed the start finish line. He had stretched the lead over the second-place truck to half a straightaway when debris on the backstretch brought out the fifth caution of the race on lap 59.

When pit road opened, the KBM crew put four fresh tires on Kahne's No. 18 and filled with fuel, Cole Whitt's crew elected to take two tires, putting the rookie back up front, When the race resumed on lap 63, Kahne was scored in second followed by James Buescher in third. Buescher got by Kahne and Whitt and went on to pace the field for the next six laps. Kahne was able to make his way and Buescher to retake the lead on lap 70.

"The Lady in Black" collected three more victims on lap 73. When pit road opened, Phillips elected to keep the No. 18 Toyota Tundra on the track and keep valuable track position. Kahne chose the outside line for the restart on lap 79 and by the center of Turns 1 and 2 had the field his rear view mirror once again. He remained at the point until Chase Mattioli brought out the seventh caution of the race on lap 89.

Kahne brought the No. 18 Toyota Tundra down pit road for four tires and fuel and returned to the track scored in the second position behind the No. 2 of Elliott Sadler, who once again took just two fresh tires. When the race restarted, Kahne made quick work of Sadler recapturing a lead that he wouldn't relinquish on lap 96.

"This No. 18 Toyota is awesome on restarts," the eleven time NASCAR Sprint Cup Series winner boasted to his crew during a red flag stoppage brought on by a three-car wreck on the frontstretch.

Already having ample fuel to make it to the end of the race, Phillips elected to keep the field behind his veteran driver by and stayed out when pit road opened. Debris would bring out two more cautions before the end of the race, but Kahne held serve on each restart en route to his second NASCAR Camping World Truck Series victory at the famed raceway.