Now a weekly threat in the NASCAR Camping World Truck Series, Quiroga is getting comfortable with racing life in the U.S. and still dreaming – with a slight twist.

“Recently,” says veteran crew chief Butch Hylton, “he told me something that I read as a sign of real fluency in the language. He’s starting to dream in English.”

Quiroga’s love for racing was fueled by his father, German Quiroga Sr.

“My father used to race in endurance races on the amateur level and I was involved and around it since I was about two years old,” recalls the younger Quiroga, currently third in points, and the only CWTS driver to place in the top 10 of all four races this season. “I was always racing something, whether it was my bicycle, the motocross bike he bought me, so I would not race in the streets, or the first car I got when I was 13.

“I watched a lot of Formula 1. That was the culture in Mexico. Most people who watched races watched the Formula 1 cars, and when I was little I would watch it with my father my uncles and cousins. We’d also see NASCAR on TV, then once a year when there would be a race in Mexico City.”

Quiroga says he didn’t see his first NASCAR race live, in the U.S., until he was in his late teens. He doesn’t recall which track it was at, but he remembers watching Earnhardt.

“The name they put to him – The Intimidator – I thought that was really meant to be,” Quiroga says. “I knew when other drivers looked in the mirror and saw that black No. 3 car, they knew they were in trouble. I learned a lot from watching him – how sometimes he’d fall back to 30th or 40th and come through the field to win races.

“I admired how hard he raced without really trying to wreck anybody. That’s the way I try to race and I really appreciate it when somebody else races you hard and doesn’t try to wreck you.”

His dreams have evolved into realistic goals: to win a NASCAR Camping World Truck Series title, advance to the Nationwide Series, perhaps in 2015, and earn a full-time NASCAR Sprint Cup Series ride. 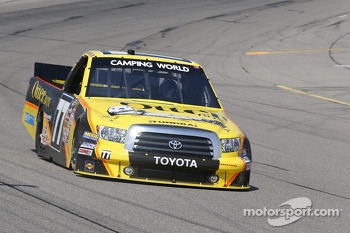 Along the way, with help from Hylton, he plans to become the first Mexican driver to win a race in a NASCAR national series event.

Hylton, who has been crew chief for Dale Jarrett, Ricky Rudd and five others in Sprint Cup and taken Tony Stewart, Kevin Harvick and Jeff Green to victory lane in the Nationwide Series, finished second in CWTS with Quiroga’s Red Horse teammate Timothy Peters in 2012. He’s learned not to doubt Quiroga’s talent behind the wheel, his ambition or his ability to get places in a hurry.

“He’s passionate about whatever he does,” Hylton says. “The guy ran a marathon last year and almost broke four hours. The way he trains – he’s about 5-7 or 5-8, 170 pounds, but all muscle.”

A cross-training fanatic who enjoys his mountain biking, wake boarding, sky-diving and white water rafting, Quiroga is already the first Mexican driver to crack the top five of the Camping World Truck standings.

Of course, he’s accustomed to success. In his 70 NASCAR Mexico Series starts he posted 16 wins and 50 top-five finishes. On his way to his third consecutive crown in 2011, he won three of the season’s final five races and finished first or second in eight of the season’s 14 events.

In 2013, his first season with Red Horse, Quiroga notched six top-10 finishes and captured the first CWTS pole of his career at Iowa Speedway. He led 56 laps of the Iowa race before a late-race accident relegated him to 14th.

When Hylton learned he’d be shifting gears in 2014, sliding from atop Peters’ pit box to Quiroga’s, he knew he needed to work on communication as much as the Red Horse Racing Tundras.

“German and I spent a lot of time together over the holidays – Christmas and New Year’s – watching movies and becoming pretty good friends,” says Hylton, who speaks no Spanish. “We found we had a huge common passion for watching Formula 1 races and we kind of invented our own terminology based on that mutual interest. We’re still working on a few of the finer points. We listen to our (in-race) radio transmissions and review them.

“Working with (Peters) last year, I watched German a lot. We worked hard over the winter to upgrade equipment and make things better. He worked real hard on his fitness, studying tracks, studying races. It’s paid off in good finishes, good feedback. He’s been doing things right, like getting in and out of the pit box. We just need to keep building on what we’re doing and he’ll get that first win.”

Quiroga drove six CWTS races for Kyle Busch Motorsports in 2011-12 but is in just his second full season of CWTS competition. One thing he’s learned is the value of patience.

“When NASCAR arrived in Mexico with the Nationwide Series around 2007, we (like virtually all Mexican drivers) were not prepared to start racing there,” Quiroga says. “We knew some things but not as many as you should know. 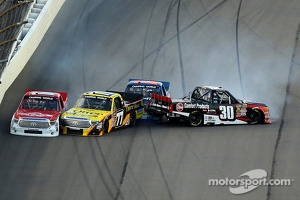 “I think, last year, I was trying to rush for that first win by a Mexican in a national division of NASCAR. I think there was too much pressure in that. This year, we’re just trying to finish every single race in the top 10 and when the win comes, it will come.”

Although he’s blooming at age 34, Quiroga doesn’t see age being a barrier to success, even as younger Mexican drivers like Daniel Suarez, who competes at the touring & weekly levels under the NASCAR Drive for Diversity program with Rev Racing, take up the challenge. In fact, Quiroga considers himself a “low mileage” veteran with a degree of maturity.

“You see a lot of successful drivers (like) Jimmie Johnson and Matt Kenseth in their 30s and even in their 40s doing very well,” Quiroga says. “I think we’re going to be very successful in the next year … and if I can provide help for a younger guy to keep moving to Sprint Cup from Latin American, I’m more than glad to do that.”

Quiroga has already become a spokesman for the sport, providing in-race analysis for Telemundo and cable viewers from Nationwide and Sprint Cup events. In April, he appeared at Hispanicize 2014 in Miami, a marketing event for Latino trendsetters. He also served as a guest commentator on FOX Deportes at Auto Club Speedway’ NASCAR Sprint Cup Series. Mun2, the bilingual sister network of Telemundo, brought Quiroga into broadcast booth to commentate live during the Mexico Series season opener in Phoenix earlier this year.

He knows that top-10 consistency might win him a CWTS title, but checkered flags will bring him notoriety.

“I think we are close, even though we haven’t put everything together yet,” he says. “At Kansas Speedway we were very fast until we had a tire go down and crashed our primary truck in the last minute of practice. Then, we were involved in a wreck on about the first lap of the race and still managed to finish in the top 10. With those kind of experiences we are gaining the confidence that’s going to make us really strong.

“I feel very good about Dover (this week). I like that track. We have a lot of short ovals in Mexico. Last year, we started experimenting with some things that we wanted to use there this year. At the end of the race we were really loose and fell from sixth or eighth to 13th. ”

In the last two weeks, Quiroga has also witnessed change at Red Horse, which consolidated from three teams to two, suspending the underfunded program of Brian Ickler’s No. 7 truck.

"We have been a competitive fixture for nine years in the NASCAR Camping World Truck Series,” said team owner Tom DeLoach. “In order to remain so, sometimes it requires difficult decisions.”

Hylton observes that the team has kept its best personnel, re-allocated all equipment and will be unveiling a new trucks for Quiroga and Peters.

“I think we’re actually getting stronger,” Quiroga says. “It’s hard to lose one of the teams, but we were short on having trucks because of all the wrecks. Now that we have two trucks, everything will be concentrated to help one of us win that championship for Red Horse. I think us, fighting for the championship with our teammate, makes our whole team stronger.”