Earnhardt Jr. Returns To His Roots During Busch Series Test At Daytona 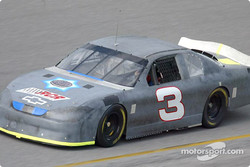 Earnhardt Jr., the 2001 Pepsi 400 champion, has driven in only one Busch Series race since he left the circuit, subbing for the injured Nemechek last May in Concord, N.C.

He'll be driving a limited schedule in his No. 3 Chevrolet Monte Carlo fielded in a joint effort by Dale Earnhardt Inc. and Richard Childress Racing and sponsored by Nabisco Co. Earnhardt Jr. will wheel the No. 3 Oreo Chevrolet at Daytona.

"I'm real happy with it," Earnhardt Jr. said of the test. "With this kind of effort, I would like to drive a few more than just two. We've got a good enough car to win. I forgot how different the cars drove. They have a much more aggressive shock rule and it's just back to the days where they use to beat the kidneys out of the drivers. I'm feeling a little pain, but we're making some gains on it."

Dale Jr. won't be the only Earnhardt in the EAS/GNC Live Well. His older brother Kerry Earnhardt will strap into the No. 12 Supercuts Chevrolet for FitzBradshaw Racing.

Earnhardt Jr. is geared up about running the No. 3, a car number he and his late father Dale Earnhardt have made famous.

"That's our number," Earnhardt Jr. said with a laugh. "Who else is going to run it? I'm pretty happy to be back in the Busch Series. I'm glad the number is still around. It's going to be fun. The fans are real excited."

Fastest among the 18 teams testing in Monday's session was Stacy Compton, who posted a lap of 183.430 mph in the No. 59 Kingsford Chevrolet. Compton will be pulling double duty in 2002, competing in both the Winston Cup Series with the No. 14 Conseco Pontiac fielded by A.J. Foyt Racing and in the Busch Series with owner Tad Geschickter.

Compton tested earlier this month with the Winston Cup car at Daytona and says that testing data has helped in making his Busch Series machine fast during this week's test session.

"The guys have built some nice race cars and Richard Childress horsepower doesn't hurt," Compton said. "We unloaded both cars and ran within a tenth of each other, then we started concentrating on one car trying to figure out what we could do to make it better. Whenever you can go out and get faster and faster all day long, it's a good test."

NASCAR Busch Series testing continues on Tuesday at the Speedway and is free and open to the public with access to the Oldfield Grandstand through the lobby of the DAYTONA USA.

Tickets for the EAS/GNC Live Well 300 and other Speedweeks 2002 events are available online at www.daytonainternationalspeedway.com or by calling the Speedway ticket office at (386) 253-7223.