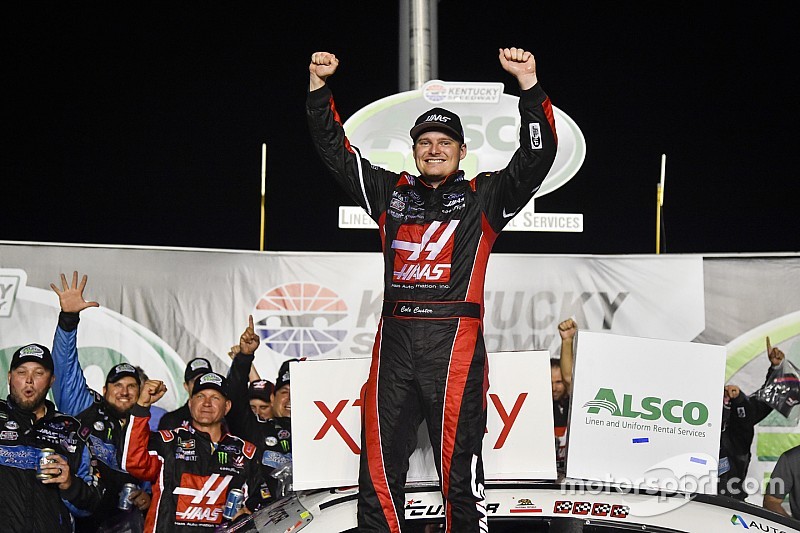 Custer took a solid lead in the third stage then managed to use it to his advance during a round of green-flag pit stops before holding off Bell for the win in Friday night’s Alsco 300.

Custer’s victory was his fifth of the season – most in the series and one more than Bell. Custer only had two career wins entering the 2019 season.

“It’s been unbelievable,” Custer said of his third fulltime season in Xfinity. “This win goes to my team. That car was just unbelievable. They knew exactly what to do with it when the track changed and I was just lucky to drive it.

“You don’t get cars like that very often. I can’t thank everybody enough.”

Asked about Bell getting close to him after the final round of pit stops, Custer said: “I think I was a little too conservative on my green-flag pit stop. It worked out good. He got closer and I was definitely sweating a little bit.

“But we had a fast car and were able to pull away at the end.”

Only five cars finished on the lead-lap a record low for a series race at Kentucky.

With 50 of 200 laps remaining, drivers began a final round of green-flag pit stops for tires and enough fuel to make it to the end of the race.

Once the cycle of stops was completed on Lap 155, Custer – who went into the stops with a large lead – emerged as the race leader but only barely edging out Bell.

With 30 to go, however, Custer was able to sustain about a 1-second lead over Bell with Reddick in third. With no additional cautions in the race, Custer’s lead only grew as the laps wound down.

Bell made it a sweep of the first two stages, holding off Brandon Jones to earn his 10th stage win of the 2019 season.

Following the break between Stages 1 and 2, all of the lead-lap cars elected to pit and Justin Haley was the first off pit road thanks to a two-tire pit stop.

On the restart on Lap 52, Haley led the way followed by Reddick and Gragson.

Jones got around Haley off Turn 2 on Lap 54 to take the lead for the first time in the race.

Austin Cindric hit the Turn 4 wall on Lap 55 while racing with Haley to bring out another caution. Both drivers took their cars to pit road for repairs.

Jones continued to lead on the restart on Lap 60. He was followed by Gragson and Bell.

After the restart, Gragson went to the inside of Jones and cleared him off Turn 2 to take the lead for the first time in the race.

With 25 laps to go in the second stage, Gragson held a small lead over Bell, who was closing quickly while Jones ran in third.

Bell finally got around Gragson on Lap 67 to retake the lead just before Ronnie Bassett Jr. spun in Turn 1 with a flat tire that brought out the caution.

The race returned to green on Lap 73 with Bell leading the way.

With 10 laps remaining in the stage, Bell had opened up a 1.5-second lead over Jones as Custer moved up to the third position.

Bell cruised to the Stage 1 win in dominating fashion, leading all 45 laps. It’s the ninth stage win for Bell this season.

Cindric started on the pole but Bell quickly got below Cindric in Turns 1 and 2 and came out with the lead.

On Lap 5, Ja Junior Avila wrecked off Turn 3 to bring out the first caution of the race. After an extensive cleanup of the track, the race returned to green on Lap 12 with Bell in the lead followed by Cindric and Allgaier.

After 15 laps, Bell had opened up almost a 1-second lead over Cindric with Gragson running in third.

By Lap 30, Bell had opened a more than 2-second lead over Cindric. Gragson remained in third, followed by Allgaier and Custer.

Josh Williams had to start the race from the rear of the field after his team had to change engines over the weekend.

Fight breaks out during red flag of NASCAR Xfinity race

Snider hits wall after teammates Chastain, Haley squeeze each other in corner

Allgaier on Richmond win: ‘I had to make up for damage early’