HUNTERSVILLE, N.C. (April 8, 2014) - Jimmy Weller will make his NASCAR Nationwide Series debut at Richmond International Raceway on Friday, April 25. The Hubbard, Ohio native will pilot the No. 55 Chevrolet Camaro in a partnership effort between Viva Motorsports and SS Green Light Racing in the 250-lap event at the Virginia short track.

"I'm looking forward to making my NASCAR Nationwide Series debut later this month at Richmond International Raceway," commented Weller. "It means a lot to me to be able to take the next step in my career and finally compete in the Nationwide Series. I'm also really excited that I'll get to race at Richmond-it's a fun track and one that I've had success at in the past, so I'm excited to get back there." 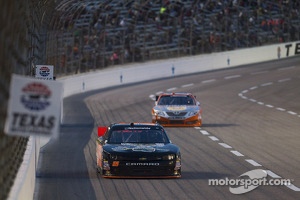 While the race will mark Weller's first NASCAR Nationwide Series event, it will not mark the first time he's competed at the Richmond, Va. venue. Weller competed in two NASCAR K&N Pro Series East races at the 0.750-mile track. After finishing 12th in his first event at the speedway, Weller returned to the track in April 2013. In that event, Weller was racing inside the top 10 when he was involved in an on-track incident. The driver rebounded to finish in the 17th position.

"We're excited to have Jimmy in the No. 55 Chevrolet Camaro at Richmond International Raceway," commented Bobby Dotter, owner of SS Green Light Racing. "We have a cool opportunity to partner with Viva Motorsports this year, which allows our drivers to climb the racing ladder even further. Jimmy has always done a great job for us in the Camping World Truck Series and I'm excited to be involved in his Nationwide Series debut at Richmond."

"With our shops located just down the street from each other, Viva Motorsports and SS Green Light Racing have always had a good relationship," commented Jamie Dick, owner of Viva Motorsports. "We're excited about our recently announced partnership, the possibilities it brings to each of our teams, and having the ability to work with great drivers like Jimmy Weller."

Another week, another win for Elliott

Todd Shafer thunders back into the NASCAR CWTS at Kansas