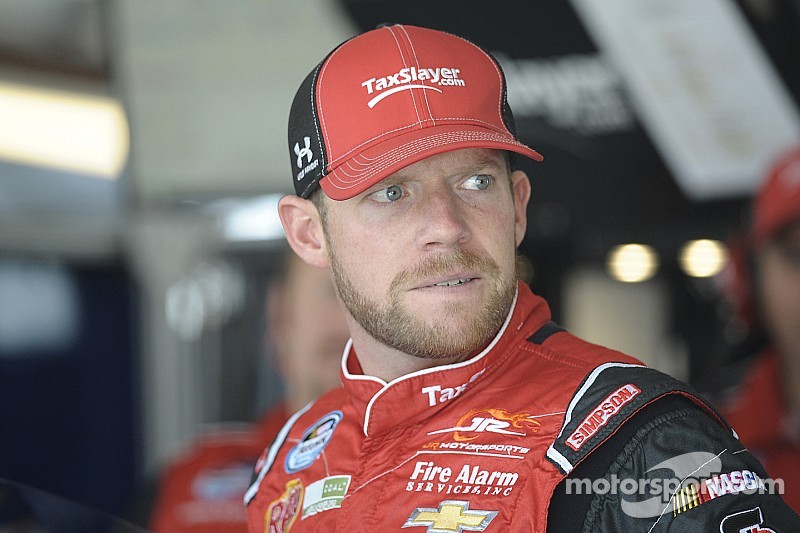 Smith, who entered the Kansas Lottery 300 second in the point standings behind his JR Motorsports teammate Chase Elliott, wrecked his primary car in qualifying.

The organization had less than two hours to prepare the backup car, take it through inspection and out to pit road for the start of the race.

Any time you have to roll a backup car out two hours before a race, you have to expect anything to happen.

The No. 7 JRM Chevy made it to the grid as the National Anthem played – but Kansas Speedway will likely be Smith’s swan song with four races to determine the championship. Smith finished 22nd and lost 12 points to Elliott, who finished 10th.

Smith started the race from the rear of the field and moved up to 33rd on the first lap. Due to four cautions in the first 50 laps, Smith was able to race into the top 12.

Although Smith held his own through the mid-section of the race, after pit stops something felt wrong with the car.

“I think it was flat before we left pit road,” Smith said.

“Tires are up,” the crew told him.

“Then we broke something bad,” Smith replied.

On Lap 140, Smith’s diagnosis proved correct when a sway bar arm fell from his car.

The team called him back to pit road for further repairs. Smith dropped to 23rd, seven laps down when the race finally went green on Lap 153.

“It went from bad to worse to a disaster, so sorry about that,” Pemberton said.

Smith caught a break as the cars got up to speed and Elliott bounced off Mike Bliss and into Jamie Dick to ignite the ninth caution. Once the race went green, Smith’s car came alive.

“Whatever we did to it, it feels better now than it did before,” he said.

But at that juncture all Smith could do was ride it out to the end and watch Kyle Busch win his 69th career Nationwide Series.

Smith finished 22nd and dropped to 38 points behind Elliott.

“Any time you have to roll a backup car out two hours before a race, you have to expect anything to happen,” Smith said. “My guys did a great job of getting the car ready to where we could get to the grid with it, much less be competitive for the first stage of the race.

“We fought with it. It’s kind of what we anticipated for the day and at this point – obviously disappointed, it’s been a long year. But appreciate Hunt Brothers being on the car and we’re going to keep going and get as many Nationwide Series points as we can.”