Stenhouse Jr. follows up NNS win in Iowa with pole at Charlotte

“Roush Yates is putting some great engines under the hood,” Stenhouse Jr. said after making his qualifying run on Saturday morning.

After turning a lap at 28.878 seconds, Stenhouse Jr. wasn’t sure that his time would be good enough for the pole, even though he had the fastest car among those locked into the race. His primary concern was a Roush Fenway Racing team car that went out last in the qualifying session -- the No. 16 car, driven this weekend by Matt Kenseth. 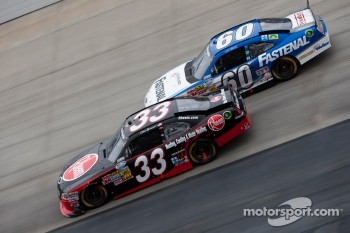 While waiting for Kenseth to go out for his qualifying laps, Stenhouse Jr. expressed concern as to whether or not the Roush Yates engine under Kenseth’s car was as good as his.

Kenseth wound up unable to knock his teammate off the pole. Instead, he’ll start the Top Speed 300th right behind him in the third spot after posting a lap time of 29.056 seconds.

The third Roush Fenway Racing driver on the starting grid, Carl Edwards, claimed the provisional pole with his lap of 29.151seconds, but was knocked from the top spot by Kyle Busch, with a lap at 29.139 seconds, and was shuffled back further by runs from Kevin Harvick (28.901 seconds) and Kenseth.

After making his qualifying run, Edwards thought that maybe his time would be good enough to keep him on top, as long as the weather cooperated.

“I don’t know if people will beat that,” Edwards said of his lap time.

The weather ended up not cooperating with Edwards and lap times picked up under the cloudy conditions. By the end of qualifying, Edwards was in the fifth spot. Harvick was second and Busch was fourth.

So we’ll see how it does in the race.

Kenseth wasn’t the only threat for the pole among the go-or-go-homers. Sam Hornish Jr., who went out next to last, posted a time of 29.218 seconds, which was good enough for the seventh starting spot.

Former Formula One champion, Kimi Raikkonen, will make his Nationwide Series debut, starting from the 22nd position after posting a qualifying time of 29.896 seconds.

“The car feels good,” Raikkonen said of his No. 87 NEMCO Motorsports ride. “So we’ll see how it does in the race.”

Forty-five cars attempted to qualify for the 43 starting spots available in Saturday’s race. Chase Miller and Charles Lewandoski were the two drivers unable to secure positions on the starting grid. David Green took the 43rd and final spot in the starting field through benefit of the past champion’s provisional.