Force and Millican aim to peak at the right time 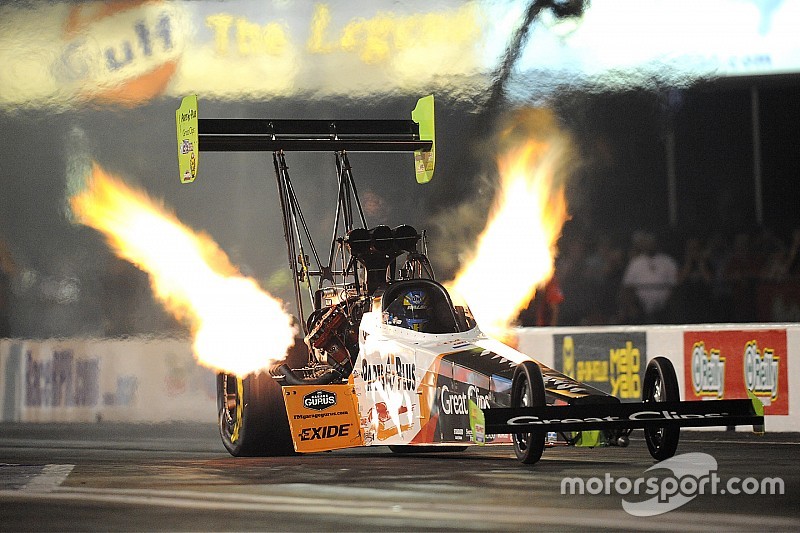 Qualifying No. 1 really isn’t working out for two racers in this year's NHRA Mello Yello Drag Racing Series. Courtney Force and Clay Millican aim for a slight adjustment in form this weekend in Atlanta.

For the past three races, Courtney Force’s John Force Racing Chevrolet Camaro SS has been the class of the Funny Car field on Friday and Saturday but in all three races she was done before the final round: Courtney struck the tires in Vegas’ first round, went to the semifinals at Houston and drifted into the wall for immediate disqualification during her first-round race in Charlotte.

The winners of those three races, Tommy Johnson Jr. and reigning champion Ron Capps (twice), didn’t have the best qualifying results but were the class of the field when it mattered. Capps, in particular is hitting his stride after less than palatable results heading into Houston’s event. He mopped the field in the first of three straight Southeastern events and has to be the favorite heading into the Lucas Oil Southern Nationals at Atlanta this coming weekend. No doubt he’ll be bringing a broom - just in case Capps and his Rahn Tobler-led Don Schumacher Racing Dodge Charger R/T hits the marks again this week and complete the sweep.

On the Top Fuel side, this Southeastern Swing has been dominated in qualifying by veteran Clay Millican, a driver still looking for his first NHRA Wally winner’s trophy. Like Force, Millican has hit his stride in Friday and Saturday qualifying sessions but has yet to pull away from the competition on Sunday. Despite earning No. 1 at Houston, Millican was unable to get past the third round of competition, as he fell to finalist Steve Torrence in the semifinals. At Charlotte, Millican smoked the tires in his second round and was out of Four-Wide competition.

Millican’s inability to compete past the semifinals in both of these races helped Leah Pritchett claim her third race win of the year in Houston while Torrence secured his first 2017 Wally trophy at Charlotte.

“We’re obviously disappointed,” Millican said. “Overall it was a good weekend for us. We ran the same motor the past three days and didn’t hurt any parts. The car ran great with the exception of that last run.

Now it’s on to the third race in a row in Atlanta for these two. No doubt they’re hoping not to win a No. 1 qualifying position – only Pritchett has been able to convert from No. 1 so far this year, accomplishing the feat in the first two races of the year (Pomona and Phoenix). Maybe it’s better to be midfield in 2017, without the pressure of being top dog in qualifying

In Pro Stock parity rules. With six races run to date, there have been six winners, all driving Chevy Camaro race cars: Greg Anderson, Bo Butner, Jason Line - all from the Summit/KB Racing stables - Shane and Tanner Gray of Gray Motorsports and last weekend’s victory by Chris McGaha, who had been considering a schedule that didn’t include Atlanta. McGaha intends to run Atlanta this coming weekend although it hadn’t been on his original list. Winning can do that; it makes a racer hungry for more.

While all of the professional categories were oversubscribed for the Four-Wide NHRA Nationals last weekend, 16 racers are entered for each category except Pro Stock Motorcycle, where there are 23 cars intending to be on the grounds, vying for one of those 16 starting positions. Although Pro Stock Motorcycle is making only its third appearance in the season-long hunt for a championship, it has two victors thus far: Eddie Krawiec’s Vance & Hines Screamin’ Eagle Harley-Davidson won at Gainesville and 2010 champ LE Tonglet was the Four-Wide victor on his WAR Racing Suzuki.

Weather will, as always play a big part of who’s got a hot hand in Commerce, GA this weekend. While rain is expected on Friday and Saturday, so are cool temps, particularly on the first day of qualifying. For that reason, NHRA decided on earlier than customary qualifying times on Friday, just to make sure the tire temps are acceptable. Sunday is supposed to be clear with mild temps.

Alexis DeJoria, who missed last Sunday’s race to attend to family matters, is on the list for Funny Car but the team announced on Thursday she’s sitting out a second weekend. Chad Head mans the Kalitta Motorsports-prepped Toyota Camry again this week, while DeJoria stated she’s looking forward to rejoining her racing family again as quickly as possible.

Schumacher, C. Force, Butner and Krawiec are No. 1 qualifiers at the Southern Nationals