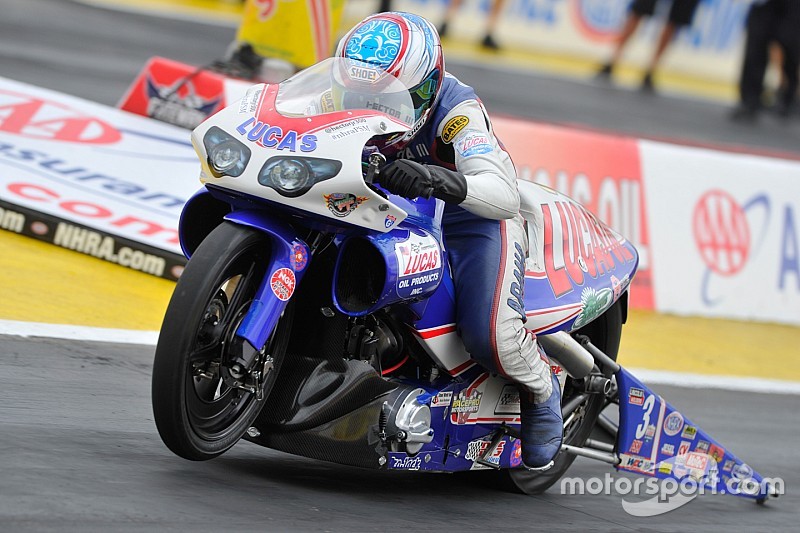 Hector Arana Jr. didn’t start his 2016 NHRA Mello Yello Drag Racing Series Pro Stock Motorcycle season the way he wanted and he’s had a month to think about it.

Concord, N.C. – This weekend’s seventh annual NHRA Four-Wide Nationals presented by Lowes Foods at zMAX Dragway marks the second of 16 races for the Pro Stock Motorcycle class, and a first-round loss at the opener in Gainesville is enough to provide plenty of motivation for Arana Jr.

The team has worked hard to make improvements on his Lucas Oil Buell during the time off and Arana Jr. has been anxiously awaiting the one-of-a-kind race at zMAX Dragway.

“We strive to be the best, so that helps us always stay focused,” Arana Jr. said. “That is part of the reason why we've been in the sport for so long. My dad (Hector Arana) has been very persistent on wanting to be the best. That's why he was able to get a championship, and now we're hungry for more. He wants another one, and I want many of them – not just one, but many of them.

“Gainesville was a good test session to see where we stacked up against the field. We definitely learned some things we need to work on, and now we have a direction on where we need to steer our team and to progress and move forward. We're definitely confident and we're excited. We found some things, and we feel really, really good about Charlotte."

Antron Brown (Top Fuel), Jack Beckman (Funny Car), Larry Morgan (Pro Stock) and Andrew Hines (PSM) were last year’s winners. The race will be televised on FOX Sports 1 (FS1), with qualifying highlights on April 23 at 10 p.m. and finals coverage on April 24 at 4:30 p.m. Arana Jr., who has 11 career wins in the class, struggled to find any sort of rhythm in Gainesville, qualifying 14th and only slipping into that spot on his last chance.

It followed with a first-round loss and then a considerable amount of time off to stew about what went wrong. But Arana Jr. and his team worked quickly to find solutions and they believe they’ve found something heading into the Four-Wide Nationals.

“We feel like we figured out some issues we had, so hopefully we'll be back on top and running strong,” said Arana Jr., who won twice in 2015 and finished fifth in the points standings. “We'll do our best and see what happens this weekend. We definitely have what it takes. We just had a little mishap with some parts. That's just part of racing. Hopefully, we've been able to fix everything that was wrong, and we'll be good to go. We feel pretty confident.”

That confidence is helped by Arana Jr.’s success at the unique race that will pit four motorcycles going down the track at one time. It provides a healthy challenge but it’s a worthwhile one in the eyes of Arana Jr. He won the event in 2013 and advanced to the final group of four a year ago, setting both ends of the track record during the weekend, but Arana Jr. wasn’t keen on giving out too many secrets for tackling the challenges the race presents.

“The only thing I can say is you've got to stay relaxed and stay focused,” said Arana Jr., who qualified No. 1 at the race last year. “I can't give away all my secrets, or I'll be helping out the competition!"

But Arana Jr. did note just how important it is to be locked in at all times throughout the weekend.

“I just focus on what I do at a regular race and you just have some extra lights,” Arana Jr. said. “You have to pay a little more attention to the other two riders who are racing with you."

Arana Jr. will also have to deal with a massive 25-bike field at the NHRA Four-Wide Nationals, including Hines, who has two wins at the race and is the two-time defending world champion in the class. Other challengers include Eddie Krawiec, who won in Gainesville, two-time world champion Matt Smith, LE Tonglet, Chip Ellis and Angelle Sampey.

Arana Jr. loves that challenge but he also enjoys the level and amount of competition in the class.

“Everyone has really stepped up their game,” Arana Jr. “I didn't get (qualified) until the last run in Gainesville, and Matt Smith didn't get in, so it's a tough field. It's good for the sport, and it shows that our class is strong. Hopefully people see that we're the strongest pro class in NHRA, as far as our vehicle count. That's exciting and it's good for us."

Mello Yello Drag Racing Series qualifying will feature two rounds at 4:30 and 6:30 p.m. on Friday, April 22 and the final two rounds of qualifying on Saturday, April 23, at 2 and 4 p.m. Final eliminations are scheduled for 12 p.m. on Sunday, April 24.