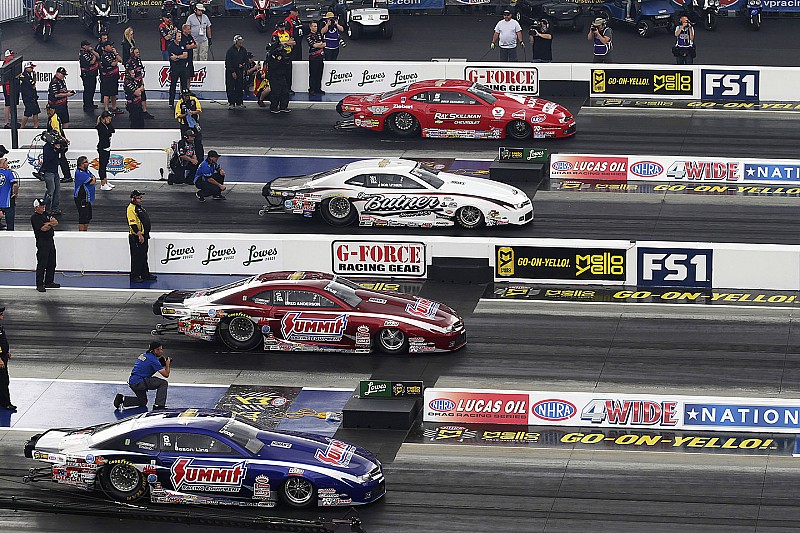 The start of the electronic fuel injection (EFI) era in the Pro Stock category of NHRA’s Mello Yello Drag Racing Series competition has been smooth for only a single team this year...

The move to EFI was announced at the end of July during the first race in NHRA’s grueling Western Swing of events at Bandimere Speedway (Denver), Sonoma Raceway and Pacific Raceways (Seattle), held on three consecutive weekends. In addition to the adoption of EFI which negated the use of pronounced nose cones, NHRA mandated a 10,500 rpm limit on its naturally aspirated 500-cubic-inch engines and shortened the wheelie bars by a couple of inches for the 2016 campaign.

Beginning with the Sonoma race, all Pro Stock cars were required to face outward to fans and have intake manifolds uncovered. Most teams began to do this at Bandimere, shortly after the new rules were announced. Some never did uncover their manifolds and that rule was relaxed by the start of the 2016 season. Many teams still keep their engines uncovered; others use a towel to hide their EFI and manifolds, the latter largely either built or modified in-house.

A full field for the season-opener

These rules didn’t give the racers much time to prepare, as the NHRA season ends in the middle of November and the winter holidays keep many away from their shops. Nonetheless, a full field of 16 cars were on-hand to contest the first race of the season, the 56th annual Winternationals on the Auto Club Raceway at Pomona dragstrip, held Valentine’s weekend in mid-February.

At that race, it was Greg Anderson who took home the hardware; at Wild Horse Pass Motorsports Park two weeks later, Jason Line was the winner and the duo’s Summit Racing teammate Bo Butner took the No. 1 position in qualifying.

Where were the rest of the crowd? Only 14 Pro Stock cars made the bell for the Phoenix area race, as Shane Gray decided to circle the wagons and work on his setup for the next round in Gainesville, Fla. in a couple of weeks. Aaron Strong didn’t have his equipment ready to go to Phoenix.

From the start of the year it’s apparent that Summit Racing (fielded by Ken Black Racing) had their acts together, which stands to reason. Located near many NASCAR teams outside Charlotte, they’ve got local resources in the business that they can count on, where other far-flung teams simply don’t. Everybody had the same edicts to follow - at the start of the year, Summit Racing got it together best - despite whining louder than anyone about the new rules, something Line points out every time he’s in the media center.

Now with six of 24 contests complete, it is apparent Summit Racing’s Chevrolet Camaro racecars are head and shoulders above all others in their EFI understanding. They’ve won every single race - Anderson and Line are tied with three each - and Line leads the standings by 79 points over his teammate. Butner is third, Drew Skillman, in his second year driving for Elite Motorsports stands fourth, independent Chris McGaha, who has a good understanding of EFI is fifth, both of those drivers racing Camaro hot rods.

Only Allen Johnson, discarded by Mopar Motorsports after 20 years in favor of working with Elite’s Erica Enders-Stevens and Jeg Coughlin Jr. breaks the Chevy stranglehold in the top six in his family-run Dodge Dart, and he lags Line by 371 points. It’s apparent Johnson and father/engine builder Roy Johnson are beginning to creep up on the Chevy troops, albeit slowly. Vincent Nobile (Elite Camaro), Enders-Stevens (Elite Dart), Coughlin Jr (Elite Dart) and independent Alex Laughlin’s Camaro round out the top ten.

Nick Ferri, the engineering leader at Elite Motorsports and its engine-building concern, Elite Performance, is learning as he goes. A racer weaned on carburetors, Ferri is grateful to have the expertise of Jake Hairston on his crew. “I’m learning the system a lot,” Ferri said. “The biggest hurdle is still the rules and regulations and the conditions they’ve given us with the injector - it’s large. They did approve another injector that’s small, but we just haven’t had the time to test it.”

Ferri is responsible for four cars: two Mopar-backed Dodge Darts for reigning consecutive two-time winner Enders-Stevens and five-time Pro Stock champ Jeg Coughlin, Jr. The team prepares Chevrolet Camaros - that they used in 2014-2015 - for last year’s rookie of the year Skillman and for Nobile, who won the rookie award in 2011.

When he first began dyno-testing the new specification engines in the fall of last year, Ferri said they were 210 horsepower down from 2015; by the time they arrived at Pomona, that had shrunk to a 40- horsepower deficit. Still, both of Elite’s Dodge Darts were on the trailer at the most recent Houston contest after the first round, their Camaros exiting after quarter-final action.

After Houston (the next contest is in Atlanta next weekend) Ferri admitted he’s still playing catch-up with all the new changes to the cars, “But I truly feel that we are on the cusp of making a big turn-around here very soon.”

Chris McGaha, who won three races with his Camaro last year as an independent owner/builder in this highly competitive class, has lots of experience working with EFI in his sportsman drag racing endeavors. He, too, reports that he’s down from last year’s specs by about 40 horsepower and 40 lb-ft of torque. He went to the finals against Line in Phoenix, losing by less than .05 in the quarter mile dash and has been looking good through Houston, accounting for that fifth-place standing.

Changes made due to the EFI mandate

When NHRA mandated EFI it also removed the hood scoops that took air directly into the manifold. Air now enters low in each car’s body through an elephant tusk-looking scoop mounted on the manifold and leading to the base of the front end. “You’re getting the ambient temperature whether it’s mounted high or low,” he allowed. McGaha believes the cars are going faster down the racetrack - even though the numbers don’t show it yet - and explains, “It’s either not having the scoop or having the EFI cleaning the motor up so much that it can accelerate different. It’s one of the two, but I feel they’re going faster than what the dyno shows.”

NHRA allows two different injector sizes at this time. It started with the Holley unit that yields 160 pounds of pressure per hour and then offered a second Holley solution, one that puts out 80 pounds per hour. Teams have the option of using either one and, for these two tuners, Ferri and McGaha, the larger unit is their choice. Ferri thinks the injectors are “too big. They’re big enough to run a 900 cubic-inch nitrous motor.” McGaha was “for the big ones before they even set it in play. I’m glad they mandated the big one; I would have had this or bigger.”

These are just a couple of items that are vexing Pro Stock tuners six races into the season, but as the 24-race campaign heats up, no doubt there will be more as they find the time to do added research and development on their Chevrolet and Mopar engines. There’s plenty they can change in the valve train, along with cylinder head and port revisions. But it will take time and, with the season in full swing, it won’t be easy.

Less and less teams each race

What’s more bothersome is the declining number of Pro Stock entries at each race. At Houston there were only 13 entries, allowing byes in the first two rounds for Anderson and Line, respectively. In six races, only three - Pomona, Las Vegas, Charlotte Four-Wide - had full, 16-car entries in a category that used to boast upwards of 20 regulars before the new edicts were written.

While one NHRA official inaccurately said he expected the Pro Stock racers to regain the .15-second they’ve lost with these mechanical changes from 2015 to this year by the Gatornationals, the fact that fields have contracted so heavily and that one team has dominated the competition a quarter of the way through the year doesn’t bode very well.

It’s easy to arm-chair through all this and say Pro Stock should have gone to EFI back at the change of the century at the latest, but it didn’t happen. NHRA has always been sensitive to the costs involved in making wholesale changes to established categories and in this instance what they’ve done hasn’t made Pro Stock numerically healthy. Still, with new drivers like Alex Laughlin in the top 10 and possibly others putting their programs together that we don’t know about - yet - perhaps Pro Stock can weather this storm and come back with strength.