Ron Capps looks to extend final round streak to five

The most recent winner at E-Town for DSR can win another title at the track this weekend in the 43rd annual Toyota NHRA SuperNationals.

The first DSR driver who won there can win again but won't have to don a firesuit and helmet to do so.

Ron Capps, driver of the NAPA AUTO PARTS Dodge Charger R/T, won the Englishtown title in 2006, and 34 years before that, DSR owner Don Schumacher drove to the title in 1972 for one of his five NHRA titles as a driver/owner, who has added 175 titles solely as an owner.

Capps, now 45, was 7 years old when his current boss won at Englishtown. 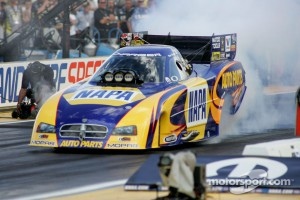 "That is good trivia. It's cool," Capps said.

"There is so much history at Englishtown. As a kid in California I went with my dad to great dragstrips like Lion's, Irwindale, Ontario ... all legendary dragstrips. But everybody on the West Coast talked about Englishtown in New Jersey.

"I never thought one day I'd be able to go there let alone race there and win."

The other DSR Funny Car drive to win there was Whit Bazemore in 2003.

Capps recalls the year he won the race when it was held on Father's Day.

"That just made it better; to be able to look at that trophy and remember it happened on Father's Day."

This Sunday won't be Father's Day, but it could be another memorable race day for Capps, who has advanced to a career-best four consecutive championship rounds with crew chief Rahn Tobler and assistant crew chief John Collins. The team won the event title on May 6 at Atlanta Dragway.

"I've been so much more relaxed," Capps of the team's run. "My confidence is there again, and I attribute that to Rahn, John and the whole NAPA team.

"This car has made it to the finish line under power for 49 of its last 50 runs, and that is unheard of. In qualifying a couple races back after we ran a 4.16 - and that was good on a hot track - you would have thought we hadn't qualified. The expectations are always so high and that's what drives this team."