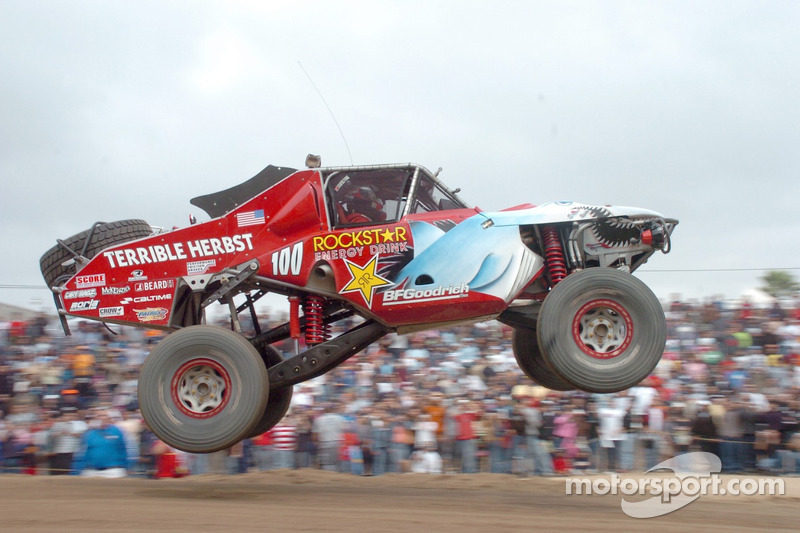 ENSENADA, Mexico—SoCal desert racers Larry Roeseler (in photo) and Jim O’Neal, two of the all-time winningest racers in the history of the sport, each have 16 career class wins in this week’s 46th annual Tecate SCORE Baja 500 desert race. They are typical of the entries from around the world are officially preparing for Round 3 of the 2014 SCORE World Desert Championship, being held this week in Mexico’s Baja California Norte, starting and finishing in Ensenada, the seaside port on the Pacific Ocean, 80 miles south of San Diego. The race will feature a course of 447.86 miles that includes some new or seldom-used areas.

Roeseler, 57, of Boulevard, Calif., is racing again this year as a second driver for Tim Herbst in the No. 19 Monster Energy Terrible Herbst Motorsports Ford F-150 in SCORE Trophy Truck and they finished second in this year’s season-opening Tecate SCORE San Felipe 250.

O’Neal, 67, of Simi Valley, Calif., is racing this year with on the team with rider of record Mark Winkelman, Cedar Hill, Texas, in Class 30 for riders over 30 years old. The team finished second in Class 30 in San Felipe and won their class in Round 2 at the Inaugural SCORE Imperial Valley 250 in April.

SCORE is celebrating its 41st year as the world’s foremost desert racing organization in 2014 and this race is traditionally one of the most popular events on the SCORE schedule. Most the world’s best desert racers will be in action at this year’s 46th anniversary of the Tecate SCORE Baja 500, the original desert race produced by SCORE on July 26, 1974. It is an elapsed-time race with staggered starts as the green flag on Saturday will drop first for the motorcycles and ATVs at 5:45 a.m. and approximately 10 a.m. for the cars, trucks and UTVs. All vehicles will have 18-hour time limits to be an official finisher.

The Tecate SCORE Baja 500 is one of the top motorsports events in the world. It was started originally in 1969 by the NORRA organization. Mickey Thompson and his SCORE International organization were asked by Mexican government to take over the event in 1974. Sal Fish ran and later owned and produced the Tecate SCORE Baja 500 for 39 years until he sold SCORE to Roger Norman in December of 2012.

Ensenada has been the heart and soul of the Tecate SCORE Baja 500 as the popular summertime race. This year will mark the 41st time it has started and 37th time it has finished in Ensenada.

With nearly 275 entries competing in 35 Pro and 6 Sportsman classes for cars, trucks, UTVs, motorcycles and ATVs expected at the start line on Saturday, entries to date have come from 20 U.S. States along with Austria, Belgium, Canada, Denmark, Ecuador, France, Germany, Great Britain, Guatemala, Italy, Japan, Mexico and the Netherlands. Late entries will be accepted at late, on-site registration through 5 p.m. Friday. There are 74 of the racers who have combined for 204 class wins.

Colorful race week festivities will include several first-time events for SCORE, starting with qualifying for SCORE Trophy Truck and Class 1 followed by the Monster Energy SCORE Kick Off Party on Thursday from 7 p.m. until Midnight at the start/finish line area in the heart of Ensenada. With donations for La Cruz Roja Mexicana (Mexico’s Red Cross), the event will be include a racer’s autograph party and vehicle display

Friday will see the day-long, pre-race Manufacturer’s Midway and contingency festival in the start finish line area in Ensenada.

On Friday evening, the Monster Energy Papas Y Beer SCORE Street Party will be held from 7 p.m. to Midnight on Avenida Ruiz in downtown Ensenada.

During the race on Saturday the Monster Energy SCORE VIP hospitality area, will be part of the start/finish line compound. The area will also include the massive SCOREvision LED screen broadcasting race festivities along with start and finish line interviews.

All of the week’s festivities will be aired both live and same-day including the race, on the SCORE Dirt LiveHD race week shows, airing via the internet on the SCORE website.

The Riviera del Pacifico Cultural Center, in the heart of Ensenada, will again be the site of many of the activities surrounding the Tecate SCORE Baja 500. Racer registration and Media registration will be held in the Red room at the Riviera on Thursday, Friday and Saturday and the SCORE Media Center will be in the Red room during the race with internet access and live race updates including unofficial elapsed times.

In the Cathedral Room at the Riviera will be pre-race media conference as well as the mandatory pre-race racer’s meeting on Friday. The post-race awards celebration will be in the outdoor Riviera amphitheater at noon on Sunday.

The start/finish line for the race will once again be adjacent to the Riviera del Pacifico Cultural Center as well.

On Thursday qualifying for starting positions will be held for both the SCORE Trophy Truck and the unlimited Class 1 and will be held over a special course of approximately five miles in length near Ensenada and is not open to the public because of safety considerations.

While most entries in these two top classes are expected to qualify, those who elect not to will be given the remaining start positions in the elapsed-time race based on the original drawing or entry into the race. Taped highlights of qualifying will be shown starting Thursday evening on the SCORE website.

Among the overall race winners returning are nine drivers who have combined to win 16 overall car/truck titles and three riders who have combined to win 11 overall motorcycle titles, including drivers and riders from five of the last six 4-wheel overalls and the last two motorcycle overall winners. Leading the way with multiple overall wins in this race are Larry Roeseler with 11 overall victories (including nine on a motorcycle), Robby Gordon with four, Troy Herbst and Bryce Menzies with two in 4-Wheel, and in 2-wheel, Roeseler has nine and David Pearson and Colton Udall with one each.

In the field are 74 racers who have combined to win 204 combined class wins in the history of this race. Leading this prestigious group of returning multiple class winners are Larry Roeseler and Jim O’Neal who each have 16 class wins which is the tied for third-most in race history. The other racers with the most multiple class wins in this race who are back to attempt to add to their winning totals are: Troy Herbst and Donald Moss, Mike Cafro (6), Dan Chamlee, Jim Dizney, Robby Gordon, Rick D. Johnson, Rob MacCachren and Clyde Stacy (5 each), Vic Bruckmann, Eizaburo Karasawa and Adam Pfankuch (4 each) and Steven Eugenio, Elias Hanna, Mike Julson, Wayne Matlock, Justin Matney and J. David Ruvalcaba (3 each).

Stacy and Hanna have moved to SCORE Trophy Truck, Fletcher has moved to Sportsman Buggy,

Accepting the opportunity to preside over the festivities of this year’s 46th Tecate SCORE Baja 500 is Xavier Gavory, 35, of Paris, France, the head of the competition department and sport coordinator of the Dakar Rally. With 10 years experience in motorsports series FIA GT, ETCC, FIA World Touring Car Championship including six season as General Coordinator of the Intercontinental Rally Challenge.

Gavory has been with ASO, promoter and organizer of the Dakar Rally since 2011 where for the last three years he has been in charge of day-to-day relations with the entire field of competitors and manufacturers, as well as managing promotion and marketing worldwide for the Dakar Rally.

A major part of what SCORE does for its race is provide high-quality, well-trained and significant numbers of medical and rescue personnel to provide professional assistance as needed at each event. Directed by Rigoberto Lozoya, Cruz Roja de Mexico (Mexico Red Cross) provides extensive equipment and trained personnel throughout the course. For this year’s Tecate SCORE Baja 500 Cruz Roja will have nine 4X4 rescue vehicle spread out along the course as well as a major command transporter in the start/finish line compound. The race will be televised on a delayed basis in the USA, Canada and U.S. Territories as a one-hour special on the CBS Sports Network. The show, being produced by SoCal’s acclaimed BCII TV, will air for one week on the CBS Sports Spectacular show with the initial airing at 9 p.m. ET on Sunday, July 20, 2014. Following a week of airing the CBS Sports Network telecasts, the Tecate SCORE Baja 500 show will air worldwide in over 100 countries through international distribution.

SCORE’s next international broadcast will be the show from April’s Inaugural SCORE Imperial Valley 250 which will air first at 9 p.m. ET on Sunday, June 15 on the CBS Sports Network.