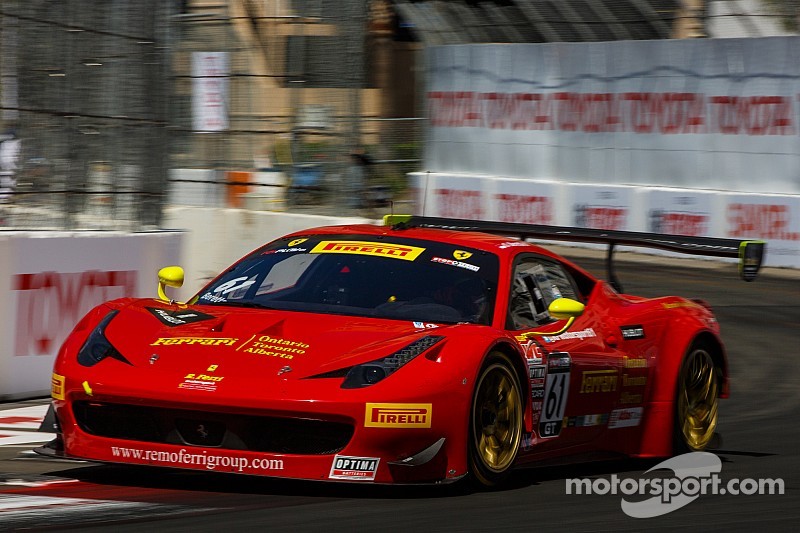 The caution-marred race became a game of survival, more than a sprint to the finish.

LONG BEACH, Calif. - Olivier Beretta of Monte Carlo won the Round 5 GT Streets of Long Beach race, at the Pirelli World Challenge 'Roar by the Shore' presented by Replay XD, part of the Toyota Grand Prix of Long Beach. Michael Lewis, of Laguna Beach, CA won in GTA, while Colin Thompson, of Doylestown, PA won in the GT Cup presented by MOMO class. For Beretta, it is his third win of the 2015 season. Lewis and Thompson each scored their fourth wins of the season.

From the standing start, pole-sitter Beretta, in the No. 61 Ferrari of Ontario/Toronto/Alberta R. Ferri Motorsport Ferrari 458 GT3 Italia took the lead into turn 1. Johnny O'Connell, of Flowery Branch, GA, in the No. 3 Cadillac Racing Cadillac ATS-V R GT3, who started third, passed second-on-the-grid Kevin Estre, of Lochau, Austria, in the No. 9 K-PAX Racing McLaren 650S GT3. Ryan Dalziel, of Windermere, FL, who started fourth in the EFFORT Racing/World PMO Porsche 911 GT3R tucked in behind coming out of turn 1. Lewis, in the No. 41 EFFORT Racing/Curb-Agajanian Porsche 911 GT3R led in GTA.

I don’t think it was my mistake, it was just that on a street race right there, we could not be three wide

Behind the leaders, Bret Curtis, of Austin, TX, in the No. 32 Turner Motorsports/SPECTRA Resources Corp/United Steel Supply/Valspar Paint BMW E89 Z4 GT3 stalled and his car remained wounded on the front straight bringing out a full-course yellow.

In GT Cup, Thompson, in the No. 11 Porsche of Bucks County/Penn Valley Constructors/Sherwin Williams Automotive Finishes/Austin Hatcher Foundation Kelly-Moss Motorsports Porsche 911 GT3 Cup maintained his position from pole in class as the race went yellow off of the start due to the stalled car of Curtis.

Off of the lap 2 restart, Beretta lead O'Connell, while Dalziel got around Estre for third. Ryan Eversley, of Atlanta, GA, in the No. 43 RealTime/Acura Motorsports/HPD Acura TLX-GT following in behind in fifth. Behind the leaders, contact between the No. 05 of Bryan Heitkotter, of Fresno, CA, and the No. 20 Bentley/Breitling/Mobil1 Team Bentley Dyson Racing Bentley Continental GT3 of Butch Leitzinger, of Rebersburg, PA coming out of turn 5 resulted in a damaged No. 20 car sitting on the track bringing out a full-course yellow. The incident resulted in a drive through penalty for Heitkotter.

In GTA, Lewis maintained his lead ahead of Martin Fuentes, of Mexico City, MX in the No. 07 Hublot/Samsung/Under Armour/Telcel Scuderia Corsa Ferrari 458 GT3 Italia. Lewis sat 7th overall in GT with Fuentes 8th.

In GT Cup, an incident through turn 11 under the yellow collected Thompson moving Sloan Urry, of Salt Lake City, UT, in the No. 2 Engel & Volkers TruSpeed Autosport Porsche 911 GT3 Cup into the lead in class.

On the lap 7 restart, Beretta held his lead over O'Connell into turn 1, while Estre made a deft pass over Dalziel to grab third. Eversley slotted in behind them in fifth. Lewis maintained his lead in GTA and 7th overall in the race with a great restart, while Fuentes remained in second and 9th overall. Thompson had a tremendous restart and rocketed up to first over Urry and Phil Fogg Jr., of Portland, OR, in the No. 18 Zoro/Truspeed TruSpeed Autosport Porsche 911 GT3 Cup.

Another full-course yellow occurred on lap 9 when Robert Thorne, of Littleton, CO, in the No. 6 K-PAX Racing McLaren 650S GT3 went too deep into turn 11 and contacted the No. 66 DragonSpeed Bayshore Racing Mercedes-Benz AMG SLS GT3 of Frank Montecalvo, of Highlands, NJ. Andy Pilgrim, of Boca Raton, FL in the No. 8 Cadillac Racing Cadillac ATS-VR GT3 was also collected in the incident. The incident left Montecalvo's car wounded on the front straight. Thorne received a drive through penalty for the incident.

On the Lap 14 restart, Beretta again won the drag race to turn 1 over O'Connell, with Estre, and Dalziel holding positions. A big mover on the restart was Chris Dyson, of Pleasant Valley, NY in the No. 16 Bentley/Breitling/Mobil 1 Team Bentley Dyson Racing Bentley Continental GT3 who moved up to fifth.

Three-wide for the lead ends disastrously

On the Lap 16 restart, Beretta led Dalziel and Dyson, with Lewis still leading over Fuentes in GTA and Thompson still leading Urry.

On lap 20 another full-course yellow was issued for an incident with multiple cars at turn 11. On the restart, Dyson got a great jump and passed Dalziel to take over second through turn 1. Dyson earned the Cadillac ATS-VR Move of the Race for the move. Lewis jumped up to fourth overall on the restart.

As the checkers flew, Beretta won over Dyson in second, and Dalziel third. Lewis won over Fuentes, with Erix Lux, of Buffalo, NY, in the No. 08 Rembrandt Charms/Monticello Motor Club DragonSpeed Mercedes-Benz AMG SLS GT3 in third. Lux won the Optima Batteries Best Standing Start Award for gaining four positions off of the start.

In GT Cup presented by MOMO, Thompson won, with Mitch Landry, of Lake Charles, LA, in the No. 97 Deep South/VersaCrane Landry Racing Porsche 911 GT3 Cup in second, and Victor Gomez, of San Juan, Puerto Rico in the No. 81 Porsche San Juan DragonSpeed Porsche 911 GT3 Cup, in third. Urry, ended up in fifth.

Of note, James Sofronas, of Pound Ridge, NY, in the No. 14 GMG Racing/Spyder/Mobil 1 Audi R8 LMS Ultra was awarded the VP Racing Fuels Hard Charger Award for gaining 14 positions during the race. JD Davison, of St. Petesburg, FL, in the No. 33 AE/ReplayXD/NISSAN NISMO GT-R GT3 was awarded the Invisible Glass Clean Pass of the Race Award for moving up from 15th to sixth on the lap 2 restart. The MOMO Turning Point of the GT Cup Race was the turn 11 incident that collected Thompson and shuffled the lead to Urry.

“It was difficult because each time you went under yellow, you had to restart everything,” said Beretta. “Each time on the restart, it is a challenge. I’m happy with the result, I just feel sorry for Johnny (O’Connell) — we went three wide into the corner and there was contact. I am sorry for him — I don’t think it was my mistake, it was just that on a street race right there, we could not be three wide. This is a very good series, a very good championship. I have a very good team, they work very hard to give me this car. It is good for Ferrari. This is the last year for this 458 Italia, so we need to win the most that we can."

"It's been a really great season in the Porsche so far and I want to thank my team owner Mr. Toups who is always enthusiastic as is the team," said Lewis. "Honestly, the fourth place overall I wasn't really expecting. I was driving around in 7th and focused on the GTA race with Fuentes who was pressuring on the restarts. The wide track into narrow spaces made it a challenge to work through. And with those corners were some tangles around me. With all of the restarts, we were just trying to survive. Really pleased on the win in front of my home crowd. Congratulations to my teammate (Dalziel) on his podium. The Porsches are really hooked up. I can't thank my team enough for the support on the restarts."

"The Kelly-Moss boys put on a great show in the garage which allows me to put on a great show on the track," said Thompson. "We were just focused on the same type of expectations as we went into St. Petersburg. We know that the only way to get the victory is to survive and play it safe during the race. We were just thinking about the championship and if it meant losing victory today, then we were prepared to give up a position on the track."

With the win, Beretta builds his championship points lead over Dalziel (572-514) in GT, with Lewis continuing to lead in GTA. In GT Cup, Thompson leads over Trefethen (603-449).

Fifth place for Davison on the mean streets of Long Beach