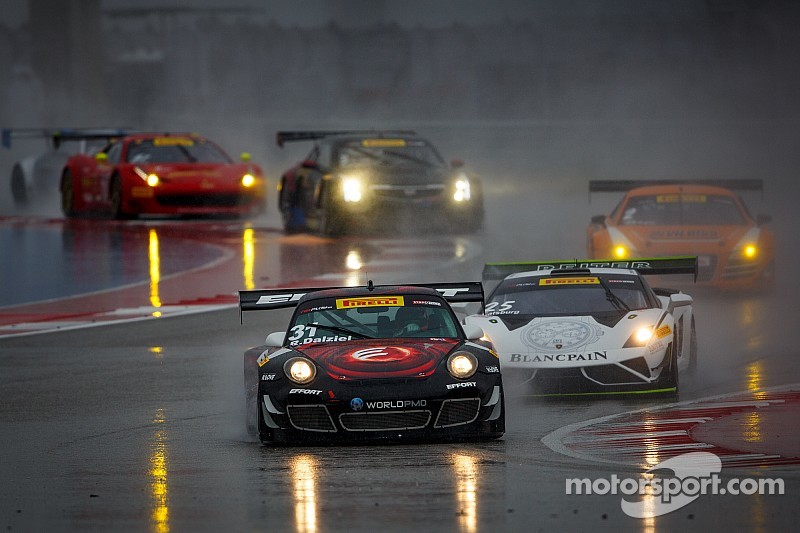 Weather hampered the second-day crowd, but not the competition

AUSTIN, Texas -- Just prior last weekend’s to the Nissan Grand Prix of Texas Brought To You By Mogul, we wondered aloud: Can the Pirelli World Challenge series pull of a standalone weekend at a major track like Circuit of the Americas?

The answer: Yes, but with a couple of footnotes.

In its 26-year history, the PWC has proven to be a capable, popular opening act for series like IndyCar, a capacity it will serve in at its next race, in St. Petersburg, and the next race, at Long Beach. But the PWC chose to kick off its season with a weekend show in Austin, Texas, in March, where the weather can be a factor. And it was. The last time the PWC visited COTA was in May, 2013, partnered with the Australian V8 Supercars.

The V8 Supercars were popular, but a change in management recognized that packing up all the cars, equipment and teams for one race in the U.S. just didn’t make financial sense. Likely the V8 Supercars will return in the next year or two, but with two or three races in the U.S., to help amortize the costs.
This left the PWC without a date at COTA for 2014, but they came back in a big way last weekend with well over 100 entries in what is now seven classes.

The good news is those seven classes are combined into four races – the headlining GT, with GTA and the Porsche 911 GT3 Cup-only GT Cup class.

The Touring Cars – TC, TCA and TCB – all run together, made possible by using COTA’s full 3.4-mile course, compared to the shorter course used the last time the PWC was here.

The seventh class, GTS – largely Chevrolet Camaros and Ford Mustangs – ran separate races. But there was also an eighth class at COTA -- the all-Porsche GT3 Cup Trophy USA – and they ran separate races. The Touring Cars ran three races, and everybody else ran two.

Please refer to your program...

Confusing? Yes, even to veteran fans, but especially to novices. Having either Porsche 911s or Caymans in every single race, for instance, meant you literally needed a scorecard to figure out who was racing who. And having a Kia Optima race against an Aston Martin Vantage GT4, while a credit to PWC’s “balance of performance” specs, made it sometimes seem like apples were racing oranges.

That said, the action was nearly non-stop, with surprisingly deep competition in every class. With minimal promotion, no one expected a full house and there wasn’t one, but Saturday’s crowd was respectable. Sunday’s was miserable, just like the weather – drizzle or rain all day, with temperatures hovering around 50 degrees. In the afternoon, officials wisely moved up the races, which may have annoyed the fans at home watching live at World-Challenge.com, but it was appreciated by those actually there.

Overall, we have to judge the event a success. We asked one team owner what he thought: “Good – there were a few organizational problems, but for a first event, we have to give them a pass. Everybody delivered.”

But in 2014, Kia, with its Kinetic Racing team, became the first Korean automaker to win the Pirelli World Challenge GTS Manufacturer Championship with five wins. Driver Mark Wilkins returns for his fourth season, joined by British newcomer Ben Clucas, who made his PWC debut. And it was a solid one: He started eighth on Sunday, and moved up to finish second, behind the Z/28 of Michael Cooper.

“The Kia was fantastic,” said Clucas. “In this morning’s warm-up we struggled a bit. So I didn’t really know how we were going to fare. Kinetic did a fantastic job making changes to the car and we were worried a little bit that we wouldn’t make pre-grid. We were changing a lot. When we got out there it was like night and day and I was able to maintain a really good pace and I managed to pick my way up to second.” Wilkins was sixth, behind three Boss 302 Mustangs.

Animal instincts: Race fans have seen that Mazda Motorsports has supported animal welfare groups in general, and the SPCA for Monterey County in particular, since 2007, promoting shelter animal adoptions at multiple races every year.

At COTA, local Mazda dealer Roger Beasley Mazda was also involved. Turns out the Beasley people have been actively supporting the Austin Humane Society (AHS) since 2004. Most of the Mazda racers at COTA carried custom license plates supporting the effort. EASTEX Motorsports Mazda MX-5 Racer Adam Poland hosted the AHS volunteers who sold raffle tickets to win a 2015 Mazda MX-5. His pit area looked like a PetSmart store with a display from his newest partner, Majestic Pet Products. Among the named shelter animals at this race was “Purr-elli”. No word on how many raffle tickets the Pirelli folks bought, but sales were brisk on Saturday with a number of racers looking for a bargain racecar. Tickets to win the MX-5 are still available at: http://www.austinhumanesociety.org, Texas residents only. Mazda may do something similar at the Mobil 1 Twelve Hours of Sebring.

Driven well: Looking at the driver roster for the races, the resumes of some of the veterans are long and impressive. For instance, in GT alone, Andy Pilgrim and Johnny O’Connell in the potent, pretty new Cadillac ATS-VR GT3; Butch Leitzinger in the Bentley Continental GT3, teamed with Chris Dyson; Peter Cunningham in his Acura TLX-GT; Lou Gigliotti in an Aston Martin GT3 V12 and Duncan Ende in a Ferrari 458.

But one of the best moments was in the first race, when Ryan Dalziel pulled out a healthy lead in his EFFORT Racing Porsche 911 GT3R, but was eventually run down and passed by Olivier Beretta in his debut in the R. Ferri Ferrari 458 GT3 Italia. After the race, Beretta remarked than the driving talent in the series was impressive – pointed out when he failed to make the podium in race 2.

Lewis impresses: Michael Lewis, whose dreams being the next American driver in Formula One after four long years in Europe finally appear to have ended, is making the most of his relationship with Porsche, winning both GTA races in his EFFORT Racing Porsche 911. Lewis, who had never driven a race car with a roof on it until Porsche gave him a tryout at Barber Motorsport Park, was equally quick on dry pavement and in Sunday’s wet race.