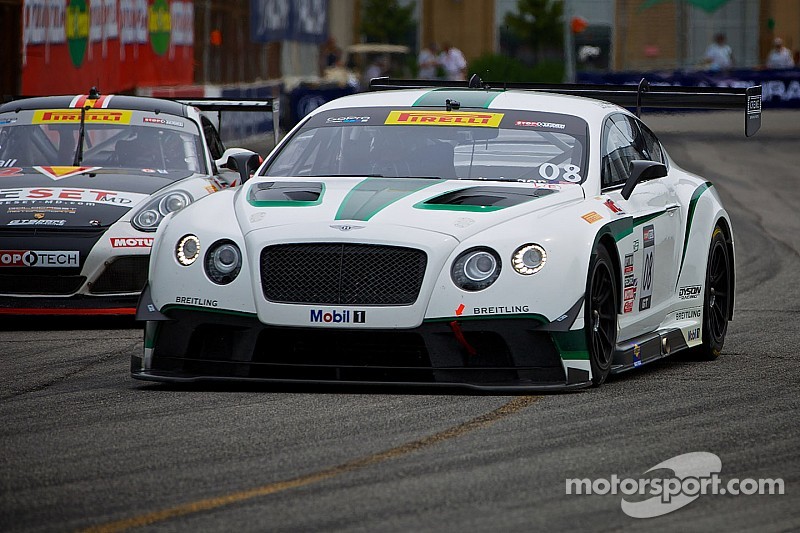 Team hopes for better on Sunday.

When it rains part way through a sprint race it tends to shake things up. A mid-afternoon storm worked against Butch Leitzinger and Dyson Racing Team Bentley in Round 11 of the Pirelli World Challenge at Mid-Ohio today. Leitzinger, who had moved his #08 Bentley Continental GT3 up from his eighth starting spot to sixth when the skies opened, emerged from the pits for rain tires in 12th position under yellow flag conditions, but the highest-placed car on rain tires. But that’s where he finished when the race was red-flagged a few minutes later.

“We called the tire stop right and put the rain tires on at the exact right time,” Leitzinger said.  “The team did such a quick job that I was surprised when they told me to go because I thought they had only done two tires. We were the first car in the queue with wets on and all I wanted was for it to go green again and we would have made quick work to the front. But the race never restarted. The rain turned into a deluge and safety ultimately mandated that they did not restart, but we were prepared with the right strategy.”

Visiting the team this weekend is long-time Dyson Racing driver Guy Smith, who is also a veteran Bentley Boy and winner of the 2003 24 Hour of Le Mans winner for Bentley. Smith has been the lead development driver for the global Bentley Continental GT3 race program.

Currently driving in the Blancpain Endurance Series in Europe in the M-Sport Bentley Continental GT3, Smith has two wins to his credit this season, at Silverstone and Paul Ricard.  He recounted the work that went into making it a winning race car.

“The Continental GT3 made its first run at Goodwood fourteen months ago,” Smith said. “M-Sport has done a fantastic job. We did extensive testing after Goodwood.”

Smith explained that for GT3 racing when a car is homologated the manufacturer must specify many of the technical elements of the car as it will be raced, including gear ratios, suspension set up and aero configuration. Once the car is homologated these cannot be changed, so it’s critically important to get them right.

“So you have to make sure that what you decide upon works well,” Smith continues. “We did 12- and 24-hour tests and it became evident early on that we had a good car.  It was easy to drive and the balance and handling of the car was very good.

“This is what we have with the Bentley Continental GT3 – a good, reliable, quick and easy to drive race car.  Butch said that to me after the first Pirelli World Challenge race at Road America last month and said so again to me this weekend.  Butch said when he first jumped in the car and started pushing it, it felt like a proper race car. That was music to my ears.”

Cadillac Racing's O'Connell and Pilgrim 5th and 6th at Mid-Ohio