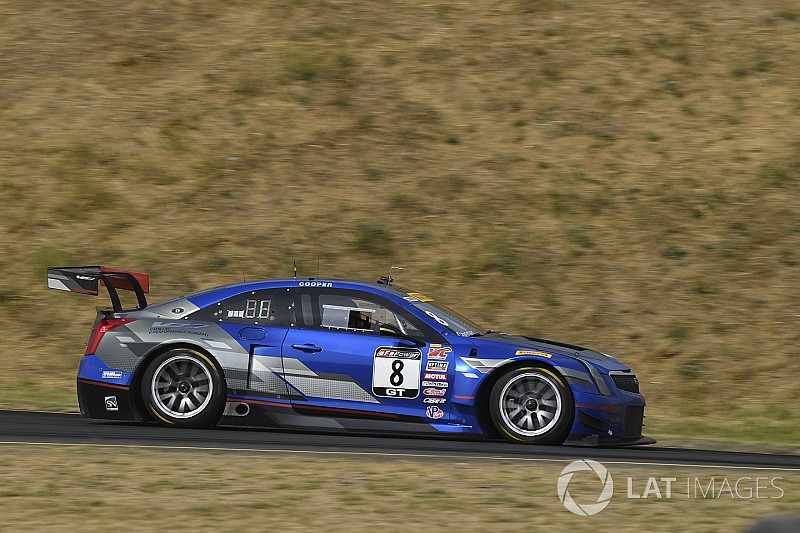 Michael Cooper’s second Pirelli World Challenge GT win of the weekend was a hard-earned one that required him to remain cool under pressure, as Pat Long and Pierre Kaffer battled in his mirrors over the second half of the race.

There was a full-course yellow within two corners, as behind the fast starting Michael Cooper (Cadillac ATS-V.R) and Patrick Long (Wright Motorsports Porsche 911), Alvaro Parente’s K-PAX McLaren 650S was tagged by the TR3 Ferrari 488 of Daniel Mancinelli at Turn 2. The contact spun the McLaren around into the sand on the outside, where he was struck by Ryan Eversley’s Acura NSX.

Mancinelli’s Ferrari was relatively unharmed so he was lined up third behind Cooper and Long for the restart. Behind, ran Pierre Kaffer’s Audi R8, Bryan Sellers in the second K-PAX McLaren, Jon Fogarty’s Gainsco/Stallings Porsche, Peter Kox’s Acura, Ryan Dalziel in the CRP Mercedes AMG GT, Johnny O’Connell in the second Cadillac, and Alec Udell in the second Wright Porsche.

The single-file restart with 39mins to go, on Lap 5, was perfectly clean and Cooper tried to make a break but Long hung strong. However, Mancinelli was adjudged to have been at fault in the shunt and the Ferrari was brought in for a two-minute stop-n-hold penalty.

Cooper and Long pulled 2.5sec on Kaffer within two laps, but there the gap steadied. The primary action at this stage came from Dalziel’s vigorous attempts to separate Kox’s Acura from sixth, while behind them O’Connell was hoping to take advantage if the pair were to lose momentum in the heat of battle.

Long was giving Cooper no rest at the front, having a long look down the inside into the Turn 7 hairpin on Lap 12, but on that occasion he decided patience was the wiser course of action. At the same point the following lap, Dalziel finally grabbed sixth from Kox with a perfectly executed outside pass. His next target was Fogarty, 1.5sec ahead, and two laps later he got the job done at the same spot; the Mercedes was into fifth.

Up front, Cooper pulled his lead out to 1.2sec, but now Kaffer’s Audi was a similar distance behind Long, having pulled out over six seconds on Sellers’ McLaren. Long got the message and renewed his attempts to get on terms with Cooper and on Lap 20 he got so close to the Cadillac in front that he missed the apex and allowed Kaffer right onto his rear bumper. Long’s attention switched to defense and fell 1.5sec behind Cooper.

That gap closed over the final couple of laps, but Cooper had it all under control and thereby doubled up on race wins for the weekend. This year’s PWC GT champion, Long, was 0.88sec behind and only a couple of tenths ahead of Kaffer.

Sellers was 12sec further back, able to hold of Dalziel’s Benz, while Fogarty just ahead of Kox, chased home by O’Connell, Udell and the GMG Porsche of top Amateur, James Sofronas.