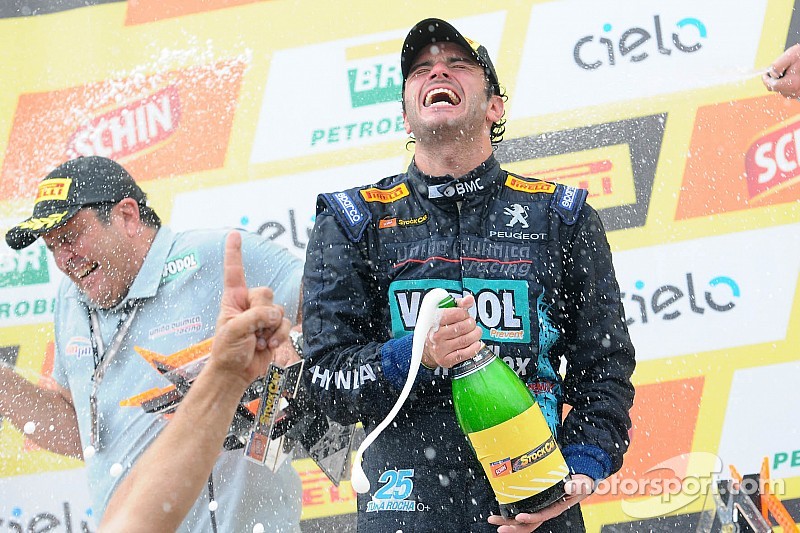 Round two of the season was the first double-header of the year. Bueno made peace with victory after 20 months of his last; an emotional Tuka wins for the first time in his Stock Car career.

Not even the heavy rain that came to Ribeirão Preto in the final hours of this Sunday morning got in the way of the great crowd that came to the street circuit located at the Industrial District, and thousands of people could watch two great races in the second round of Brazilian Stock Car Championship.

The first double-header of the season brought two different winners and two different situations. The first - and longest - race had the five-time champion Cacá Bueno beating pole sitter Max Wilson for his first victory in 20 months. Next to him at the finish line were local hero Marcos Gomes and Julio Campos.

After a 40-lap-thriller which started with a wet track and the safety car holding everyone up for the first three laps, the crowd could see battles going on everywhere on track. Top-10 drivers would start race 2 in reverse grid position, when the tarmac was already dry.

The problem then was Marcos, who came out of nowhere and made things more difficult, but I could hold on to win the race...

Stock Car regulations determined that any change in the car between the heats should be penalized. Many drivers changed tyres in the end of race one or at the beginning of race two. But both Eurofarma-RC drivers Max Wilson and Ricardo Maurício changed tyres between heats - and were excluded by the race director from the first heat results.

The second race brought a mix of strategies, and those who opted to change to slick tyres at the end of the first one took the lower risk. During the first laps, the top ten had only two drivers using the Pirelli slicks: Tuka Rocha and Sérgio Jimenez - exactly the ones who finished in a one-two order. Átila Abreu performed a stunning recovery to be the third driver to see the chequered flag.

It was a soul-cleansing victory which shows that I have the capacity and the talent to be here.

Tuka Rocha signed his contract with União Química/Bassani Racing only one week prior to the first race in Goiânia, and his sponsorship contract is only up to the first six rounds of the season. In his fifth year in Stock Car racing, it was also Tuka’s first podium finish - and already with a win.

His five-points finish scored with a tenth place became zero and now Marcos Gomes dropped to second position on the championship with 31 points. The new series leader is now Cacá Bueno, with 33.

The championship is scheduled to April 26th at the Velopark track, in southern Rio Grande do Sul state.

Cacá Bueno (winner of heat 1): "I bet the track was going to dry out before the end of race one and that strategy paid out. We choose the dry-track setup and it was tough to keep up with Max, and at the same time I had to save my rear tyres. He opened a five-second gap and as soon I realized the gap wasn’t going to increase any further I decided it was the time to catch him up. When it started to get really dry my setup worked better than his. I made a move on turn 2 but he paid me back, but afterwards he missed a breaking point I could go through. The problem then was Marcos, who came out of nowhere and made things more difficult, but I could hold on to win the race".

Tuka Rocha (winner of heat 2): "It was a soul-cleansing victory which shows that I have the capacity and the talent to be here. I hope this can be a turning point in my career so I can be here for a long time. We will keep working as hard as we can. Things aren’t easy, but I only have to thank and celebrate, because today we are going to party".

Brazilian Stock Cars take the streets for round two