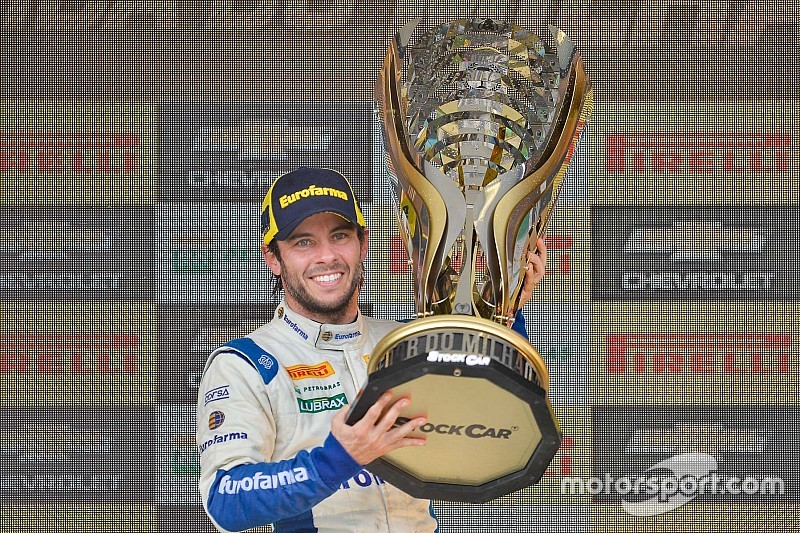 Guest driver Lucas di Grassi lost the showpiece ‘Million Race’ round of the Brazilian Stock Car series after ignoring a penalty for a move on teammate Ricardo Mauricio, which led to his disqualification.

The Million Race is the most anticipated event in the Brazilian Stock Car schedule, giving the winner R$1million (approximately US$250,000) with invited drivers and specific rules for the weekend. Di Grassi took pole position and led the early stages, but his teammate Mauricio moved ahead of him during the mandatory pitstops.

With about 10 minutes left from 40 predicted, di Grassi passed Mauricio using the Interlagos pitlane entrance. The maneouvre was considered illegal, and the race stewards punished di Grassi with a drive-through penalty.

Di Grassi did not serve the penalty within three laps – as per the regulations – so he was disqualified from the win. He later complained that his team was not informed that he could have returned the position to Mauricio without the need for a penalty.

“That was a little peculiar move,” said di Grassi. “I went through inside Ricardo, he closed me a little to protect his position, I went inside and then, making the decision to stay inside, cut off a piece of the track, but in my head I didn't gain any advantage for doing that.

“I was in front of him the moment I used that part of the track. You can only be punished if you go out with all four wheels and gain [an] advantage.”

Mauricio was handed the win, with Gabriel Casagrande second, followed by two-time Le Mans class winner Daniel Serra, who continues to lead the championship. This was the second time veteran driver Mauricio has won the Million Race, his first being in 2010.

“My strategy when I was fighting with Lucas, was to try to use as much of the overtake button as possible,” said Mauricio. “We knew that Lucas had a big advantage and came very strong for this victory, and it was very difficult to maintain the first position. He won the fan push [like Formula E FanBoost], so when I was in front of him [after the pitstop cycle], I had three pushes, and Lucas six. The victory came for free.”

Ex-F1 star Rubens Barrichello started at 11th, advanced to ninth place, but had issues with the fuel pump and was forced to retire.

“We have had this issue since Friday, which has not been resolved unfortunately has hurt us all weekend,” he rued. “Thinking about what you lost, what you gained, there is not much to talk about. The important thing is to solve the problem and become competitive again at the next round.”