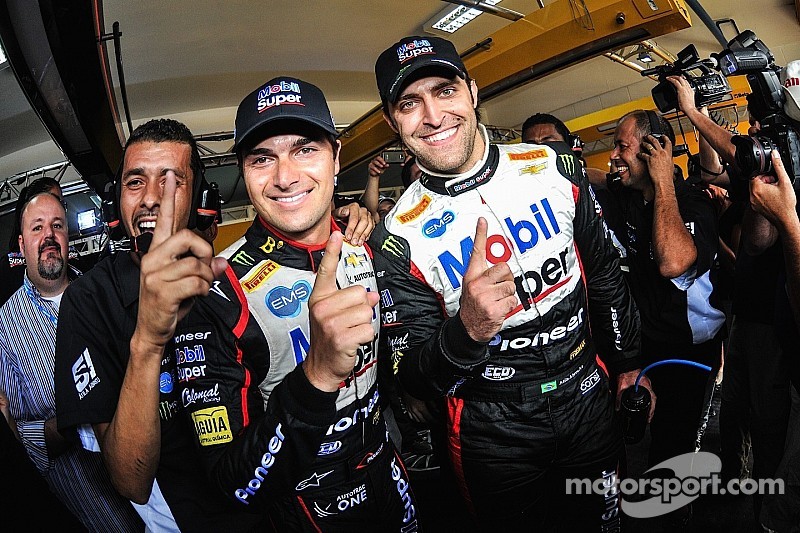 Marcos Gomes and Australia’s Mark Winterbottom join them on the first row of the grid in the Race of the Duos, the opening round of Brazilian Stock Car Championship.

The regular drivers made their laps, split in two groups. Then, the invited ones took the wheel and did the same. The average between the best lap made by driver and co-driver set the time for qualifying. Under those rules, the #51 car, by Átila Abreu and Nelson Piquet Jr, took pole position.

From second to eight position, with the exception of Lucas di Grassi in fifth with Thiago Camilo, the foreign co-drivers showed a quick pace. Mark Winterbottom second, partnered by Marcos Gomes, who will make his 100th Stock Car start; Valdeno Brito comes in third sharing the Shell #77 car with GT ace Laurens Vanthoor.

Quotes by the drivers

Átila Abreu #51 (P1): "Starting the season on pole position is fantastic, especially after the problems we had in the previous sessions. I think Nelson has made the difference, he managed to make an excellent laptime and take P1".

Nelsinho Piquet #51 (P1): "To race close to my hometown Brasília is somehow refreshing. I came with my own car and it feels like home. When I was driving in qualifying the track was a little quicker than in the previous group, but I can’t take all the credit. I think the friendship I have with Átila and the excellent relationship with the team made everything a lot easier".

Marcos Gomes #80 (P2): "Not bad. It is my 100th start and the first race in the team, and we couldn’t got along in a better way. I made my best and got the fastest lap of the group; then the track conditions changed a little bit, but it’s great anyway. Mark did an amazing job and we have a long race tomorrow".

Mark Winterbottom #80 (P2): "It’s been great for the team; front-row start is very positive. We’ve made some changes in the car: this morning I was very happy with the car, but in qualifying I felt pretty uncomfortable, but Marcos did a great job. We can win the race, and I think we are in a good position".

Antonio Félix da Costa #18 (P6): "One more time we had some issues in the morning, and we almost didn’t drive. But in qualifying I could feel the car better, the track was dry and in the end of the day it is not a bad position at all. Although I think we could be closer in the front, and the race can go really well tomorrow".

Vitantonio Liuzzi #110 (P8): "We had some problems. When I jumped in the car I felt the engine quite a lot down on power. Overall it is not bad to start in P8. We are in a good shape, the setup is good, we have a good pace and Felipe is doing a really good job. We are competitive for tomorrow, and our target is to achieve a podium position, and we know how hard it is. But it would be a good achievement for our team".

Laurens Vanthoor #77 (P3): "I got quite happy with my lap. We improved the car setup and starting from second row we can think in a good strategy to fight for the win. Of course it won’t be easy, because the grid is packed with great drivers and everyone are really close".

Jacques Villeneuve #10 (P18): "I got a little disappointed because I couldn’t drive on the dry track during the weekend. The laps today were really the first ones I did in good conditions. At the end of quali I was quicker, two or three tenths better each sector, but then I spun. It was worth a risk because this little improvement could put us ten positions in front on the grid. Stock Car is really competitive and the car is quite difficult to drive, and that makes this experience even funnier".

Jaime Alguersuari #14 (P24): "It was difficult, very difficult. Especially because of the track changing a little bit from this morning, and in any case we weren’t quick as well. I don’t have much experience in this car. We expected rain but it didn’t, so I hope for some rain tomorrow because in the dry we are quite far away from the others".