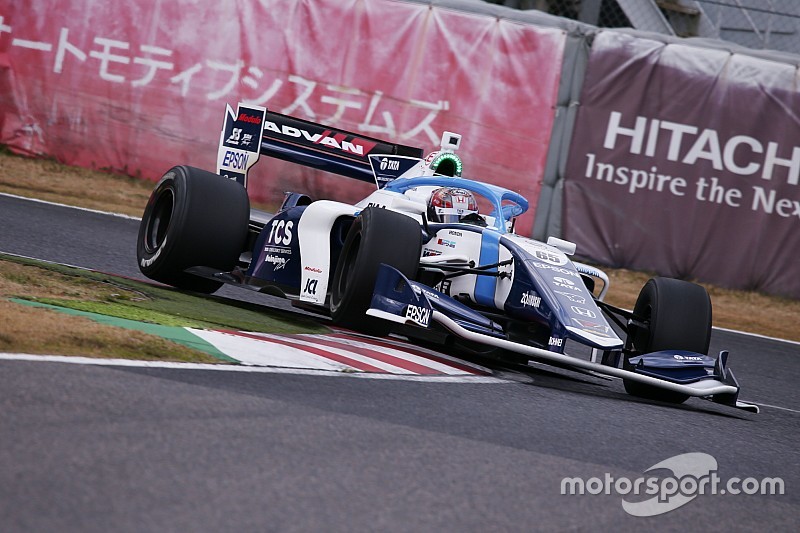 Palou had topped the first two legs of qualifying and looked set to take pole after clocking a time of 1m36.312s around the 5.8km Japanese Grand Prix circuit.

However, Makino was the last driver to cross the line in Q3 and manage to shade his teammate by just 0.029s, ensuring a front-row lockout for Nakajima Racing.

It marked the first for pole for the Satoru Nakajima-led outfit in nine years, with Takashi Kogure the last driver to claim top spot in qualifying for the squad at Motegi in 2010.

Defending champion Naoki Yamamoto qualified third on his first outing with Dandelion Racing, but over a quarter of a second down on the leading pair.

Nirei Fukuzumi was classified another tenth down in fourth, completing an all-Dandelion row two, with Yuhi Sekiguchi (Impul) the top Toyota-powered driver in fifth.

Kenta Yamashita finished sixth fastest for Kondo, ahead of Ryo Hirakawa in the second of the Impul entries and the KCMG car of Kamui Kobayashi.

Kondo driver Yuji Kunimoto and Mugen’s Tomoki Nojiri completed the top 10, the two separated by 0.110s in the second part of qualifying.

Double Super Formula champion Hiroaki Ishiura (Inging) missed out on the Q2 cut by just over a tenth of a second, while Red Bull junior Dan Ticktum (Mugen) was likewise knocked out in Q1.

Ishiura will line up 14th on the grid, his worst starting position since 2017, two spots ahead of Ticktum.

Harrison Newey stayed on track after losing control of his B-Max car at the exit of Spoon corner, but was collected by TOM’S driver Kazuki Nakajima, who attempted to pass him on the inside.

The four aforementioned drivers will prop up the field, with Newey starting 17th, ahead of Nakajima, Markelov and Tsuboi.

The first round of the Super Formula season will be available live and for free on Motorsport.tv.