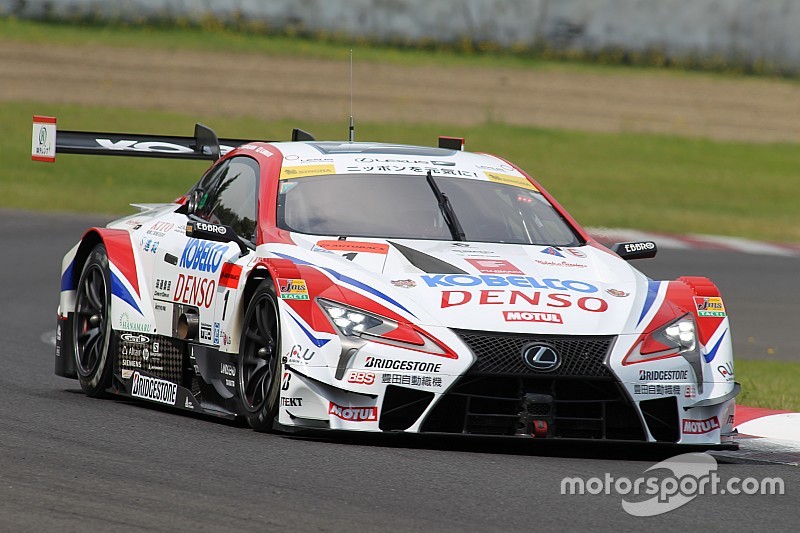 The #1 Team SARD Lexus duo of Heikki Kovalainen and Kohei Hirate claimed their first victory in the 2017 Super GT season at Sugo after a last-lap tussle with the #46 MOLA Nissan.

The first half of the race was in tricky wet conditions, with the #100 Team Kunimitsu Honda of Naoki Yamamoto and Takuya Izawa comfortably leading after passing the pole-sitting #8 ARTA Honda.

However, two safety car stints happening in quick succession mixed things up, as several cars, led by led by Team SARD's Kovalainen from third, pitted for slicks after the first one.

The decision paid off when the #55 Aguri BMW and the #51 LM Corsa Lexus GT300 cars crashed into each other, leading to the deployment of another lengthy caution period.

As a result, when Kunimitsu and the #65 Nakajima Racing Honda, second at that point, pitted following the second safety car phase, they rejoined well behind the #1 SARD Lexus, now driven by Hirate.

The Japanese driver initially looked set to take an untroubled victory before a late challenge by the #46 MORA of Satoshi Motoyama - who shares the Nissan GT-R with Katsumasa Chiyo - brought the race alive again.

The two drivers briefly touched on the final lap with the Nissan losing a part of its bodywork in the incident. This allowed Hirate to cruise to the finish line and continue Lexus’ winning streak in 2017.

The #6 LeMans Wako Lexus of Kazuya Oshima and Andrea Caldarelli took the final spot on the podium to emerge as the new championship leaders.

The #23 NISMO entry of Tsugio Matsuda and Ronnie Quintarelli was next up in fourth, while the best Honda could manage a fifth place finish with the #8 ARTA squad.

Much like in the flagship category, the order in GT300 was turned upside down by safety car periods.

The #65 Leon Mercedes drivers of Haruki Kurosawa and Naoya Gamou dropped down to seventh after the two SCs, having led the race before they were deployed.