The qualifying for the MOTEGI GT 250KM RACE, Round 8 of the 2011 AUTOBACS SUPER GT, took place at the Motegi Twin Ring (lap = 4.801 km) in Tochigi Pref. on Oct. 15. In the qualifying, the S Road MOLA GT-R driven by Masataka Yanagida won the GT500 class pole position. With this result, the S Road MOLA GT-R (Masataka Yanagida/Ronnie Quintarelli) will start from the front row in the final race on the 16th.

The qualifying for this round was run in a knock-out format. In this system the official qualifying stage is run in three sessions (Q1, Q2, Q3). In the first two of these sessions the slowest qualifiers are “knocked out” of the competition and not able to move on to the next session. Then the race grid order for the top places is decided by the time trial performances of the teams remaining in the final session (Q3).

On this day rain fell quite heavily on the Motegi track from the morning hours. In the 40-minute Q1 session, which started from 13:05, a number of machines suffered spin-outs or ran off the track, and the session had to be stopped at one point. Through these bad conditions it was the leading team in the season ranking, the S Road MOLA GT-R, driven by Ronnie Quintarelli that recorded the fastest lap time with a 1’52.389. During the ensuing 10-minute Q2 session, Quintarelli ran a 1’52.529 and again bested all the competitors. 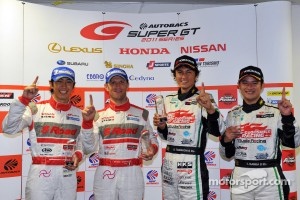 Finally, Q3 was contested by the seven remaining qualifiers. Amid stiffening rain in this session it was Masataka Yanagida who took the wheel of the S Road MOLA GT-R. While the other drivers had struggled to keep control on the slippery track, Yanagida seemed to have no trouble in the GT-R during his “time attack.” He recorded the fastest time of this session at 1’54.662 to give his team their third pole position of the season. For Yanagida, it was his third career PP in the GT500 class.

In the GT300 class the HATSUNEMIKU GOODSMILE BMW driven by Nobuteru Taniguchi also got its third pole position of the season. Taniguchi and his teammate, Taku Bamba, presently stand in 2nd position in the season ranking and will be aiming to turn the tables on the current leader with a front-row start in tomorrow’s race. That ranking leader, the JIM GAINER DIXEL DUNLOP 458, qualified 2nd today to show that it will not be easy to beat. It looks like the GT300 will be a head-to-head battle at the front between the only two title contenders.

No. 46 S Road MOLA GT-R [GT500]
Masataka Yanagida: “This final round will determine the championship, and since it is a no-handicap race, our team has come here with a strong desire to win this race. I am very glad that I have helped increase the chances of a win by getting this pole position. In Q3 the track condition was good during my first two laps. But, at the end it worsened and I was hydro-planing. I didn’t hear anything about my position from the pit (over the shortwave during the time attack) and a deliberately avoided looking at the clock tower, where I could have seen my position if I wanted to. When I finally looked at the tower at the end of my run an saw that I was on top, it was a big relief. Everyone has been talking about our chance to win the title but, like always, I just want to think about winning this one race. [Our title rival] car No. 23 is a strong competitor and I’m sure they won’t give up till the end. So we have to put up a good fight and do our best if we are going to win.”

Everyone has been talking about our chance to win the title but, like always, I just want to think about winning this one race.

Ronnie Quintarelli: “Both the car and the tires performed well today. I was confident that we could win the pole position, and we were able to get important data today for our tire choice if the track is wet for the race tomorrow. We owe this pole position to the team manager, the engineers, and the Michelin tire staff. Yanagida ran a good lap for us like I knew he would. If it is clear and dry for the race tomorrow, we will be going in blind with regard to our dry tire choice, but that is true for all the teams. So the whole team will be talking together to prepare for those decisions. Of course, I am confident we can win.”

No.4 HATSUNEMIKU GOODSMILE BMW [GT300]
Nobuteru Taniguchi: “I thought our car would have a disadvantage in the rain because it doesn’t have a mid-ship mounted engine like [our title rival] car No. 11. But during this morning’s practice run, the grip of our Yokohama tires was excellent and to my surprise we were able to record the fastest time. That made me determined to go for the pole position. In Q2 Bamba was fast, too, and ran the top time. This gave me confidence for the qualifying and for tomorrow’s race. During my [Q3] time attack I was told from the pit to pick up the pace because other teams besides No. 11 had been fast too. In tomorrow’s race I hope we will be able to run away to victory like we have in or last two [pole to win] victories.” 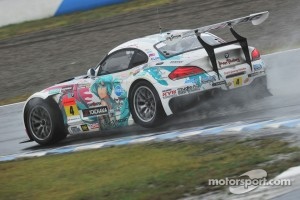 Taku Bamba: “I am very happy that we got this pole position. Before coming to Motegi this time we had a lot of meetings as a team. And, since I lost us some places in our last race, I am very determined to do my best this time. The car was very stable even in this rain, and the tires were excellent. The mechanics did such a perfect job of setting up the car that I was able to clear Q2 with the fastest time. In tomorrow’s race I am determined not to let anyone past [like I did in the last race] and race hard all the way to the checkered.”