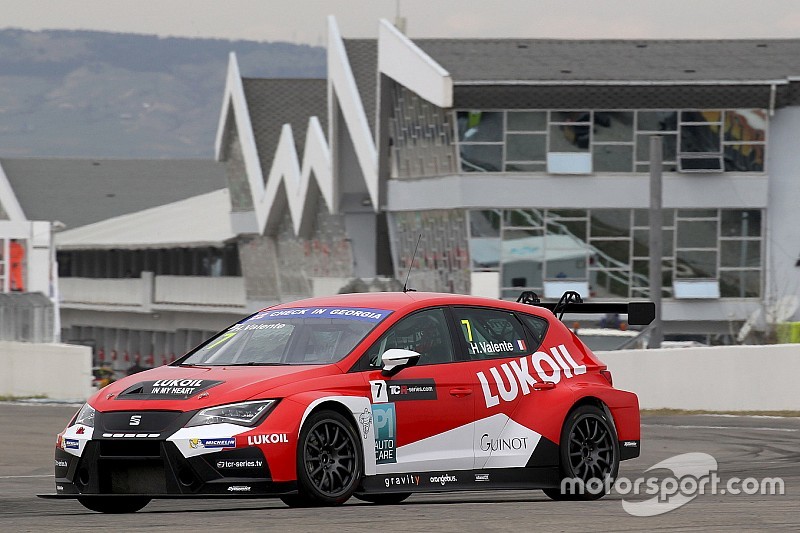 Lukoil Craft-Bamboo Racing are seeking a TCR International Series opening round victory in Georgia this weekend, confident that their lineup of James Nash, Pepe Oriola and Hugo Valente can deliver a winning performance. Rustavi Motopark in Georgia kicks off TCR’s third season and brings international motorsport to the country for the first time. It also provides a uniquely challenging opening round for the entire grid who will be taking on the 4.1km circuit with no previous experience. Lukoil Craft-Bamboo Racing has featured on every opening round podium since the TCR International Series began in 2015 and is determined to continue this streak of success in Georgia.

Hugo Valente will get his TCR International Series career underway this weekend, and he will be tasked with quickly getting accustomed to the SEAT Leon TCR racer. The Frenchman was able to get some testing time in before the start of the season and has been working hard on the transition from the WTCC, but he will be up against some stiff competition from his teammates. However, with the Rustavi Motopark a new circuit for 2017 and Valente’s years of experience as a top level touring car driver; the Frenchman may be able to pull off a round one victory and will be aiming for nothing less than the podium this weekend.

James Nash returns to Lukoil Craft-Bamboo Racing for his second season, and after missing out on the drivers’ title last year by 3.5 points, Nash is back to finish the job. He was a force to be reckoned with during his debut, scoring the most podiums of any competitor, and after a year behind the wheel of the SEAT Leon, Nash is well prepared to kick start the 2017 competition with a trip to the podium. If his track record is anything to go by, Nash will certainly be in with a chance of glory in Georgia and might be able to get the head start he is looking for on the race to the championship title.

Pepe Oriola, one of the TCR series’ most successful drivers, embarks on his third championship fight with the team in Georgia. The Spaniard has always been at the sharp end of the standings and a constant front-runner for the championship over the past two seasons. Oriola has produced two masterful opening rounds over the past two years, collecting two second place podiums and two victories. He is surely one of the strongest contenders for 2017’s maiden round and will be fighting to gain an edge over the rest of the field with his energetic driving style that has found him so much success in the past.

“We are really keen to get the season underway at the Rustavi Motopark but it is a little bit difficult to predict the form before the BoP is released. We are very pleased with the work we did in testing recently and we feel more prepared than we have for TCR in the past. It is important for the whole team to get off to a good start and get along well together in a race weekend environment for the first time. Our intentions are clear in both championships and anything less than a win this weekend will be a disappointment.”

“I've honestly been counting down the days to the start of the season in Georgia, I'm both very excited and motivated! It's going to be a great feeling being back in race mode. I now feel more confident and comfortable within the team and in the car thanks to our test in Adria a couple weeks ago. I still have a lot to learn in terms of the car changing behavior depending on track conditions, temperatures and tyre degradation. But I'm confident we will have a strong weekend, we have a great line up in the team, the rest of the field looks very strong too and that's what high competition is all about!”

“I am really excited to be part of the Lukoil Craft-Bamboo Racing SEAT again. It's another new track for us all and I can't wait to get going in FP0. The hard work starts all over and as always points make prizes. A win is the aim but a podium would be OK."

“I am looking forward to start the season and see where our car is this year. We still don’t know the results of the BOP which is a little unnerving. I hope that the BoP is even across cars from all manufacturers so that we can all have a fair fight for the 2017 championship.”

The TCR International Series kicks off in Georgia